How athletes perceive their human rights is, at last, getting attention, says Nikki Dryden, Olympian and Associate at the Australian Human Rights Institute at UNSW Sydney. 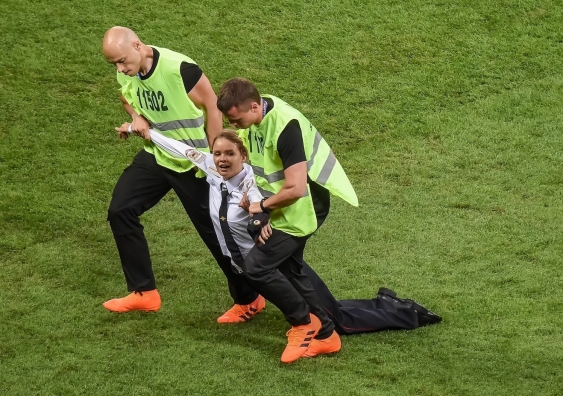 Security personnel drag a protester off the field during a World Cup football match. Photo: Shutterstock

My experience with human rights and sport started when I was 19 competing at the 1994 World Swimming Champs in Rome. There, the Chinese women won 12 of 16 events, an unprecedented event in world swimming before or since. This was devastating to many women swimmers, and yes, I was angry and frustrated…everyone was.

It was clear in the moment and later proven with positive doping results that China had systematically doped its female swimmers. But something bothered me about simply painting them as ‘cheats’. These were girls and young women isolated and without agency.

After retiring from swimming, I went to law school to become a human rights lawyer and in 2005, I researched what human rights lawyers weren’t addressing – the connection between human rights and sport. I argued that state sponsored doping (especially when it involved children) was a human rights violation requiring United Nations (UN) intervention. Neither the World Anti-Doping Agency (WADA) nor its chief – also an International Olympic Committee Vice President – listened to me. Just nine years later, Russia got caught doing the same thing, and this time the world was ready to listen.

Perhaps it’s easier to conceptualise what the world has been watching in Qatar than state-sponsored doping of athletes – the impact on human rights from mega sporting events like the '22 World Cup, the '08 and '22 Olympics in Beijing and even the Sydney 2000 Games. In almost every Olympic and World Cup host city, marginalised communities are forcefully evicted from their land and homes, the rights of journalists to free speech come under threat and the militarisation of cities preparing to host negatively impacts citizens.

When I started researching human rights and sport, sociologists and journalists were sounding the alarm bell about sport’s ugly secret. Sports bodies’ self-made policy of sports autonomy, the argument that sport is special and doesn’t require government or public oversight, meant sport officials could do whatever they wanted. And they did. My mentors, journalist Andrew Jennings and sociologist Helen Lenskyj, wrote at least a dozen books between them on the dirty, secretive, abusive, and discriminatory world of the Olympic movement specifically, and global sport more broadly.

While Andrew spoke about bad governance and corruption, it was his work that set world soccer, specifically FIFA (with the help of the US FBI and IRS) on the road to human rights. Fighting off bad press and criminal investigations, FIFA became the first sporting organisation to embed human rights into its governance and to accept the UN Guiding Principles on Business and Human Rights. At the same time, international worker unions took cases against FIFA in Switzerland over migrant worker abuse in Qatar, and Human Rights Watch conducted regular human rights and sport research with a particular focus on the abuse of athletes.

Children suffer in the pursuit of sport

The physical, psychological and sexual abuse of children and vulnerable young adults is endemic in sport. Racial and sexual harassment, financial exploitation, neglect and curtailment of freedom of expression are rights violations our young people suffer to be the best and represent their countries. Fortunately, the impact childhood trauma is taking on our athletes and their communities and how athletes perceive their human rights are finally getting research funding, media attention and the government support we desperately need. Much of this is due to the bravery of 900-plus young athletes, mostly gymnasts, who came forward with stories of sexual abuse by an American Olympic team doctor. These athletes did what administrators at USA Gymnastics, the US Olympic & Paralympic Committee (USOPC) and Michigan State University failed to do.

The athletes’ survival stories are now in movies and courtrooms, and those of male soccer players in England together with other brave athletes have created a cascade of athlete activism that coincided with US and global activism about Black Lives Matter. It also revealed that sport shared a central theme with most human rights violations – the abuse of unchecked power.

The US Congress took unprecedented action to take power back from the United States Olympic and Paralympic Committee (USOPC) and this was the sea change we needed. In Canada, it took the appalling use of membership fees collected from grassroots ice hockey kids by Hockey Canada to secretly pay off sex abuse victims for the Canadian federal government to launch wide-scale reform and oversight.

Here in Australia, we have perhaps the most comprehensive model in an independent federal government agency, created in 2020 and called Sport Integrity Australia. Its mandate includes abuse, integrity and safeguarding. In September the International Olympic Committee (IOC) finally adopted a human rights framework.

We need this outside intervention to continue. Unfortunately, some of the same sport administrators who were either bystanders to or perpetrators of abuse are reinventing themselves to stay in sport and hold on to their unchecked power due to our apathetic system of bad or non-governance.

Sport must keep creating new networks with child safeguarding experts, human rights lawyers, law enforcement, and political leaders who aren’t simply interested in maintaining their power, but want to see the realisation of a world of sport that fully embraces human rights.

Nikki Dryden is a two-time Olympic swimmer. She is an Associate at the Australian Human Rights Institute and a board member of the Centre for Sport and Human Rights.