Whether it be as a para-athlete or pursuing an education, recent World Cup winner Jamieson Leeson faces the same balancing act as any other elite athlete at UNSW. 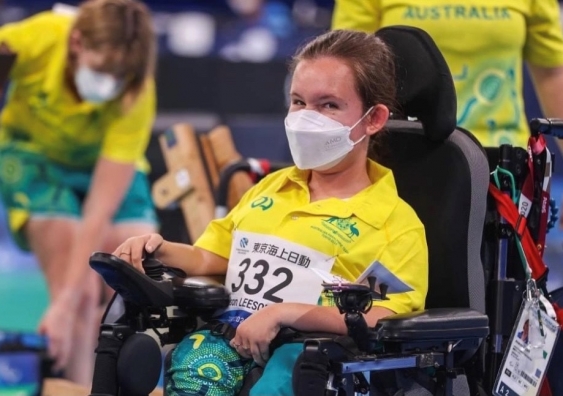 Jamieson Leeson on the boccia floor in Tokyo at her first Paralympics, 2021.

Spinal muscular atrophy – a genetic condition affecting the nervous system – has restricted Boccia Paralympian Jamieson Leeson to a wheelchair since birth but that has not stopped a drive to learn and excel.

This week Leeson has been awarded a prestigious AIS Athlete Education Scholarship, supported by the John and Myriam Wylie Foundation. Leeson is one of 41 athletes from 19 tertiary institutions to have been selected for the scholarship in 2022 - along with fellow UNSW Elite Athlete Program member Henry Hutchison.

The 19-year-old’s first year as an economics student has been busy, to say the least, with the Boccia World Cup making a long-awaited return for the first time in three years.

With exams on the horizon, Leeson headed to Rio in May and won her first gold medal at that level in the pairs competition with Australian teammate Daniel Michel. 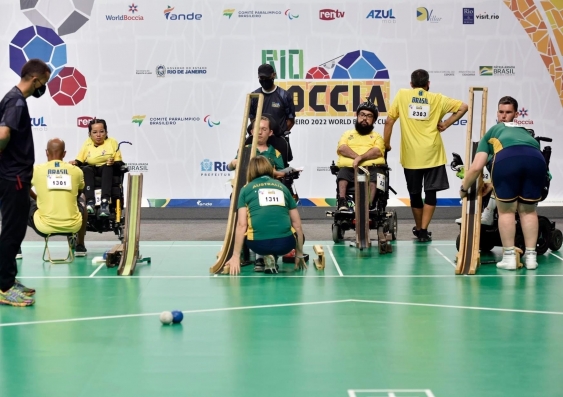 As a member of UNSW's Elite Athlete Program, Leeson faces the common dilemma of rescheduling exams when there’s a clash. She trains six or seven hours a day, three days per week and finds time to study on top of those commitments.

“The change from school to uni hasn't been too bad … luckily, I did a lot of my schooling online anyway, so I've pretty much learnt to teach myself, so it's been an easy journey into university (in that sense).

“Boccia has definitely helped with my time management skills and my focus.”

Leeson grew up in Dunedoo, central western NSW, and was one of just 10 graduates at the K-12 Dunedoo Central School last year, among the town’s just under 800 population.

She juggled her HSC with a rescheduled Tokyo Paralympic Games last year, her first at 18 years of age and an incredible thrill. 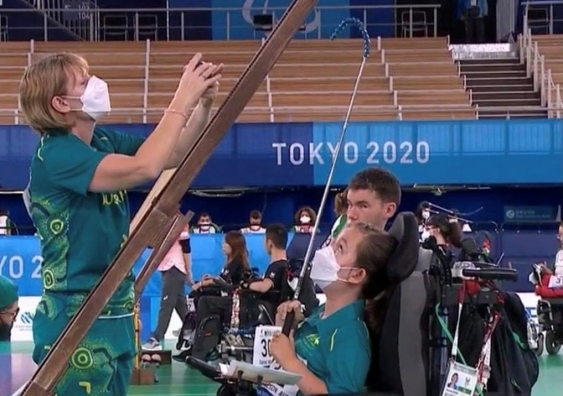 Leeson's Mum has been such a big part of her boccia journey thus far as ramp operator for Jamieson in competition.

“Doing my HSC during Tokyo Paralympics was crazy,” said Leeson, who must type her exams due to her condition.

“Luckily, because of COVID the exams were postponed, by three or four weeks, so I had two weeks of hotel quarantine where I had plenty of time to study.”

“I was able to type because I wouldn't have been able to write for that long… coming to UNSW, they've also been really helpful and supportive (with that).”

In tandem, study and boccia – which is a target sport much like lawn bowls – are an ideal complement for a young woman hungry to learn.

“I've always been one to want to learn constantly and that is part of what motivates me with Boccia because I am constantly learning about the sport,” Leeson said.

“Wanting to be able to constantly learn, develop my knowledge from school and having a passion for economics really motivated me to choose that subject… I’m very analytical.”

Boccia covers a range of disabilities divided into four classifications, three of which the athlete throws from their wheelchair and the other aided by a ramp for those who cannot throw the ball far enough.

“You have a white ball, and you have coloured balls,” Leeson explained. “Red balls and blue balls - you're one colour and your opposition are another - (with the goal) to get your balls as close as possible to the white.”

Leeson's mum has been her ramp assistant for most of her career and the two have travelled to and from her hometown of Dunedoo to Sydney for boccia since the age of 15.

“In 2018, my school went to a schools’ knockout in Orange, and they invited me to go,” Leeson said. “So, I went to that and was scouted there.

“(Then) they invited me down to Sydney, which was a lot of travelling because once I started, and it kind of hasn't stopped, down there every second week.”

While the planned move to Sydney has been delayed, Leeson can’t wait to get on campus and enjoy student life before preparations begin for World Championships back in Brazil.

“I'll get there eventually,” Leeson said. “It just got it announced that there's another World Cup in Bahrain in November, so it's going to get pretty crazy again, that last two months of the year, but it'll be good.”

It is with this positive attitude that Leeson approaches all the challenges in sport, study and life and which has driven her success so far.