Governments and taxpayers asked universities to generate their own funds – and they did – but now the music has stopped. 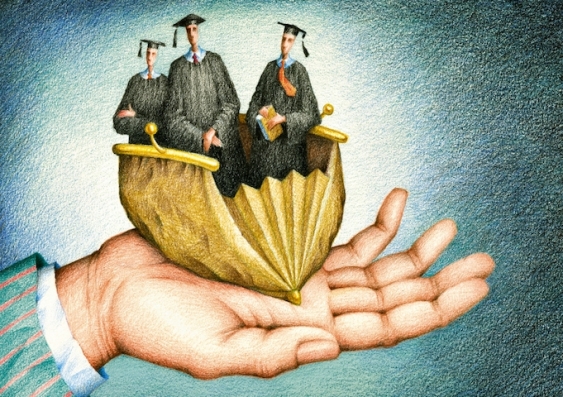 A friend of mine just told me that “universities have lost their way, today they only talk about money”.

As the impacts of the coronavirus are felt and thousands of jobs are threatened, the message is re-iterated in another way – “universities, greedy for revenues from foreign students, have unwisely exposed themselves to risk, now they are getting what they deserve”.

I recall even when at UNSW we were introducing a new and more flexible academic calendar for our students, one student said to me “this is just a trick designed to make the owners of the university even richer”.

But the university doesn’t have any ‘owners’. We are a not-for-profit institution, a registered charity, a public institution that serves the community.

The revenues we raise are invested back into our operations (teaching and research) or put into infrastructure (buildings and IT systems). Profits do not go to shareholders, nor do they go to buying private jets for the directors. Universities are not “all about money”, but we need money to provide world-class teaching and research.

In the 1990s more than 80 per cent of university funding came directly from the Commonwealth, but in recent years base funding has moved to around 30 per cent. Universities were asked to generate their own revenues in the international marketplace and they did.

How did it come to this? As the education industry – and yes, it is now seen as Australia’s third-largest export industry – has grown in size and become more competitive, research prowess quickly emerged as the differentiator.

Once upon a time, universities were like local hospitals – they served the local population and looked after the health of the mind.

Each country had hospitals in the larger towns. There was no real competition or league tables between hospitals because if you had a broken arm, it didn’t really make sense to seek out the top hospital in the world. If you had a very unusual or intractable disease you might travel to a hospital that specialised in that ailment, but in general your local hospital was fine – as long as it was of functional world standard.

Things worked so well that more and more students went to university. Governments helped fund this but ultimately the costs grew and grew, and governments and taxpayers suggested that universities generate their own funding. Philanthropy and industry made important contributions but seldom provided a steady flow of reliable funding. Instead, Australian universities offered education to international students, who paid fees for what was on offer. In the 1990s more than 80 per cent of university funding came directly from the Commonwealth, but in recent years base funding has moved to around 30 per cent. Universities were asked to generate their own revenues in the international marketplace and they did.

The Cutler Review in 2007 recommended that Australia follow what was done in other countries and fund the 'full costs of research' – the labs as well as the projects. The government agreed, but subsequent governments wound back the support ...

Research became the distinguishing factor. Research can be measured and suddenly every university wanted to be like Harvard. Universities used international student fees to support their research and build institutional prestige. International students chose universities with more prestige. An upward spiral. And Australia built a first-rate university sector that allowed us to compete in the Asian century.

As things evolved Australian universities repeatedly pointed out that it was risky to rely on international student fees to fund the costs of research. It was noted that the government-funded research projects, via grants, but universities carried the infrastructure costs, which were about the same in dollar terms.

So, the Cutler Review in 2007 recommended that Australia follow what was done in other countries and fund the “full costs of research” – the labs as well as the projects. The government agreed, but subsequent governments wound back the support to divert funding elsewhere, either to schools, to budget repair or tax relief.

Universities were never “all about money” but were understandably intent on attracting student fees to remain sustainable and internationally reputable. Didn’t everyone want our country to have some universities in the top 100 – Australia is in the top 100 in so many human endeavours and in virtually every sport.

Again and again, universities made the case for sustainable funding for research support and buildings but the first was cut and the building fund, the Higher Education Endowment Fund, became the Education Infrastructure Fund and was used up as the government had other important priorities, like the National Disability Insurance Scheme. This was an important scheme and it was prioritised because by this stage everyone expected that universities could survive and prosper on international student fees – provided nothing went wrong.

Late last year rising international tensions suggested things were going wrong. The strong relationship between Australia and China remained but tensions were growing. Then there was the coronavirus outbreak and suddenly the music stopped.

The answer is to sit down and work on whether Australia wants an internationally competitive university system that delivers in teaching and in research for our people, and does things like training health care workers and developing a vaccine for the coronavirus. If it does, we are going to have to find a way to pay for it.

The article was originally published in The Sydney Morning Herald. Read the original article.