Report from Gonski Institute for Education at UNSW Sydney calculates that Australia could add more than $50 billion to its annual GDP by focusing on students outside major cities. 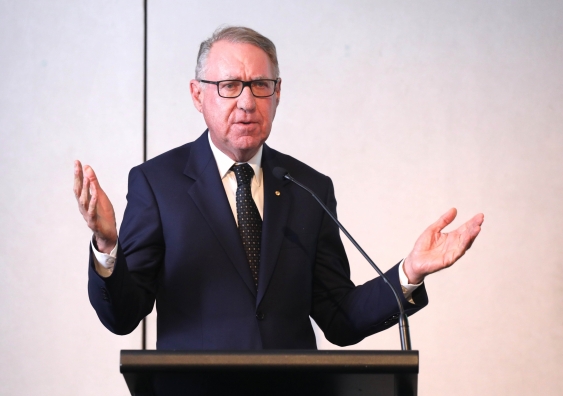 UNSW Chancellor David Gonski at the official launch of the Gonski Institute for Education. Photo by Grant Turner.

The first major report from the Gonski Institute for Education at UNSW Sydney released on Monday calculates that Australia could add more than $50 billion to its annual gross domestic product (GDP) by improving educational outcomes for students living outside major Australian cities.

The Economic Impact of Improving Regional, Rural & Remote Education in Australia – Closing the Human Capital Gap Report shows there is a $56 billion difference in the potential earnings between students living in rural, remote and regional areas and their urban counterparts.

To put the figure in perspective, $56 billion is larger than the contribution of the entire Australian tourism industry and four times the size of the Australian beef industry.

Director of the Gonski Institute for Education, Adrian Piccoli, said it is widely acknowledged that closing the attainment gap is an educational and social imperative and the report further bolsters the argument by quantifying enormous financial gains.

“The typical policy approach to improving economic growth, increasing employment opportunities and improving the standard of living in regional Australia is characterised by major investments from governments into regional infrastructure like roads, rail and hospitals,” said Mr Piccoli.

“These investments are welcome, but the huge economic effect of investment in education is often underestimated and undervalued.”

Professor Holden then mapped the findings into economic outcomes, which resulted in an earnings gap of 3.3% of GDP. Closing one-third of the gap between earnings in rural, remote and regional areas and urban centres would increase Australian GDP by 1.1%, or $18.5 billion. Completely closing the gap represents a $55.5 billion GDP improvement.

“This report highlights the potential benefits to closing the urban and non-urban education gap, while also pointing to the types of interventions that need to be taken to do so,” Professor Holden said. “These are only the direct effects, on wages, of closing the human capital gap. There are important spill-overs in addition to this, such as improvements in physical and mental health and enrichment of communities.”

Professor Holden said the report’s findings are conservative as there is also a multiplier effect throughout the economy from increased productivity and wages.

The report marks the first analysis from the Gonski Institute for Education, which was officially launched during an event on Monday. Based at UNSW’s Faculty of Arts and Social Sciences, the Institute brings together scholars, policy-makers and practitioners to conduct research that will help improve academic and wellbeing outcomes particularly for disadvantaged students and those who live in rural and remote Australia.

UNSW Chancellor David Gonski, whom the Institute is named after, and Vice-Chancellor Professor Ian Jacobs, formally launched the Gonski Institute for Education in front of an audience that included Peter Garrett, former Minister for School Education, Early Childhood and Youth; Ian Narev, Chair of the Gonski Institute Advisory Board and former Managing Director and Chief Executive Officer of the Commonwealth Bank; Pasi Sahlberg, UNSW Professor of Educational Policy; UNSW leaders and guests from the education sector.

Professor Jacobs said the Institute reflects the new path of collaboration the University is forging through its 2025 Strategy, particularly across the strategic pillars of academic excellence, social engagement and global impact.

“At the heart of the Institute is the belief that a system that is fairer for all, will elevate us all,” Professor Jacobs said.

“The Gonski Institute for Education aims to transform lives. It will strive to bridge the gap in equality of educational opportunity and outcomes for Australian children to create a more equitable system where a child’s chance to lead a productive, wonderful and fulfilling life is not determined by wealth, by power, by possessions or by family background.”

Mr Gonski, whose name is synonymous with educational research and reform in Australia, said all students must be supported to fullfil their educational potential.

“Let’s make sure that educational disadvantage is dealt with superbly and indeed leads those bright kids to make their way in a very bright world,” said Mr Gonski.

Gonski review steers away from the damage of NAPLAN