Opinion Israel and the Palestinians celebrate a ceasefire — but will anything change?

There seems to be no interest in reviving a peace process that has been effectively moribund since the Clinton administration in the late 1990s. 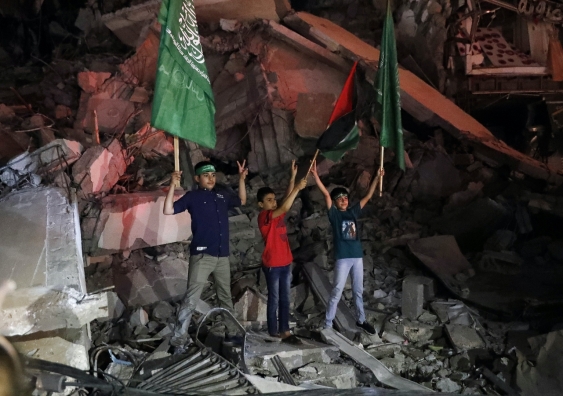 While details are sketchy, Israel and Hamas have agreed to a ceasefire. That is good news for everyone involved. The dying can hopefully end and further destruction be avoided – at least for now.

Both sides can also claim victory. Hamas can claim to have defended the interests of Palestinians in Jerusalem in contrast to its rivals in the Palestinian Authority, while Israel’s embattled prime minister, Benjamin Netanyahu, can claim significant military and political achievements.

But that is about as far as the good news goes. As the smoke clears, the vast devastation of Gaza becomes apparent and the slow and frustrating process of rebuilding must resume.

The economy of Gaza has long suffered under an Israeli blockade and has been struggling to rebuild after the last war between the two sides in 2014.

The devastation caused by the current Israeli air attacks has added massively to Gaza’s infrastructure problems and vast amounts of foreign aid will be necessary over the coming years. It is not clear who will provide the funding. The Gulf states, especially Qatar, can be expected to provide considerable assistance, but aid from the European Union and elsewhere is more problematic.

Equally as important, there seems to be no interest in reviving a peace process that has been effectively moribund since the Clinton administration in the US in the late 1990s.

The fighting does not seem to have inspired any desire on the part of the Israelis or their steadfast allies in the US to break the stalemate and pursue a solution to this long-standing problem.

The Biden administration has continued the approach of its predecessors in working to monopolise and control any attempt to promote a settlement of the dispute. Its goal is to prevent other actors, including the UN Security Council, where Russia and China have a voice, from playing a part in helping Israelis and Palestinians to establish a basis for cohabitation.

Read more: Biden's plan to revive Iran talks could calm the Middle East – but on Israel he and Trump largely agree

The US still enjoys a significant military, economic and political advantage over Russia and China in the Middle East based on its long engagement with the region, though its standing has been in decline in recent years. And Israel, in particular, is suspicious of the motives of the other states.

As a result, the US remains the only power capable of bringing change to the current stalemate. This makes Biden’s approach both disappointing and puzzling. 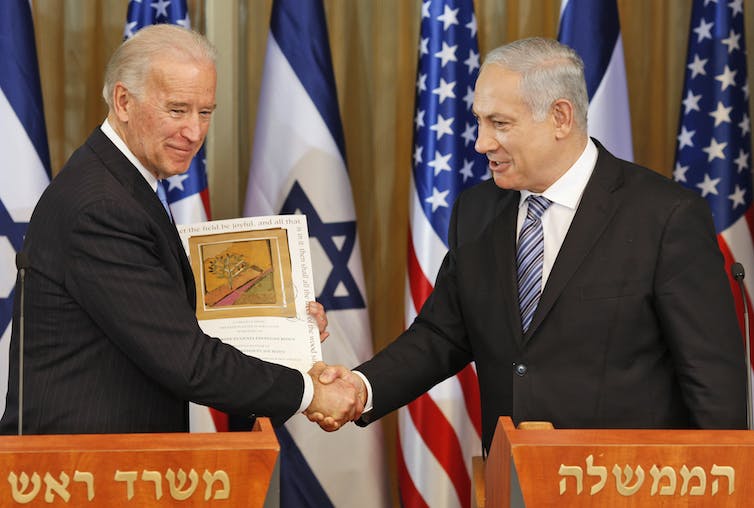 Biden has reiterated his firm support for Israel’s right to defend itself against indiscriminate rocket attacks. Phoyo: Ariel Schalit/AP

Despite Netanyahu’s bravado in publicly defying Biden’s requests for an end to the fighting, the sudden achievement of Israeli objectives in Gaza underscores the continued and significant influence the US has over Israeli governments.

No one is suggesting the US will abandon its solid support for Israel.

But the nature of Biden’s response to the fighting has been effectively to endorse Netanyahu’s approach, which has been to promote the expansion of settlements in the West Bank and refuse to contemplate any solution to the dispute, be it one state or two states.

Biden’s handling of this latest outbreak of violence has effectively seen the US treating Netanyahu’s and Israel’s interests as the same. While the US does not want to interfere directly in Israeli politics, its close identification with Netanyahu does little to encourage hopes for progress.

It should be remembered violence had been roiling the West Bank for weeks – including Jerusalem – before spilling over to Gaza.

The ceasefire seems to ignore that aspect of the current crisis, which could be reignited when the Israeli Supreme Court eventually releases its decision on the eviction of Palestinians from their homes in the Sheikh Jarrah neighbourhood in East Jerusalem.

West Bank Palestinians may be powerless to prevent the evictions and Hamas may be less inclined to intervene again for some time, however, the frustrations and tensions have not gone away and can be expected to boil over again.

While the Americans have designated Hamas a terrorist organisation, it is seen quite differently in Palestine. It comfortably won the last Palestinian elections in 2006 and was expected to win again in the elections scheduled for this month before they were cancelled by the Palestinian president, Mahmoud Abbas.

Read more: Israel-Palestinian violence: why East Jerusalem has become a flashpoint in a decades-old conflict

Hamas had just conducted internal elections in preparation for the national vote and, despite the pain and suffering of this latest conflict, it has reinforced the organisation’s image among Palestinians as the one group that understands their concerns and is ready to defend their interests.

Hamas’s strength extends to the West Bank and to Israeli Palestinians. It reflects the great desire for change among young Palestinians and their frustrations with the leadership of Abbas and his party, Fatah.

One of the consequences of the ill-fated Oslo Accords was the Palestine Authority pledged to maintain security in the areas it controlled, which is currently limited to parts of the West Bank.

As a result, the authority is seen by many Palestinians as working for Israeli interests rather than the concerns of Palestinians. It is also seen as deeply corrupt.

A ceasefire … but for how long?

The unrest inside Israel over the past week highlights how Israeli Palestinians are equally frustrated with their status, a concern that has grown with Netanyahu’s promotion of the Jewish nature of Israel — as they see it, at their expense.

The shock to Jewish Israelis of the widespread violence between the two communities in many Israeli cities, as well as the violence in the occupied territories, highlights the need for a serious commitment by all parties to come together to seek a solution to the relationship between Palestinians and Jews.

Such a prospect remains possible, albeit quite dim at this point. When then-Prime Minister Yitzhak Rabin and Yasser Arafat, chairman of the Palestine Liberation Organization, began working toward a peace deal in the 1990s, they inspired dramatic changes in attitudes among Israelis and Palestinians. Suddenly, peaceful coexistence seemed possible.

Circumstances have, of course, changed dramatically since then, but that is no reason to abandon hope and do nothing.

Like previous ceasefires between Israel and Hamas, however, this one will hold as long as it suits both parties. And there is nothing to suggest the agreement contains any more substantial elements which might lead to a settlement of their long-term conflict.

The 2014 ceasefire lasted seven years but during that time, nothing was done to build on it. We can expect a similar lack of action this time and without such action, it is only a matter of time before violence breaks out again.

Read more: As the Palestinian minority takes to the streets, Israel is having its own Black Lives Matter moment