Prominent arts administrator and philanthropist John Kaldor has been recognised in the Queen’s birthday honours and awarded UNSW’s highest accolade for his eminent service to the community. 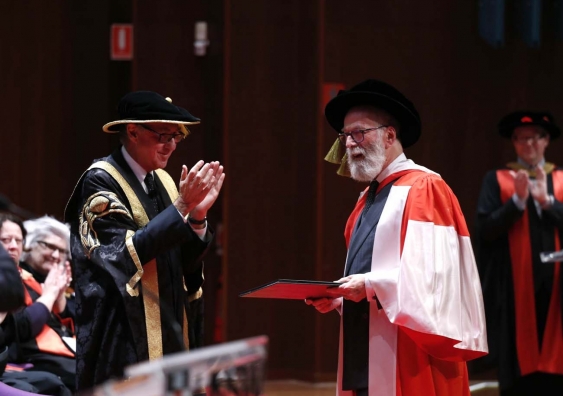 Prominent arts administrator and philanthropist John Kaldor has been recognised in the Queen’s birthday honours and awarded UNSW’s highest accolade for his "eminent service to the community".

A once stateless refugee, Kaldor established himself as a renowned businessman, entrepreneur, collector, arts administrator and designer. He is also one of Australia’s most significant patrons of international contemporary art.

On receiving his honorary doctorate Kaldor took the opportunity to reflect on his family's arrival in Australia as refugees.

“As a family, we survived the horrors of the Second World War, three years later when the Communists took over Hungary, we had no choice but to escape… we became stateless refugees. My parents applied to several countries to make a new life away from Europe, four months later Australia was the first country to give us permits to immigrate,” he told the graduation audience.

Sharing some lessons from his long and successful career, Kaldor said, “My strongest suggestion to you is to find mentors throughout your life; people who can keep you focussed, point the way to new directions and, above all, inspire you.”

Kaldor is well known as a pioneer of public art in Sydney. For his first project, in 1969, he convinced Sydney’s Prince Henry Hospital management to allow New York artists Christo and Jeanne-Claude to wrap the Little Bay coast cliff face with 90,000 square metres of fabric tied with 58 kilometres of ropes. The two month show, Wrapped Coast, Little Bay, attracted phenomenal crowds and was one of Sydney’s earliest outdoor public art events.

Demonstrating a life-long commitment to the community through his involvement on numerous arts boards in Australia and internationally, Kaldor  has worked as Chairman of the Museum of Contemporary Art; as a former Board member of the Sydney Biennale and a former Trustee of the Art Gallery of NSW and as a member of London Tate’s International Committee and the Museum of Modern Art in New York’s International Council.

In 1993 Kaldor’s contribution to the development of contemporary art was acknowledged with his appointment as a Member of the Order of Australia and he was this month recognised as an Officer of the Order of Australia in the Queen’s Birthday Honours list for his distinguished service to contemporary visual art, public art projects, the development of education programs for children, and his philanthropic contributions to cultural institutions.

In closing Mr Kaldor had a few final words for the assembled graduates.

“Ambition and success are great drivers, but success is fleeting. What is lasting, is family and friends and your contribution to society. In the end, this will be your legacy, as it will be mine.”