An unlikely coalition of 17 prominent leaders, chaired by UNSW, has presented the federal government with a blueprint to drive a national transition to clean energy. 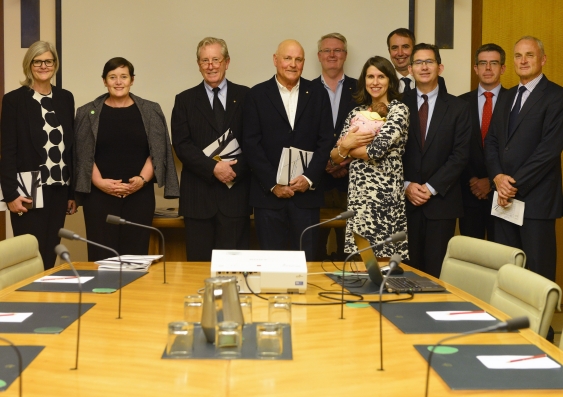 Some of the members of the Energy Transition Leadership Forum who travelled to Canberra to deliver their blueprint. Photo: Ricky Lloyd

An eight-point action plan to transition Australia to clean energy has been unveiled at Parliament House in Canberra and delivered to the Federal Minister for the Environment and Energy, Josh Frydenberg.

The blueprint was drafted over recent months by the Energy Transition Leadership Forum, chaired by UNSW President and Vice-Chancellor Professor Ian Jacobs and made up of 17 leaders from key sectors. “A planned transition to clean energy will bring healthier lives and economic certainty,” the blueprint states. “It will unleash billions in investment and create jobs. Without leadership, the transition will still happen, but it will be chaotic and unfair, with jobs lost and energy disrupted.”

Late last year, inspired by UNSW’s Grand Challenge on Climate Change, the President of the Australian Conservation Foundation, Geoff Cousins, and Professor Jacobs assembled the unusual coalition of CEOs of energy companies, scientists, academics, economists, bankers, lawyers, conservationists, a broadcaster and a former Governor-General of Australia – all concerned at the absence of a national transition plan to shift Australia from carbon-generating fuels to clean, secure and affordable forms of energy.

The non-partisan group has called on the government to drive a coordinated transition to clean energy by 2050, or sooner, to limit global warming and meet Australia’s international obligations under the Paris Agreement. It notes Australia’s coal-fired stations are among the world’s most polluting and least efficient, with many well past their use-by dates.

The Leadership Forum calls for a national plan to establish rules, policies, regulations, markets and a basis for investment to power the transition. The outcome, it says, must be founded on a just transition for workers and communities.

“Transitioning to clean energy will be a complex process that needs to involve all key parties,” Professor Jacobs said. “Climate change is one of the biggest challenges facing humanity and I believe the Forum blueprint provides an opportunity to make a difference and to move Australia forward to becoming carbon neutral as quickly as possible.”

ACF President Geoff Cousins noted Australia had never had a proper transition blueprint for any industry in its history, not even the automobile industry. “When you operate in that way, people lose their jobs, there isn’t any plan for them to get new jobs, and the economy doesn’t function as well. The blueprint we’re looking at here is not just a plan that looks at climate change issues or technology issues, it also looks at employment and investment, and how to get the ‘first mover’ advantage in leading the world so that the good new jobs in the clean energy sector come to Australia instead of somewhere else.”

In an introductory essay to the Forum blueprint, Pulitzer Prize-winning author Geraldine Brooks observes humanity is facing its greatest threat, and its greatest opportunity: “This is not a matter of ‘we should do this’ or ‘we’d be wise to.’ It’s simpler. We must. And we can.” The energy challenge facing Australia, she writes, is clear: “Change will come. Australia’s choice is to embrace the transition and the economic opportunities it brings. To plan for inevitable changes to our energy sectors and economy and make sure the transition is fair for all.  Or we can resist and delay and deal with consequences of an unmanaged and chaotic transition that harms our communities and our economy and fails to rapidly lower our climate pollution. This transition won’t always be easy, but by accepting necessity and acting with speed and clarity, we can buffer any negative impact and protect vulnerable businesses and populations.”

Professor Jacobs said UNSW was itself investing heavily in climate change research and in developing a range of renewable energy resources. “We are at the global forefront of developing clean technologies, as evidenced by our leadership in photovoltaic cell research. We are also exploring options to rapidly increase our solar energy footprint on campus. And central to our social engagement, a key platform of our 2025 Strategy, is the UNSW Climate Change Grand Challenge which is already generating rigorous debate and innovative thinking. Our willingness to chair the Energy Transition Leadership Forum reflects my view that the university, as a servant of society, should be a major centre for thought leadership where views can be freely expressed.”

The blueprint accepts the transition will face obstacles. “Sadly, in recent times, despite the support clean energy enjoys with the Australian community, clean energy has become a political football with fierce debate based on ideologies not evidence. This is not in the best interests of the Australian people, business or economy. Our bright, safe and secure future relies on a planned and fair transition to clean energy. The longer we take to accept this reality, the greater the disruption of Australian communities, workers and business.”

“This is not a decision for future generations. Before a child born today even finishes high school, our energy systems will be vastly different. Change is happening now. Our only choice is how we manage this change. We can make our future fair or disruptive, predictable or chaotic. This is the choice we make today,” the blueprint states.

The Leadership Forum on Energy Transition comprises the following leaders:

What's so super about superfoods?