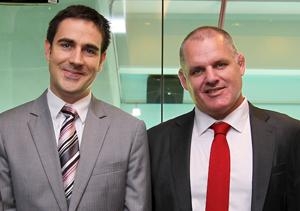 Coincidentally, both are graduates of the Faculty of Built Environment. They remembered their university days fondly as they mingled with friends, professors and other Hall of Fame members at a ceremony at the Sydney Cricket Ground on Friday.

Ewen McKenzie played 51 times in the position of front row prop for the Wallabies, but he admits one of the hardest things he ever did was to hit the books after a game as he studied for his honours degree in Town Planning.

“I was actually studying for exams in 1988 when I got the call that I’d been selected for the Wallabies. We had a few drinks celebrating that night, but I kept the studies going. I was doing my thesis in 1991 and took uni books with me to England for the World Cup. I even studied during the week leading up to the final.”

The Wallabies won that match, and Ewen doesn’t recall doing much study that night. Despite his sporting success he was determined to finish his degree. “It was still an amateur game then. We were all studying or had jobs. I wanted a career in town planning after rugby and didn’t think I’d end up coaching. I worked in local government and waste management for a while.”

He grabbed the chance to coach rugby and last year brought the Queensland Reds from bottom of the table to Super Rugby Champions. He’s now being looked at as the next coach of the Wallabies.

“There’s no doubt what I learned at UNSW studying town planning helped me coach a rugby team. It’s all about managing people, a philosophy of discipline and using your resources in the best way possible.”

Ewen urged students who might be successful in sport or other pursuits to finish their degrees. “It’s about fulfillment in life. You won’t be playing sport forever and you need a working career to give yourself the best opportunity to be happy in life.”

Patrick Dwyer was one of the famous Silver Bullets, the Aussies who won silver in the 4x400 relay at the 2004 Athens Olympics. The same year he graduated from UNSW with a Bachelors degree in Building Construction Management.

“I had a UNSW Ben Lexcen Sport Scholarship and that was an enormous help to me while I was studying. To be an Olympic athlete you have to have extreme discipline. I hit the books while other athletes played Playstation. It took me eight years to do a four year degree because of my athletic commitments, but it was worth it. I urge anyone who has the opportunity to finish their degree. It will be with you for life.”

Patrick donated his Olympic running top to the UNSW Hall of Fame gallery and Ewen a signed Queensland Rugby Jersey. The lunch raised money for the Ben Lexcen Sport Scholarship program, the top level sporting scholarship at UNSW.  UNSW Sport and Recreation hopes to raise $500,000 over the next 5 years to double the value of the scholarship from $5000 to $10,000 a year.

The UNSW Sport Hall of Fame was created in 2003 to honour those UNSW alumni who have performed at the highest level of international sport. It now has 20 members.