The election of Joe Biden raised hopes of a new dawn in US environmental protections. But left-right views will continue to stymie progress, just as they do in Australia. 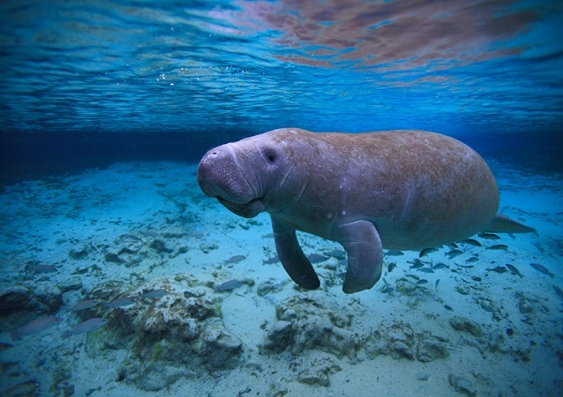 Manatees are large marine mammals and are similar to dugongs found in Australia. Photo: Shutterstock

Days after US rioters stormed Capitol Hill in January, a manatee was found in a Florida river with the word “TRUMP” scraped into its back. The aftermath of the disturbing incident revealed a pervasive left-right divide that has long plagued environmental debate.

The election of the Biden administration raised hopes of a new dawn in environmental protections. Our research, however, suggests entrenched left-right views will continue to stymie effective environmental action in the United States – just as they do in Australia.

That’s because focusing on localised protections or individual rights leaves intact a cultural blind spot that conceals systemic issues threatening nature. Tackling these issues requires confronting environmental damage to which we all contribute. 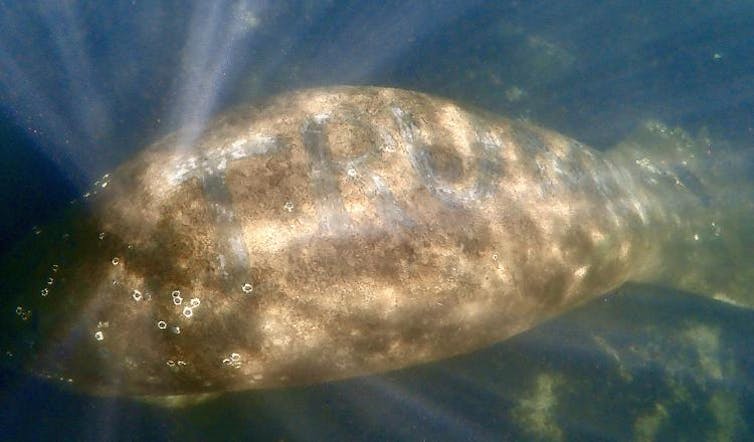 The debate surrounding a manatee with ‘TRUMP’ scraped into its back reveals a blind spot in our thinking about environmental issues. Photo: Citrus County Chronicle

The Florida manatee is a large marine mammal, and one of the original species listed as endangered under the 1966 US Endangered Species Act. The animals are similar to dugongs found in Australia.

The January 11 manatee incident was quickly co-opted into the US political debate. Some on the left accused Trump supporters of inflicting the damage. Right-wing observers downplayed the seriousness of the incident and suggested claims of abuse were manufactured by the left out of hatred for Trump.

Others framed the incident as typical of stereotypes of Florida as home to reactionary politics and “trashy” culture.

It may be tempting to dismiss the incident as unique to the Trump era or Florida itself. But doing so risks ignoring important lessons. Our research shows how framing such events as political left-right issues prevents us from recognising the deeper causes of environmental crises.

Read more: Dugongs: looking to the gentle sea creature's past may guard its future 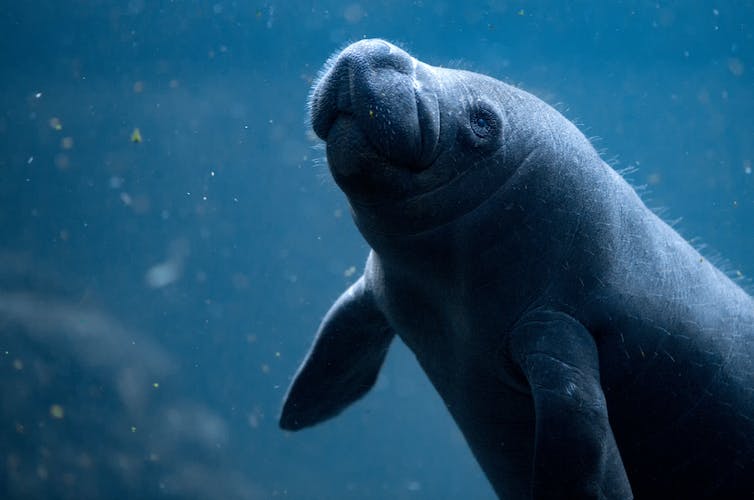 Manatees are listed as threatened under US law. Photo: Shutterstock

Media and politicians in the US and elsewhere often characterise the environmental threat as one posed by individuals. But in most cases, including manatees, threats extend far beyond a single bad act.

Before colonisation, wetlands accounted for up to two-thirds of Florida’s land mass. But rampant coastal development over the past 150 years destroyed more than 60% of these wetlands – dismantling habitat and preventing manatees from reaching warm springs needed to survive winter. Also, human climate disruption has led to frequent severe “red tide” algal blooms, which poison manatees.

But these broader threats to manatee survival are largely ignored by news media, environmental actors and even protection laws. Instead, the left tends to focus on individual threats, and the right on individual human or economic rights.

For example, in response to January’s incident, local news outlets published calls by environmental advocates to ban human contact with manatees. This approach echoes existing state and federal laws that prohibit people from harassing, hurting or killing manatees, but fail to protect the ecosystems manatees rely upon to survive. 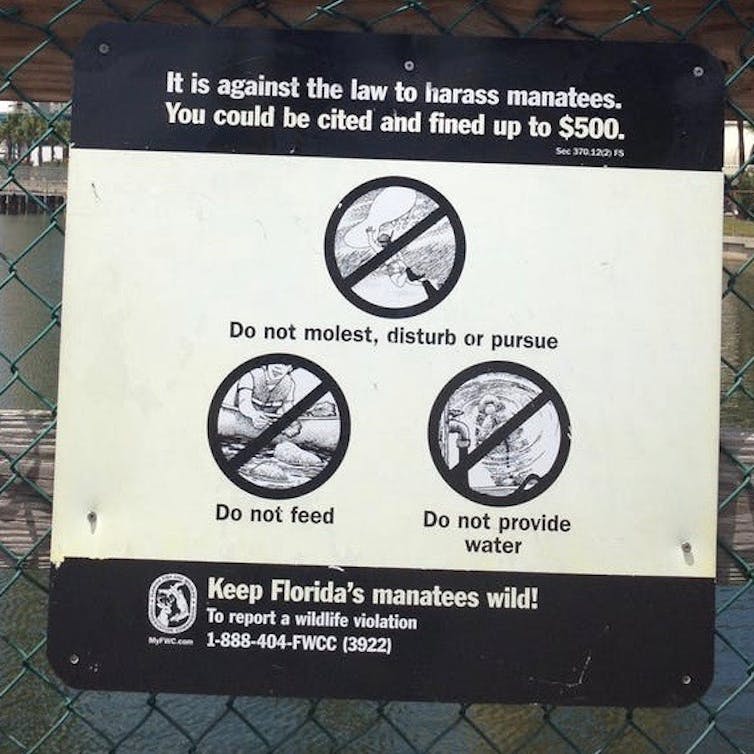 Still, such manatee protection efforts meet backlash from the right. For example, in 2017, right-wing lobbyists successfully pressured the US government to downgrade the status of manatees from “endangered” to “threatened”, thus weakening manatee protections. The move was motivated by a desire to protect individual property and economic rights – in this case, development in Florida’s wetlands.

Clearly, manatees – and other vulnerable species – are threatened by the tireless expansion of human impact on every aspect of the ecosystems they need to survive. This includes our transport systems, housing, energy generation and over-consumption.

But debate and action on such issues tends to ignore the interconnected threats. For example, as coastal development in Florida destroyed warm-water springs, manatees have become reliant on warm waste water flowing from nearby power plants. Conservationists successfully sued to have manatee sanctuaries created around these artificial discharges, despite the broader damage the industries wreak on the planet.

Similar framing is seen in Australia where, for example, battles over protected marine zones largely revolve around how much commercial fishing is allowed. This obscures other systemic threats to oceans that threaten not just fish numbers, but the oceans’ abilities to support all life – including climate disruption, agricultural runoff, water pollution, and overfishing.

Environmental well-being requires reconsidering how our societies function. Instead, debate is often fixated on less central issues, such as how well or poorly our environmental efforts compare internationally.

Read more: Biden has pledged to advance environmental justice – here's how the EPA can start 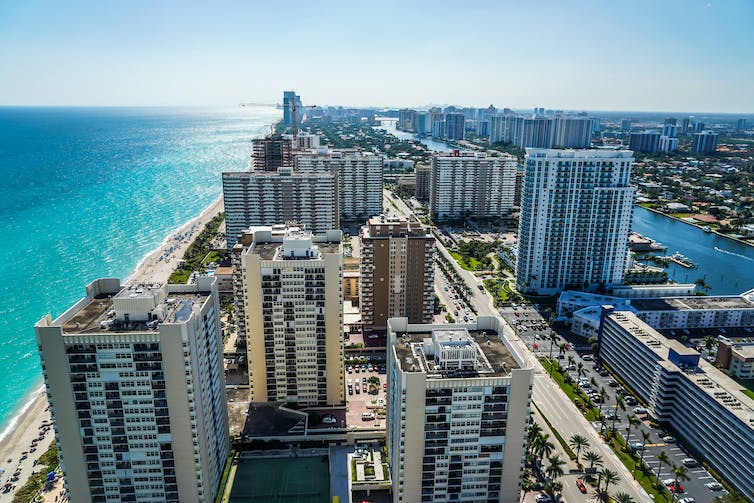 Broader issues, such as development on the Florida coast, is threatening manatees. Photo: Shutterstock

As COVID-19 has shown, humans and our systems are inseparable from nature. But global left-right environmental debate largely ignores this.

Instead, there’s a widely held belief humans are separate from, and even superior to, nature. This “human exceptionalism” can be traced back to Enlightenment thought and Judeo-Christian tradition that privilege humans above other species, and the planet as a whole.

As a result of this blind spot, personal economic opportunity is often seen as more important than ecological balance. And those who seek to protect nature often mobilise to protect specific areas or species from a narrow threat. This is compounded by an absence of institutional systems to address intertwined issues threatening large ecosystems.

Looking past the false separation of humans from nature is necessary, but confronting. It means seeing, questioning, and addressing the systems many of us – both on the left and right – take as a given.