Matilda McDonell is a rising star of the Super Netball competition and studying law, a feat inspiring another UNSW elite athlete to do much the same. 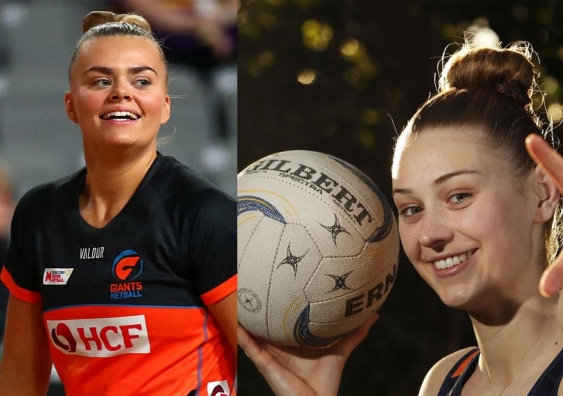 UNSW student Olivia Coleman was last week named part of the Giants Netball Academy for 2022, moving from the NSW Swifts to join Australian Under 21 room-mate Matilda McDonell at the GWS setup.

For Coleman, McDonell is someone from whom she draws special inspiration.

“Looking at people like Tilly McDonell, who is doing a law degree and is playing Super Netball, she’s definitely someone I strive to be like,” said Coleman, who has just begun her Juris Doctor of Law following an undergraduate degree in Criminology and Criminal Justice.

McDonell, 21, is studying a Law and Psychological Science degree at UNSW, is a full-time member of the Giants squad, identified as a future Australian Diamond and awarded UNSW’s 2021 Female Athlete of the Year.

“I was with her in the Australian Under 21s squad this year and I was lucky enough to room with her, actually. We were talking about our degrees at UNSW and balancing it with sport and everything.

“She’s definitely a role model when it comes to being able to do both.”

Preseason has just begun for both women. McDonell has just completed her first block of training – a period of running, jumping, endurance work and weights, all while completing her exams.

“I just finished up my exams last week, which was a struggle to get them done, to say the least,” McDonell said.

“I talk to a lot of athletes, and they say their athletic performance is really complemented by academic commitments.

“It’s like a break away from the netball in many respects. Training, for me, I find it physically and mentally demanding [but] the study is a different type of mental work.

“I switch off and put my thoughts and energy into something else,” she said. “It’s definitely difficult, but nothing good ever comes easy.”

In August, McDonell was one of 19 players selected in an Australian Development squad, and in the same month she experienced her first Super Netball Grand Final, which the Giants narrowly lost to the NSW Swifts by four points.

Coleman balances her studies and netball with a job as a paralegal for People + Culture Strategies in Sydney.

So, it’s fair to say the inspiration is paying off with a netball box still to be ticked.

'I talk to a lot of athletes, and they say their athletic performance is really complemented by academic commitments.'

“The ultimate aim [is to play in] the Suncorp Super Netball competition,” Coleman said.

“I definitely enjoyed my time with the Swifts. I had Giants’ Academy coach, Ali Tucker-Munro, when I was little, and she sparked my interest in netball, and I wanted to be coached by her.”

During two seasons severely impacted by the COVID-19 pandemic which forced netballers into ‘bubbles’, like many other professional athletes were required to do during these unprecedented times, study was especially important for both McDonell and Coleman.

“We were away in the bubble – this year and last year – and we were lucky enough that uni (was) online which took away a lot of the stress and the concern because I’d basically finish training, come back and log in to my lectures or do my readings or what not,” McDonell said.

“It actually worked out really well, particularly in the hub. It can get quite consuming because it’s 24/7 netball, basically.

Coleman joins the Giants after two seasons just outside the top 10 at the Swifts, who she had to watch lift the Suncorp Super Netball trophy from home last season due to COVID-19.

“It was quite tough being home when everyone else was away, playing the sport that I love and I couldn’t do the same, especially this year having four months off was a lot different to the eight weeks last year,” said Coleman.

“When things were closed and we didn’t have much home gym equipment, and the (Swifts) were away in Queensland, uni definitely kept me grounded. If I didn’t have that I would have been a little bit lost.

“It’s been a lot better to be in the gym in person [this preseason] and see the girls in person.”

And both women agree that UNSW’s Elite Athlete Program has helped immensely achieve that balance.

“People like Helen Bryson and the EAP have been really helpful in accommodating everything I’ve needed for University to accommodate my sport,” Coleman said.

“I can’t hold them in higher regard, they helped me with everything, especially Helen.

“She’s done so much for me in terms of being able to sort out my timetabling, getting consent for certain classes and that sort of thing.

“[Helen’s]) definitely been that added support, and without the EAP and UNSW, I definitely wouldn’t be the athlete that I am today.”

“UNSW, and Helen Bryson in particular, have been unreal,” she said.

“If I need an extension or something with games, which I’ve required a lot of this year … they’re just so supportive in that regard, they’re more than happy to help.

“Helen is literally my guardian angel.”

McDonell is a Ben Lexcen Scholar and is mid-way through her Law and Psychological Science degree, while Coleman was an Elite Athlete throughout her Criminology degree and hopes to complete her qualifications in 2024.