Leading building and construction companies have joined with university experts in a major new initiative to help Australia achieve its emissions reduction target. 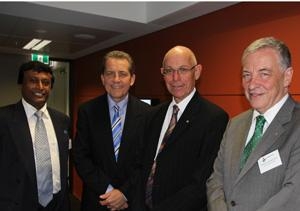 Some of the country’s leading building and construction companies have joined with university experts in a major new initiative to help Australia achieve its 2050 greenhouse gas emissions reduction target.

The Cooperative Research Centre (CRC) for Low Carbon Living, headquartered at the University of New South Wales (UNSW), was officially opened today by the Minister for Tertiary Education, Skills, Science and Research, Senator Chris Evans. The Federal Government has granted $28 million towards the establishment of the $100 million CRC, with the balance coming from the Centre’s partners.

Located within UNSW’s new Tyree Energy Technologies Building, the CRC aims to help cut Australia’s residential and commercial carbon emissions by an extra 10 mega tonnes per year by 2020, which is the environmental equivalent of taking 2.3 million cars off the road annually. The CRC plans to do that by developing low carbon building construction materials and increasing the evidence base for government policy and planning, among other measures. Australia has set greenhouse gas emissions reduction targets of 25 per cent by 2020 and 80 per cent by 2050 compared with 2000 levels.

When the carbon reduction targets are met, the CRC will have delivered a direct benefit of $250 million per year to the economy, while reducing risk to the $150 billion per year construction industry, as it adjusts to a carbon-constrained economy.

“The construction industry is an important contributor to the national economy but it’s also a big contributor to Australia’s carbon emissions,” Senator Evans said at the UNSW launch.

“This CRC brings together researchers with expertise in property, planning and government to help the industry cut emissions in new construction materials and processes, while maintaining its competitiveness.”

Comprising a national consortium of 45 participants, the new CRC includes universities, government and some of the biggest players in the construction and building industries.

Research shows a quarter of Australia’s total emissions reduction potential can be achieved – with minimal cost – from energy efficiency measures related to building design, construction and use.

“Many people do not realise that the biggest opportunity for emissions reductions is in buildings. The built environment is responsible for 40 per cent of energy use and Australia’s homes account for 16.5 per cent of our emissions in electricity use alone, without accounting for energy embodied during the production and disposal of building materials,” said CRC Low Carbon Living CEO and UNSW Professor Deo Prasad.

“The reduced cost of achieving national greenhouse gas emissions targets will cut the cost of Australia’s carbon reduction obligations by around $70 billion by 2040, all without a reduction of living standards.”

To achieve its goals, the CRC will employ a three-pronged approach starting with building design and construction, through to the creation of entire low carbon precincts and changes to individual consumer engagement and behaviour.

“Ultimately, if we are to be successful, communities have to be involved. Designing cities well is one thing but you also need to have communities involved in low carbon living, getting people to accept lower carbon heating, cooling, lighting and transport.”

Professor Prasad said the CRC will also work with regional nations to assist them in finding their own solutions to lowering carbon emissions. “It’s about Australia taking leadership in the region, which is a key element of Australia in the Asian Century White Paper.”

Some of the 15 research projects already underway at the CRC include: