Claire Annesley plans to build on the Faculty’s international reputation continuing to attract students and academics to take on society’s most pressing problems. 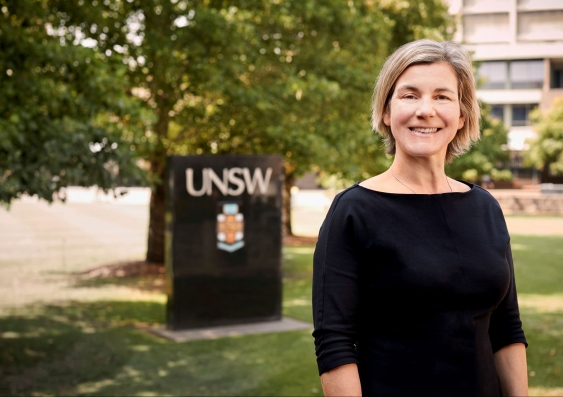 Since her days as an undergraduate student at University of Newcastle upon Tyne, the new Dean of UNSW Arts & Social Sciences, Professor Claire Annesley, has been building a global academic network, with particular strengths in North America, Australia and Europe.

“UNSW and Sydney already feel like home. I don’t feel as though I have moved to the other side of the world. It just feels like I am moving to an amazing institution in another part of our global academic community,” she says.

Professor Annesley has joined UNSW as Dean of Arts & Social Sciences from Sussex University where she was Deputy Pro-Vice Chancellor, Equalities and Diversity. She succeeds Associate Professor David Blaazer, who was interim Dean for the past year, and Professor Susan Dodds who was Dean for three years and is now Deputy Vice-Chancellor and Vice-President (Research and Industry Engagement) at La Trobe.

The new Dean says she wants to build on the Faculty’s successes and on its global reputation so that UNSW Arts & Social Sciences becomes the place for arts and social sciences in Australia and the world.

“I want to attract students and faculty that continue to make Arts & Social Sciences a truly diverse and inclusive place and which continues to deliver groundbreaking teaching and research,” she says.

“What's great about UNSW is the strong commitment within the University – which has considerable strengths in science, technology, engineering and medicine – to supporting Arts & Social Sciences. I want to make sure our Faculty is really well connected across the whole University so that we can continue to shape broader University-wide agendas.”

“The best solutions to the big challenges are going to come from diverse teams who can help us think about problems from all possible angles. You need social scientists, historians, linguists – all humanities scholars – to be able to contribute to solutions that are going to make our society, our culture and our world a better and safer place.”

The new Dean sees arts and social sciences playing an important role in helping translate some of the technological innovations coming out of science, technology, engineering and medical research. She says the humanities help us to think about the human dimension of innovations and how to translate them into progressive public policy.

She wants to ensure that the arts and social sciences are valued across society.

A focus on gender and politics

Professor Annesley says her interest in gender and politics – her area of research expertise – was sparked by two things.

As an exchange student in Germany in the early 1990s, she attended a talk by an Eastern German MP – Regine Hildebrandt – about the impact of German Unification on women. It made a lasting impression on her for a number of reasons.

“I think she was the first female politician I’d heard speak. She was totally inspiring. It was also the first time I became aware of the impact of public policy on gender and on gender relations, and how public policy can cause – as well as try to solve – gender inequality.

“At that point, I became interested in the importance of women’s representation in politics and how public policy is gendered, but also in the gendered consequences of institutional or constitutional change,” she says.

Both Professor Annesley’s undergraduate dissertation and part of her PhD thesis focused on gender and politics. Since 2005, her main research agenda has been how to get more women into politics, what change or difference women in politics can make, how to change public policy for more gender equality, and the consequences of public policy decisions and economic decision-making on gender equality. Her latest book, Cabinet, Ministers, and Gender, is a study of how the written and unwritten rules of cabinet recruitment affect how many women become ministers. It includes seven case study countries, including Australia.

The second trigger for her interest in gender equality was personal. She grew up in a family where, during her teenage years, her mother was out at work and her stepfather was a stay-at-home dad.

“My role models were strong and very unusual at the time, and my family had a deep commitment to social justice,” she says.

She says towards the end of her time as an undergraduate, she realised how much she loved the research part of her degree. She wrote her dissertation on how the impact of German Unification was worse for women than for men.

Her PhD was on the impact of German Unification on industrial relations and trade unions in different regions of eastern and western Germany. As a doctoral student, she worked for a European Union (EU) exchange program between her university (Sheffield) and Łódź University in Poland. During her PhD, she also worked on an EU research project about European citizenship and development of the European social model, which involved 15 university partners at 15 universities across the EU.

After completing her PhD, Professor Annesley secured a position as lecturer in European politics at the University of Manchester, which she describes as “a wonderful university” where she “was able to thrive and develop”. During her 15 years at Manchester, she was promoted to professor and became the Assistant Dean for Research in the Faculty of Humanities and Director of Research in the School of Social Sciences.

Professor Annesley joined the University of Sussex in March 2015 as Head of Politics and was appointed the inaugural Deputy Pro-Vice Chancellor, Equalities and Diversity, in November 2016.

“It was very exciting because it was a new role. There was a lot of opportunity to pull together the work being done at the university around equality and diversity – to create a new strategy, build an equality and diversity team, and develop new policies and initiatives. I am really proud of what we achieved in a short time.”