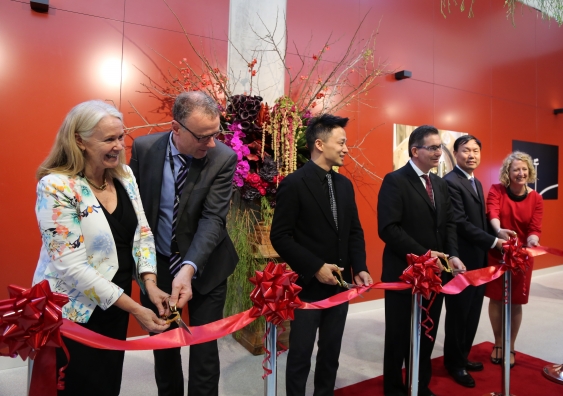 UNSW technology that promises to cut power costs and greenhouse gas emissions by improving electricity transmission will be developed in Australia following the official opening today of the new UNSW and Hangzhou Cable Joint Laboratory.

The $10 million lab on UNSW’s main Kensington campus will develop a prototype of the new graphene-based cable technology that overcomes persistent electricity leakage that plagues conventional power cable and grids, to deliver significant savings in electricity and resulting reductions in costs and emissions. The new technology was invented by a UNSW research team led by materials scientist Professor Sean Li.

The project is the first to be unveiled as part of the new Torch Innovation Precinct at UNSW, officially launched earlier this week. The Torch initiative brings together world-class UNSW-led research teams and Chinese businesses and industries with the capital, capacity and market access needed to translate Australian research into high-impact new products, processes and services.

Modelled on China’s highly successful Torch program that promotes the co-location of businesses, universities and research organisations within dedicated science and technology parks to drive innovation, the Torch precinct at UNSW is the first outside China.

“The impact on the electricity sector, in terms of financial savings and environmental gains, would be profound,” the Director General of China’s Torch program, Zhihong Zhang, said of the potential of the new cables.

The Hangzhou Cable Co. is a listed Chinese company and is publicly committed to expanding its R&D efforts, and to collaborating with international innovators, to achieve greater efficiencies in power transmission. The commercialisation and application of the UNSW technology could save some 275 terrawatt hours of power a year across China alone – more than Australia’s entire annual energy consumption. A 10-metre long prototype cable will be developed in Australia before a planned scale up to industrial trials and application in China.

“By accelerating our research in Sydney and scaling up by using the industrial capacity of China, then going out into the global market – this is a formidable partnership.”

Since 1988, China has developed 150 Torch precincts nationwide that now generate some 7% of GDP, 10% of industrial output and 16% of export value. Deloitte Access Economics has estimated the Torch precinct at UNSW could boost Australian GDP by $1.1 billion in its first decade alone.

An initial $30 million has already been committed by eight Chinese companies to support UNSW-led research in advanced materials, biotechnology, energy, and environmental engineering and a further $20 million worth of contracts for research into cancer drugs, water quality, photovoltaics and further work on advanced materials are expected to be signed in the coming months. The precinct aims to attract over $100 million in new industry research funding over the next five years.