The Gonski Institute for Education (GIE) has been officially named in honour of UNSW Chancellor, David Gonski AC. 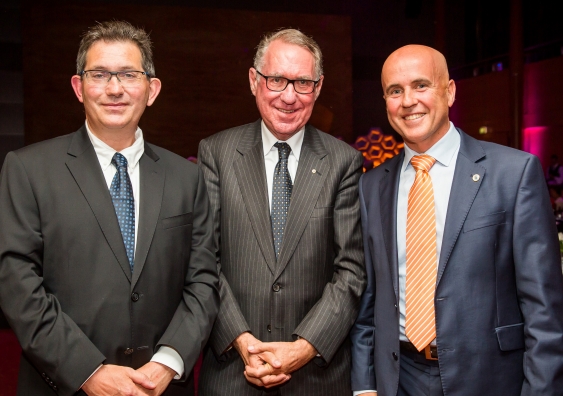 UNSW President and Vice-Chancellor Professor Ian Jacobs made the announcement last night at the University’s annual Town and Gown event.

One of Australia's most prominent business leaders and philanthropists, Mr Gonski has made a huge contribution to education in Australia through his school funding review and in his role as UNSW Chancellor for the past 12 years.

Based in UNSW’s Arts & Social Sciences’ School of Education, the GIE will bring together scholars, policy-makers and practitioners to conduct research that will help improve academic and wellbeing outcomes particularly for disadvantaged students and those who live in rural and remote Australia.

Mr Gonski said that he felt extremely honoured to have the new institute named after him.

Former NSW Education Minister and new director of GIE, Mr Adrian Piccoli, said he was excited the new institute has now been officially named and was looking forward to the contribution it will make to education in NSW.

“Education is one of the most powerful forces in the world – it changes individual lives and it has an enormous impact on society in general,” says Mr Piccoli.

“Improving educational opportunities for students across NSW, especially those living in rural and remote areas, will help to address the educational divide that exists and improve the lives of many people.”

The GIE will have an advisory board, and will attract the best scholars to work with the Institute, including researchers from across all UNSW faculties.

“UNSW is committed to quality and equity and this new institute will drive these objectives across our educational system,” Professor Jacobs says.

“I am particularly proud to see the Institute named after our Chancellor David Gonski. It is a fitting tribute to an individual who has had such an important impact on education in Australia and who believes passionately in the power of education to change and improve lives.”

The Gonski Review Report (2011) identified highly concerning trends in the educational outcomes of Australian school students, including a significant link between low levels of achievement and educational disadvantage, particularly among students from low socioeconomic, regional, remote and Indigenous backgrounds.

Mr Piccoli has been an ardent supporter of the Gonski reforms, saying they are crucial to ensuring all children receive a fair go at school.

In his first public appearance as Director of the GIE, Mr Piccoli will join a panel of education experts on 30 October for the University’s 2017 Says Who? Event, Education & equality: Unfinished business? He will be joined by NSW Shadow Education Minister and Labor Member for Lakemba Jihad Dib, Liliana Mularczyk, OAM, the Director of Secondary Education for the NSW Department of Education, and NSW Chief Scientist Professor Mary O'Kane.

Students are less focused, empathetic and active than before. Technology may be to blame