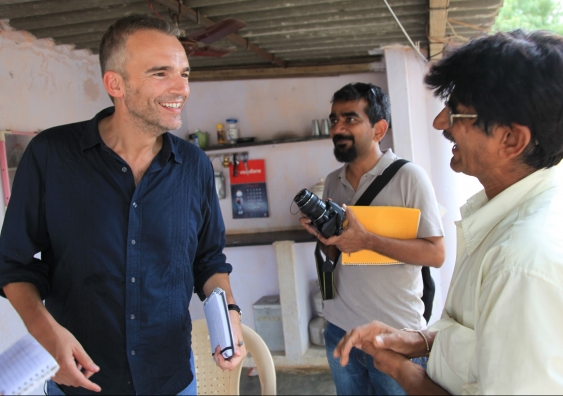 The Chair, the first of its kind in Australia, was established earlier this year with a $10 million endowment from philanthropist and White Rabbit Gallery founder Judith Neilson. It aims to lead research and education to support disadvantaged communities displaced by natural disasters, geo-political conflicts, socioeconomic exclusion and environmental factors.

“Architecture can play a central role in meaningfully engaging in these issues, through social action, critical engagement, building evidence of what works, and above all, prioritising affected people,” says Sanderson, who will lead research and the new specialisation in the Master of Architecture program, Architecture and Social Agency.

Currently based at the Norwegian University of Science and Technology where he specialises in urban disaster resilience and humanitarian aid, Sanderson has 20 years’ experience working with international aid agencies in development and disaster risk reduction.

UNSW was deeply saddened to learn of the  sudden death of Professor Brien Holden, an international giant of vision science.

Holden was CEO of the Brien Holden Vision Institute and CEO of the Vision Cooperative Research Centre and was a professor in the UNSW School of Optometry and Vision Science. Holden was a global leader in research and innovation in his field, described by one US university as “the most influential optometrist of our generation”.

He led the development of new contact lenses and surgical vision technologies, investigated the causes and solutions to blindness and impaired vision from refractive error, and helped to combat the global epidemic of myopia. His pioneering breakthroughs had real world impact and transformed lives. Some 60 million people now wear safer, more breathable ‘soft’ silicone hydrogel contact lenses manufactured using a scientific formula designed by Holden and his colleagues at UNSW more than three decades ago.

An outspoken advocate for government investment in science, innovation and humanitarian aid, his many national and international honours – most recently receiving the American Academy of Optometry’s highest award – attest to his lifetime commitment to the advancement of knowledge.

A habitable timber bridge incorporating a pool and café is just one design showcasing the work of Built Environment students, graduates and alumni in UNSW’s annual Luminocity exhibition, which is open until 2 October at  UNSW’s Red Centre.

Galego designed the habitable bridge  to incorporate the existing footbridge at South West Rocks in NSW.

All hail our robot world champions

UNSW’s triumphant robot soccer team returned home from the RoboCup world soccer championship in China, with the winner’s trophy in their grasp for the second year in a row. The UNSW student team smashed its way to beat the elite German squad by 3–1 in a tense grand final. Topping off the incredible effort was the announcement that Sydney would host  the RoboCup competition in 2019.

RoboCup is an international competition that fosters advances in robotics and artificial intelligence.

A new wave flume facility – essential to model coastal and inland water behaviour – has been opened at UNSW’s Water Research Lab in Manly Vale. “Flumes are essential in fluid dynamics research, allowing engineers to understand coastal and offshore structures, sediment transport and other water transport phenomena,” said Professor Ian Turner, the newly appointed director of the laboratory. The new facility will expand UNSW’s coastal research programs, which are seeking to improve fundamental understanding of the forces that are shaping coastlines now and in the future.

The fallout from the Global Financial Crisis and its impact on the welfare sector is the focus of the country’s pre-eminent social policy conference, to be held at UNSW 28–30 September.

The biennial Australian Social Policy Conference, which is hosted by the Social Policy Research Centre (SPRC), brings together researchers, practitioners and policy makers from across disciplines with a view to influencing debate and practice.

While Australia has managed to retain and even expand social provision, particularly with the introduction of the National Disability Insurance Scheme, conference organisers believe this could be threatened, as it is in other countries.

Visitors to UNSW’s Michael Crouch Innovation Centre (MCIC) can experience this dramatic view of Mumbai’s Jain Temple by standing under a six metre-wide immersive dome in a project led by UNSW Art & Design Professor Sarah Kenderdine. Look Up Bombay! is a 4K (4096 x 4096 pixels) algorithmically driven artwork developed by Kenderdine and her collaborators. It is comprised of 160 gigapixel spherical images shot on location.

DomeLab, the highest resolution digital dome environment in Australia, will premiere at the launch of the MCIC in September and will be on display until late November.

It features 14 art and science movies, many showcasing UNSW-based innovations.

DomeLab is supported by an ARC LIEF Grant in collaboration with 10 organisations and will tour partner venues across Australia and internationally over the next five years. The MCIC, which is housed in the new Materials Science Building, was established with support from Australian businessman Michael Crouch.

UNSW has continued its upward trajectory in the prestigious Academic Ranking of World Universities (ARWU), climbing to 125, up five spots from last year. For the second consecutive year, UNSW leads all Australian universities in the field of Engineering/Technology and Computer Sciences, moving up to 41 in the world.

UNSW also fared well in specific subject rankings: it ranked first in the country in Mathematics, and is ranked in the top 100 in the world in Clinical Medicine and Pharmacy, Economics/Business, and Computer Science.

“This is an excellent result for UNSW, highlighting the calibre of our research and the strong international standing of our academics,” says Professor Les Field, Deputy Vice-Chancellor (Research). “We are committed to improving our performance internationally, and are working to ensure that we continue our upward trend of recent years in this important global ranking.”

Professor Stefan Rahmstorf, one of the world’s foremost climate scientists and climate science communicators, will work with Professor Matthew England at UNSW’s Climate Change Research Centre until February 2016. Rahmstorf is one of the founders  of the internationally awarded Real Climate blog described by Nature as one of the top five science blogs in 2006 and was named one of the world’s top 10 climate scientists in 2009 by the Financial Times. He is also the co-author of four books including Our Threatened Oceans and The Climate Crisis. He has been a lead IPCC author and was a member of the German Advisory Council on Climate Change from 2004–2013.

One of the Murray–Darling Basin’s most important wetlands, the Macquarie Marshes, has become drier during the past 20 years, leading to severe loss of ancient red gum trees and invasion of terrestrial plants, two UNSW studies have revealed.

The current drought, the development of dams, and the diversion of water for agricultural irrigation are the main causes of the drying, which will be further exacerbated by climate change.

“The Macquarie Marshes is a Wetland of International Importance under the Ramsar Convention. But our research shows the marshes, which provide vital habitat for millions of waterbirds, are progressively drying out,” said Director of the UNSW Centre for Ecosystem Science Professor Richard Kingsford, an author on both papers.

“The plants tell the story: river red gums have died in large numbers in some areas and the reeds and other aquatic plants that used to be wet most of the time are not receiving as much flood water as before.”

In one of the studies, researchers led by Katherine Catelotti investigated changes in the condition of 212 river red gums, which were repeatedly monitored from 1993 until 2012.

“We found nearly half – 44% – of the river red gums that were alive and healthy in 1993 were dead by 2012, despite the widespread flooding at the end of this period,” she said.

Scholarship to balance work  and parenthood

Balancing parenthood with academia is set to become easier with a UNSW Medicine scholarship that will help early career women focus on research when returning to work after parental leave.

The scholarship – named after the NSW Woman of the Year Professor Minoti Apte – will provide eligible staff with relief from teaching and administration to write publications, grant applications and access research assistance.

UNSW Medicine Dean Rodney Phillips said the scholarship –  the first of its kind in the faculty – reinforces a long and proud tradition of promoting women.

Apte said she was thrilled to have a scholarship named in her honour: “My path from medical student to senior academic while raising a family was challenging. I was lucky to have received a lot of support but inequality and disadvantage for women returning to work remains a big problem in Australia,” she said.

For more information go to med.unsw.edu.au.

Dementia research has been given a major boost with UNSW researchers receiving $13 million from the National Health and Medical Research Council.

The grants will allow teams of researchers to collaborate on dementia research and focus on the effective translation of research over the next five years.

Professor of Neuroscience Glenda Halliday received $6.5 million to improve diagnostic detection of non-Alzheimer’s disease forms of dementia, which are commonly under-recognised or misdiagnosed. The research will focus on new detection methods and pilot novel treatments for frontotemporal dementia and dementia with  Lewy bodies.

“This will inform both clinicians and families on what they may expect to happen with these different forms of dementia,” Professor Halliday said.

The ‘Maintain Your Brain’ trial will recruit 18,000 people to test whether an internet coaching tool can reduce the risk of dementia. Half of the trial participants will be given information on managing dementia risk factors, while the rest will get extra support through online tools connecting them with medical specialists and tailored health interventions.

Brodaty said there remains a lack of understanding in the community regarding dementia risk factors, such as lack of physical activity, obesity, depression, smoking and excess consumption of alcohol.

“If older people increased their efforts to address these risk factors by just 5 or 10%, several million people could keep dementia at bay,” he said. “The real attraction of this program, if it works, is that it could be delivered internationally via the internet.”