Composer and Head of the School of Arts & Media Andrew Schultz has two works nominated in this year’s Art Music Awards. 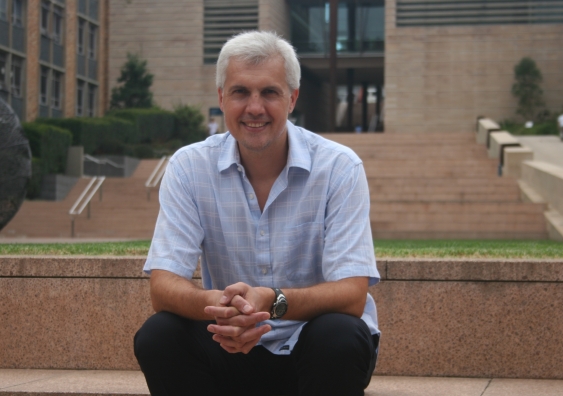 Two works composed by Head of the School of Arts & Media Professor Andrew Schultz have been nominated in the 2016 Art Music Awards.

Both of Professor Schultz’s nominated works are in the category Vocal/Choral Work of the Year: Le Molière Imaginaire, for eight voices, and Paradise, five songs for soprano, cello and piano.

The comical Le Molière Imaginaire was inspired by the final scene in Molière’s last play, Le Malade Imaginaire (The Imaginary Invalid), a musical interlude in which a faux medical graduation ceremony is enacted in a bizarre mixture of Latin, French and Italian. The 17th-century playwright despised doctors and the farcical scene was his way of taking aim at the medical profession.

Professor Schultz and co-writer Timothy Knapman created a version of the scene in Latin and English for British vocal ensemble Fagiolini, who performed the world premiere of the comic romp as part of Musica Viva Australia’s 2015 International Concert.

Paradise is a cycle of five songs for soprano, cello and piano. It uses Professor Schultz’s own poems in which a physician observer wrestles with the small-scale detail and large-scale effect of a horrific and violent event.

It was written for Felicitas Fuchs, Li-Weir Qin and Bernard Lanskey, who first performed it in Paris in June 2015. It had its Australian premiere at UNSW last September in a concert by vocal ensemble Halcyon.

The Art Music Awards are presented each year by the Australasian Performing Right Association (APRA) and the Australian Music Centre and recognise achievement in the composition, performance, education and presentation of Australian art music, which spans contemporary classical, contemporary jazz, electroacoustic, improvised and experimental music.

The 2016 Art Music Awards will be presented at the Plaza Ballroom in Melbourne on 16 August.