Father and son Geoff and Tim Harcourt on how family, history and a love of economics led them to very different academic careers 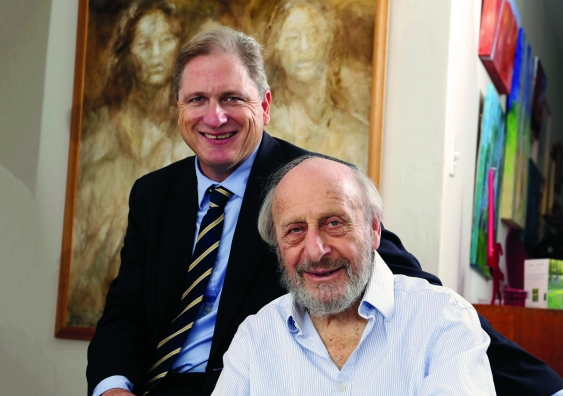 Tim Harcourt was politicised early in life through his parents’ involvement with the union movement and politics. His father opposed the Vietnam War and the family house was often filled with unionists. His mother stood as an ALP candidate in South Australia in 1968.

When he came to choosing a field of study, his father’s eminence in economics – Harcourt senior had established himself as a major figure in left-wing economics at Cambridge through his 1972 book Some Cambridge Controversies in the Theory of Capital – shaped the son’s intellectual outlook. After graduating from the University of Adelaide with a Bachelor of Economics, Tim Harcourt soon found himself working as a research officer and advocate at the ACTU.

There was one major theoretical difference between us, says Tim. “Dad focused on capital theory (means of production); I was interested in labour theory and markets.”

“I was bad at physics and chemistry, and did economics as a fill-in subject.”

That platform guided Tim towards the area of trade.  “When I was at the ACTU, then Secretary Bill Kelty asked me what I was interested in apart from my day job.” It was a period after Hawke and Keating had reformed the economy and the spotlight was turning to trade, with the creation of the World Trade Organization in 1995.

“I said: ‘Aboriginal affairs and international trade.’ He gave me responsibilities for both.” Trade soon became his main interest.

In 2000, after Tim had moved from the ACTU to chief economist at Austrade, he undertook research into global trade which found that exporters were more unionised, paid higher wages, and provided better health, safety and equal employment opportunity conditions. His two areas of interest, trade and working conditions, had found common ground, just as his father had earlier with his books on capitalism and academia.

Harcourt senior says his career path was more accidental than his son’s. “I was bad at physics and chemistry, and did economics as a fill-in subject,” he says. Between an aptitude for the fill-in subject and some inspirational teachers, he gained excellent results that set him on a path to Melbourne University, then Cambridge and later Adelaide University.

He recalls his time at Cambridge with fondness, working with many leading economic thinkers, such as Joan Robinson. At Cambridge he was supervised by  Ronald Henderson (who later came to Australia and wrote a landmark report into poverty in 1973, that created the ‘Henderson Poverty Line’).

After returning from Cambridge, Geoff was made an Emeritus Fellow at UNSW, where he continued to research and write. Such is his standing that in 2011, the Cambridge Journal of Economics held a conference in honour of his 80th birthday.

That same year, Tim moved from the public sector into academia with his appointment at UNSW. Father and son were finally united, academically. Tim says: “When I got my first job, as an economist at the Reserve Bank in the 1980s, Dad said: ‘It’s okay but it’s not academia,’ and it was the same when I worked for the ACTU and Austrade.”

In his current role as JW Nevile Fellow in the School of Economics, Tim is now in demand as a commentator on everything from politics to trade, and also enjoys engaging with the public on a popular level. His book The Airport Economist (2008), which was an informal companion for Australian businesses on developing new markets, has since been turned into a television show on Sky News and fittingly enough (for an airport economist) Qantas.