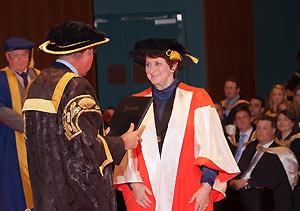 Susan Ryan, who was presented with an Honorary Doctorate of Letters, served in senior portfolios in the Hawke Government, where she was the first woman to hold a Cabinet post. A committed feminist, she pioneered extensive anti-discrimination and equal opportunity legislation. In 1990, Ryan was appointed Officer of the Order of Australia for her contribution to Parliament.

She has also held a number of senior positions in industry, including President of the Australian Institute of Superannuation Trustees.

Ryan has a long relationship with UNSW.  She is a former Pro-Chancellor and a long-serving member of the UNSW Council. In 2010 she was appointed as the inaugural chair of the Advisory Council for the Faculty of Arts and Social Sciences.

An Honorary Doctorate of Letters has also been awarded to   Professor   Patrick Dodson.

Professor Dodson is a Yawuru man from Broome in WA. He has dedicated his life work to advocate for constructive relationships between Indigenous and non-Indigenous people and is a recipient of the Sydney International Peace prize.

He is a former Royal Commissioner into Aboriginal Deaths in Custody, former Chair of the Council for Aboriginal Reconciliation and is currently Co-Chair of the Expert Panel for Constitutional Recognition of Indigenous Australians.

He was the founding Director of UNSW’s Indigenous Policy and Dialogue Research Unit and accepted an honorary professorship when his appointment ended earlier this year.

In 2011, he was elected to the Federal Government’s Financial Sector Advisory Council. Bouris was also chair of the Ministerial Expert Group on Electronic Commerce and has made a number of submissions to the Productivity Commission’s Inquiry into First Home Ownership.

He has served as an Adjunct Professor in the Australian School of Business (ASB) and is a long-serving member of ASB’s Advisory Council and a founding member of the Alumni Leaders Network.

Also recognised this week is Dr Hilton Immerman who was awarded an honorary fellowship for his eminent service to the community. Dr Immerman has been Master of UNSW’s Shalom College and CEO of The Shalom Institute for 24 years.

He was instrumental in establishing the Shalom Gamarada Ngiyani Yana residential scholarship program for Aboriginal medical students. The program offers a model of best practice in the recruitment and retention of students and has helped boost indigenous retention rates at UNSW.

Dr Immerman was awarded a Medal of the Order of Australia in 2004 for service to the Jewish community, particularly through adult education and youth leadership programs.

The awards were presented as part of the University’s August graduation ceremonies.

Reconciliation - the next chapter