Information may be changing as quickly as the COVID-19 virus mutates, but being open and transparent about it fosters trust and social cohesion. 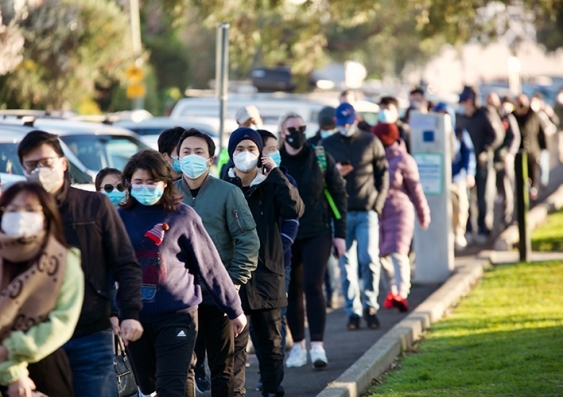 People line up in St Kilda, Melbourne, to get their COVID-19 vaccinations. Photo: Shutterstock

They say truth is the first casualty in any war, so what happens in a pandemic? Does it take to its bed with a fever?

Our capacity to believe and determine what is true has taken a battering over the last 18 months. Almost daily, we are asked to sort fact from fiction and information from misinformation.

Evidence – and accordingly, public health messaging – is changing rapidly, from the origins of the virus, to modes of transmission and mask usage, right through to vaccine recommendations for different age groups.

To people familiar with the scientific method, this is just how it works – researchers learn more about a subject, brief policymakers on implications, who then draw up new rules and regulations to deal with it.

But rarely has this process been so sped up, nor under such intense scrutiny. Criticism of the decisions, messaging and integrity of experts and lawmakers appears to be rising in volume as the pandemic drags on.

At the extremes are those who reject the prevailing narrative outright, like the idea that governments, big pharma, media and law enforcement agencies are all in cahoots and using the pandemic as a cynical play for power and control.

Then there are those who accept COVID but reject the strategy. They might feel unfairly targeted by police or worry about the effect of lockdowns on our mental health, or have concerns about the safety of vaccines.

But most Australians just go along with it. They may complain about the restrictions or even think them unfair, but ultimately they seem to believe and trust the reasoning of the leaders and experts, even when that reasoning appears to change.

The doubters laugh and call the compliant masses ‘sheeple’. Well, are they?

Changes in what we know to be true is no reason to reject all purported truths. Photo: Shutterstock

What it takes to believe

Epistemologist, philosopher and Emeritus Professor Stephen Hetherington has dedicated his life to understanding how truth, belief and knowledge are intertwined. What is it to truly know something? Can we know things that we haven’t experienced? Is there such thing as an objective truth? And if there isn’t – as philosophical sceptics believe – why should we believe anything anyone tells us?

Prof. Hetherington, who for the past 30 years taught UNSW students about logic, truth, belief, metaphysics and epistemology, says in the age of COVID-19, uncertainty and the disagreement it provokes can be a good thing. It is not reason enough to reject the prevailing, common knowledge of our time. Still, he says, we do need to take care with using the word ‘knowledge’.

“People should not give up on the idea of truth just because there is disagreement. That would be making a very simple epistemological error.”

Prof. Hetherington says the sceptical philosophers’ position on truth demands that for something to be universally knowable, it must be infallible. And taking this idea a step further, sceptics would argue that if we can’t prove that truth is entirely objective – in the sense of it being rationally apparent to everyone –  then we must reject all claims to truth.

But as Prof. Hetherington points out, fallibility is an essential part of discovery, especially in areas like science and medicine.

“If you’re a fallibilist, you welcome or embrace the idea of knowing something even while meeting a standard that isn’t answerable to that level of perfection.”

So the fact that experts still haven’t located the source of the original SARS-CoV-2 virus, or the World Health Organisation and local health authorities are regularly changing their recommendations is part of the process towards refining our knowledge and truths.

“When we know that we know how. For example, med students are taught a whole range of apparent truths they need to remember, but later, when they’re practising, they’ll know what to do with them, which may even mean throwing some out and updating them with new beliefs – ones that will be seen as new knowledge.

“What was deemed true in medicine 100 years ago is a lot different now. This is the idea of pragmatism in philosophy founded by people like Charles Peirce in the late 19th century. For him, it is that truth is what is agreed by everyone in the long term.”

This same pragmatic approach to knowledge can be used by the rest of us when we’re trying to work out what’s true as experts, politicians, advocates and commentators present their own conflicting facts, beliefs and arguments.

“You could say there’s an art to believing. If you genuinely try to care about evidence and not let your emotions interfere – even ones that seem rational – that’s a good start.

“And make sure your evidence is coming from a variety of sources, not just the feedback from your favourite people. If you can believe in a non-dogmatic way, you shouldn’t be aggressive about it and you should be prepared to change it if you are presented with new evidence.”

Prof. Hetherington wonders whether our modern society, and especially the media, have developed an aversion to changing positions or beliefs. Politicians dread the labels ‘backflipper’ or ‘flip-flopper’, but perhaps admitting a change of thinking should be seen as a strength – at least some of the time.

“If the evidence changes a bit, and the view of the truth changes in two weeks’ time, well, so be it,” he says.

“But it doesn't follow that the person changing their view was in bad faith or that there was no point to their following the evidence. What is much more important is being transparent about any change in reasoning rather than downplaying or hiding it with weasel words and spin.” 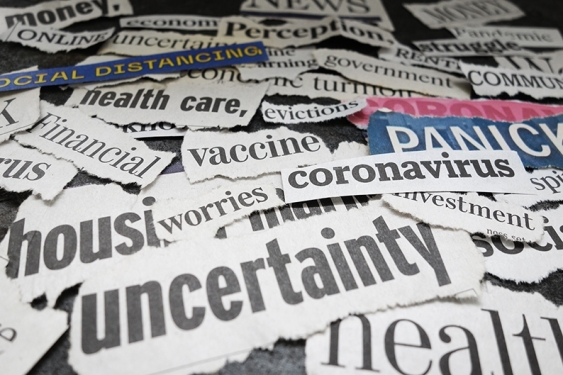 Repeated exposure to negative media headlines can amplify the perceived risk someone may feel beyond the actual risk. Photo: Shutterstock

Why we try and avoid uncertainty

Being more flexible and adaptive to situations where knowledge and information are in a state of flux is a big ask when humans are notoriously uncomfortable with uncertainty.

Dr Adrian Walker with UNSW’s School of Psychiatry recently released research that examined why uncertainty may make us change our behaviour, even when it’s not in our best interests.

“Uncertainty is inherently an aversive thing – it takes some effort to accept that you’re uncertain about particular outcomes,” Dr Walker says.

“So when it comes to changing messaging – because the situation is inherently uncertain, and governments and policymakers are trying to adapt – people really want to know that there’s a plan. In one sense, sticking to a bad plan may be easier than to a plan that keeps changing, from a psychological perspective.”

The chopping and changing in recommendations about the COVID vaccines earlier this year provoked confusion, fear and uncertainty in many who otherwise had no problem with getting vaccinated. Dr Walker says this is caused by what is called the availability bias.

“Things that are current and that you often hear about come to mind more fluidly and you can give more weight to them when you’re making decisions.

“For example, we will hear about the one person in 200,000 that ended up with a blood clot after getting an Astra Zeneca vaccine in the media and it’s a situation that comes to mind easily, but you don’t hear about the 199,999 people who got the vaccine with no adverse effects.

“But people in general aren’t that good at understanding these base rates about understanding probability – to say you’ve got a one in 200,000 chance of getting a blood clot doesn’t mean that much to anyone.”

So if humans have an aversion to uncertainty, yet being transparent engenders trust, should those controlling the messaging in this pandemic be more selective about what information is released to the public, and when?

For social scientist Associate Professor Holly Seale, this would go against the principles of good governance and could potentially do more harm than good. She says open and clear communication is vital if you want to bring people along with you in a public health campaign. 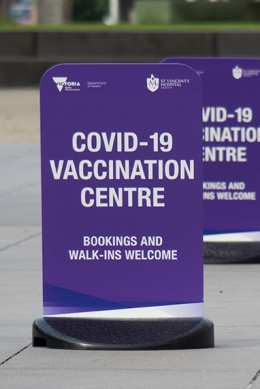 Vaccine hesitancy appears to have decreased in recent months in Australia. Photo: Shutterstock

“It’s critical to be transparent,” says A/Prof. Seale, who is an expert in vaccine implementation with UNSW’s School of Population Health.

“The important thing is to be supporting the community through these periods. Whether or not that’s been done sufficiently in the COVID vaccine program is still being debated. But we always knew that with the rollout of this vaccine program there would be changes needed.”

She says the speed of change and the degree of urgency with the COVID pandemic has made the vaccination program – and the messaging around it – a different ball game. The changing of guidelines around the Astra Zeneca vaccine is a case in point.

“The changes in the COVID vaccination program have come at a pace that we just don’t have any history of. And the media coverage has been so much larger and so much more intensive than anything previously. How the community is able to digest the changes, and then the rationale for change, has been the complicating factor.”

While the media has a useful role to play – for example, news outlets can present information more clearly than health department websites tend to – it isn’t the biggest influencer in swaying people’s beliefs about vaccinations.

The recent boom in vaccinations rates in NSW that places it among the fastest in the world seems to bear out A/Prof. Seale’s argument that uncertainty has not had the dampening effect on social cohesion that many may have feared.

And with the 70 per cent double-vaccination target now within reach in worst-hit NSW, do we really need to worry about convincing the people averse to getting the vaccine for philosophical, ideological or religious reasons?

“The focus is the larger proportion of people who are open to the idea, including those not comfortable and confident right now, rather than those rejecting it on philosophical grounds.

“But one thing that is really encouraging is we’re seeing a drop in vaccine fence-sitters in a way that we haven’t seen before, and the proportion of people who are now willing to go out and get vaccinated has increased.”