Universities must play their part in tackling the plight of refugees, UNSW Vice-Chancellor Ian Jacobs has told a World Refugee Day event in Sydney. 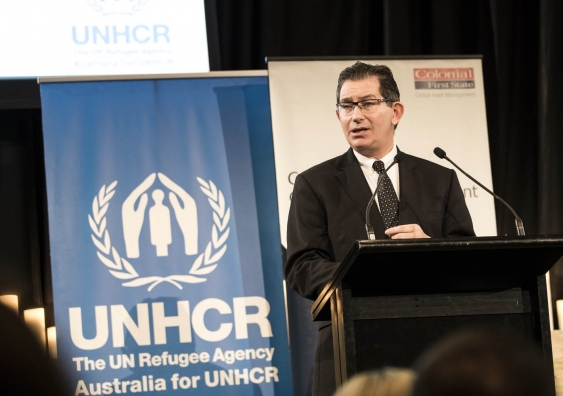 Universities must play their part in tackling the plight of refugees, “the greatest moral issue of our time”, UNSW President and Vice-Chancellor Professor Ian Jacobs has told a World Refugee Day event.

About 500 people had filled the Ivy Ballroom in Sydney for Australia for UNHCR’s World Refugee Day Breakfast, its annual fundraising event.

Delivering the keynote speech, Professor Jacobs told the audience that the world had become preoccupied with keeping people out and creating more walls and barriers than ever before.

Fortunately, there were leaders such as German Chancellor Angela Merkel who felt the moral obligation to act, and even said she was proud her country could give a friendly welcome to refugees.

“We must follow that example and find solutions, and universities … must play their part. In the growing climate of political instability, and in the absence of substantive leadership in many nations, universities can be not only institutions for learning and for research but also agencies for social justice and policy improvement and active, positive change,” he said.

Forced displacement was currently at its highest level since records began, with more than 65 million people forcibly displaced worldwide and 1.2 million needing to be resettled. According to UNHCR, 34,000 people were displaced from their homes every day by conflict or persecution but there were only 225,000 resettlement spots globally each year – enough for only one week’s displaced people, Professor Jacobs said.

That number would be even smaller next year, when the Trump Administration planned to cut its quota from 110,000 people to 50,000.

“All these people need our help yet our systems for governing these crises, these human tragedies, have not kept pace,” he said.

This was highlighted in an Oxfam study last year that showed the world’s five wealthiest countries – the United States, China, Japan, the United Kingdom and Germany – making up half the global economy, were hosting fewer than 5% of the world’s refugees.

“By contrast, the five countries that have taken the most refugees – Jordan, Lebanon, Turkey, Pakistan and the Palestinian Territories – host a staggering 50% of the world’s refugees, while making up less than 1.5% of the world’s economy,” Professor Jacobs said.

There was ample evidence of the social and economic contribution made by refugees, who filled labour gaps, helped increase demand for goods and services, demonstrated entrepreneurship and innovation, and passed on vocational skills.

What the world needs, what the refugees need, is action based not on political agendas, because politics is too often what caused them to be refugees in the first place, or on ‘alternative facts’, but on knowledge and on expertise.

A 2011 report by Professor Graeme Hugo that tracked the contributions of first- and second-generation refugees in Australia since 1975 revealed that on average they had higher levels of education than the Australian-born population, greater entrepreneurial qualities – five of the eight billionaires in Australia in 2000 came from a humanitarian settlement background – and often higher levels of participation in paid and volunteer work.

In other words, they were some of Australia’s most productive and successful people, Professor Jacobs said.

“So, the widely accepted view that refugees are a burden on the economy is at worst misinformed and at the very least short-sighted; as they become part of the local community, refugees often forge ahead with their determination to succeed,” he said.

Yet even with so much evidence of the economic benefits that refugees could bring, there was still much concern and hostility to the idea of accepting more refugees.

Compassion and empathy, while essential, were not enough: “What the world needs, what the refugees need, is action based not on political agendas, because politics is too often what caused them to be refugees in the first place, or on ‘alternative facts’, but on knowledge and on expertise,” Professor Jacobs said. “Where will that come from? At least part of the answer is from universities.”

UNSW was focusing heavily on practical outcomes, with the work of the Institute for Global Development and the Forced Migration Research Network, and the informed analysis of the Andrew & Renata Kaldor Centre for International Refugee Law. The ambitious UNSW Grand Challenges program was taking on the big issues dominating the global agenda, including climate change, migration and refugees, and inequality.

“On these sorts of interrelated issues, universities can and should play a greater role,” Professor Jacobs said. “Our resources can have massive impacts on the lives of refugees, whether in medicine or crisis management, in law, language teaching or even philosophy. Empathy, respect and the acceptance of others matters as much as more practical issues around resettlement, education and employment.”

He was also "enthused by the refugee community support program announced in recent Federal Budget", which would allow individuals and businesses to sponsor refugees, based on the successful Canadian private refugees sponsors scheme.

“Today, I personally and on behalf of UNSW give the strongest backing to Australia for UNHCR’s We stand together #WithRefugees campaign to send a clear message to all governments that we must act with solidarity and shared responsibility to ensure that every refugee family has somewhere safe to live; that every refugee child gets an education; and that every refugee can work or learn new skills to make a positive contribution to their society,” Professor Jacobs said.

From Manus to the Mexico-US border: what’s the future for refugees?