There are major opportunities for growth in the trade and business relationships between Australia and India, the Chairman of the Tata Group told an audience at UNSW after receiving an honorary Doctor of Business. 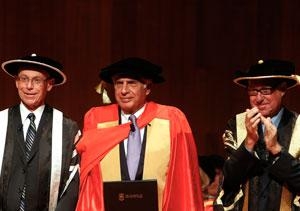 There are major opportunities for growth in the trade and business relationships between Australia and India, Mr Ratan Tata, Chairman of the Tata Group, told a packed audience at the University of New South Wales last night.

“The two countries have reason to do much more together than they have done,” Mr Tata said.
"Australia is really at the forefront in many areas of high technology ... and India seeks in many cases some of that technology.”
Mr Tata also pointed to the enormous scope for Australian business to export products to India at a scale Australia doesn't currently provide, with India adding the equivalent of the Australian population annually.
He said a free trade agreement between Australia and India might remove some of the barriers and he felt “very positive” about the Tata Group – India’s largest corporation – investing more in Australia.
Mr Tata was at the University to receive the degree of Doctor of Business honoris causa. The honorary degree – UNSW’s highest award – recognises his eminent service to the global community and was presented on the eve of his retirement.
Vice-Chancellor Professor Fred Hilmer described him as “a brilliant businessman both in India and internationally, a driving force behind the resurgence of India as an economic and world power, a philanthropist with a social conscience and a passionate advocate for advances in technology, innovation and higher education.” Read the full citation here.
Following the degree ceremony, Mr Tata participated in the Wallace Wurth Dialogue, answering questions from UNSW Chancellor David Gonksi and Professor Hilmer as well as taking questions from the capacity audience.
Mr Tata highlighted the importance of international education in creating long-term relationships between people and countries and cited student exchanges and internships as critical to establishing stronger bonds between India and Australia.
“We have to make the two countries more familiar with each other at a citizen level,” he said.
Named as one of India’s most powerful people, Mr Tata is an internationally respected corporate leader and philanthropist. The phenomenal success of the Tata Group under his leadership is attributed to his vision and philosophy of loyalty, dignity and corporate social responsibility.
Asked what he would like to see as his legacy, Mr Tata said it was to have led the Group through a difficult period and have it grow and transform without sacrificing the corporation’s values and ethics.
A video of the full dialogue is available here.
The Wallace Wurth is UNSW's flagship public lecture series named after the first Chancellor of the University, Wallace Charles Wurth.
Media contact: Denise Knight, UNSW Media Office | +61 2 9385 8920 | +61 405 207 685