Opinion Revisiting Shane Warne: The Musical – this brilliant show is an Aussie classic

First staged in 2008, Shane Warne: The Musical is an overwhelmingly faithful rendering of Warne’s life, staging both his triumphs and his downfalls. 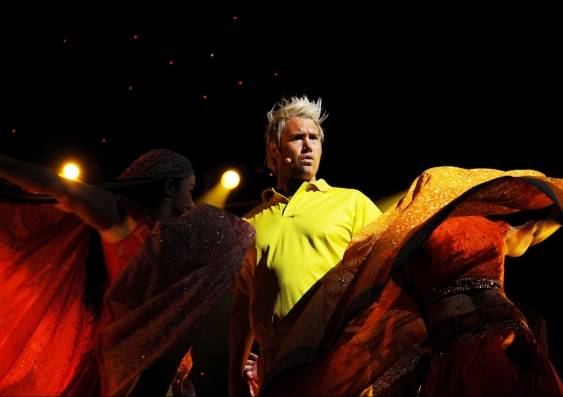 In response to the tragic death of Shane Warne last week, actor and composer Eddie Perfect took to Facebook to express his shock and surprise at Warne’s sudden passing.

“I just don’t want to say goodbye – there was so much more life to come,” he wrote.

Before Perfect was the composer for the Tony award nominated Broadway musical Beetlejuice, his first full-length musical was something much closer to home: Shane Warne: The Musical.

The musical started as a joke. In 2005, Perfect was on tour performing in The Big Con with Max Gillies and kept seeing Warne’s name all over the newspapers. He made an offhand comment in a phone call to his manager, Michael Lynch, that someone should write a musical about the cricketer.

To his great surprise, Lynch (a great cricket fan) told him to go for it.

The resulting musical is an overwhelmingly faithful rendering of Warne’s life, staging both his triumphs and his downfalls.

It took Perfect three years to write the show, in which he read every book about Warne he could find (he joked in his Facebook post he has a master’s degree in Warney) before a full production opened in Melbourne’s Athenaeum Theatre in December 2008.

In 2009, it went on tour, playing seasons at the Regal Theatre in Perth and the Enmore Theatre in Sydney.

While it was critically acclaimed, it did not perform as well as expected at the box office and closed early.

Five years later, in 2013, the musical was revised and presented in a revamped concert version. This iteration added new material covering Warne’s retirement from international cricket, his dramatic weight loss and his high profile relationship with the actress Elizabeth Hurley.

While the musical may have started as a joke, in style and substance it is anything but. It deserves to be considered an Australian musical theatre classic.

A repertory of our national characters

Shane Warne: The Musical is about more than just Shane Warne.

It is about Australia, and why we found Warne to be such a captivating figure.

It is about how Warne was, on the one hand, a lionised national sporting hero, and on the other, a disappointingly fallible human being.

It shows how Warne embodied the repertory of our national characters: underdog, everyman, outlaw and tall poppy.

But the musical also treats Warne with great empathy and nuance. Perfect’s moving rendering of Warne’s relationship with the late Terry Jenner is a tender portrayal of the coach-player dynamic.

Warne’s bowling style has often been compared to fine arts like poetry or classical music. These sport-as-art metaphors are explored in That Ball which centres on the moment Warne bowled the ball of the century.

A slow, august ballad in the vein of the late Stephen Sondheim, the song recalls the process by which a situation is transformed into an event of significance: that shot, that race, that ball.

The lyrics describe the feeling of watching history being made: “someone was talking, I said ‘shut up one sec!’ and the hairs stood up on the back of my neck.”

Told from the perspective of ordinary spectators, That Ball represents the profound act of such a sporting achievement. What it means for individuals, for a nation, how it lingers in collective memory: “I remember that ball like it was yesterday and never will forget.”

Warne was initially not sold on the idea of a musical about him, and Perfect tried, through the media, to stress the musical was not going to be a merciless attack on the cricketer.

Eventually, these arguments cut through. Warne attended the opening night performance and – ever the media personality – came up on stage to bow with the cast after the curtain call.

He even published a positive review which admitted he had felt nervous sitting in the audience (“More edgy, even, than facing Pakistani quickie Shoaib Akhtar on a green, seaming deck, I reckon”) but the production had won him over by the end:

I think Eddie and his team have written the musical in a respectful and sympathetic way, and that they have captured my fun, larrikin side.

In light of Warne’s untimely passing, revisiting Shane Warne: The Musical is a funny, touching, clever, and joyous way to honour his legacy. It is well overdue for another production.