With the Tokyo Olympics delayed until 2021, UNSW Commerce student Henry Hutchison has a long wait between Games, but he’s making the most of his time 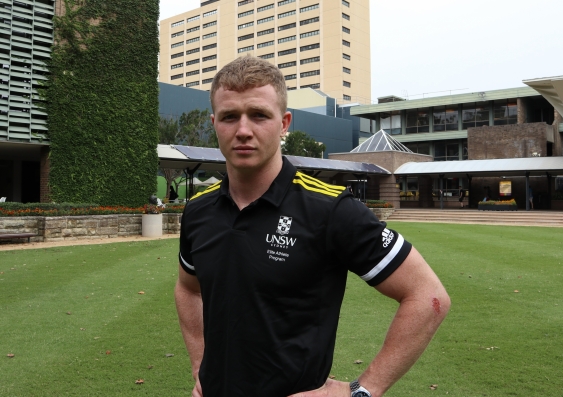 UNSW Commerce student Henry Hutchison is excelling on and off the field due to the support of the Elite Athlete Program. Photo: UNSW Sport

At the beginning of this year, UNSW Elite Athlete Program member Henry Hutchison was buzzing.

His Australian Men’s Rugby Sevens team were flying high and he was almost assured of a ticket to Tokyo and his second Olympic Games after a series of outstanding individual performances.

Then of course, the world was struck down by Covid-19, the Olympics were postponed and sporting competitions across the world were put on hiatus.

As a Rugby Sevens player, Hutchison’s playing career relied on flying around the world to frequent tournaments.

Once a glamourous lifestyle, it quickly became a casualty of the new world order and Hutchison was homebound for much longer than he had been for many years.

With no jetsetting on the horizon for some months, Hutchison took the opportunity to reconnect with his old club team Randwick.

While it’s not comparable to the Olympics, heading back on to the field with the ‘Galloping Greens’ in the Shute Shield this weekend will help Hutchison work towards another goal that has been playing on his mind.

“I think if, I'm lucky enough to go to a second Olympics and hopefully medal this time, I will definitely look at pursuing 15s,” he said.

“There's always that dream and that drive to play for your country…to play for the Wallabies, which would be a goal of mine.”

His other priority during this time has been his studies, driven by the motivation to continue to achieve in life once his playing days are behind him.

“I'm studying commerce, so that's a broad degree,” he said.

“And with rugby you meet so many people around the world, it's such a global game.

“A lot of corporates sponsor the team and get involved around tournaments and games, so your network becomes quite large.

“I think with that degree, and my football, they work really well together and hopefully I can secure a job shortly after I retire.”

While balancing his studies with a professional sporting career has been far from easy, Hutchison attributes his success to the excellent assistance he has received through UNSW’s Elite Athlete Program.

“I think UNSW have done a really good job with creating the program,” he said.

“The 24/7 support that is offered to adapt to all situations for so many different athletes. I'm playing rugby, but I know we've got athletes in Water Polo, cricket, athletics, that all have different needs and different requirements that UNSW just adapts to, and they're very flexible.

“I'm traveling six months of the year and UNSW are just doing everything they can to keep giving me the information I need to continue to my degree or finding supplementary exams for me to finish and I've never really had an issue.”

Hutchison has no hesitation in recommending UNSW to his peers that are considering university study.

“It's an athlete friendly university,” he said.

“The elite athlete program is one of the best I've seen and the support is consistent and always readily available to you.

“They're always encouraging you to study, always pushing to get the best out of you. But then they're not putting too many demands, or too much stress on you that you feel university is a chore.”

Looking ahead to Tokyo, Hutchison is motivated to keep working towards the postponed Games.

“I think at the last Olympics, it all happened so fast and I was just there as a young 19-year-old.

“The whole tournament just kind of just went by me and I left Rio thinking ‘Oh did that just happen?’

“Four years on I've got a bit of a better idea of how to approach it.”

Though he enjoyed the colourful, slightly chaotic nature of Rio, he’s looking forward to the different approach Tokyo will bring when the Games finally roll around.

“Rio really put on a show. It was fun, it was a little bit disorganised, which made it even better.

“But I think it will be the polar opposite in Tokyo - they're finished, they're ready.

“I’m really looking forward to being a part of Tokyo and being in a Games that's going to be so efficient and smooth.”