For one family, the resources available to support Indigenous people at UNSW – including the Shalom Gamarada Residential Scholarship – have been especially valuable for career success. 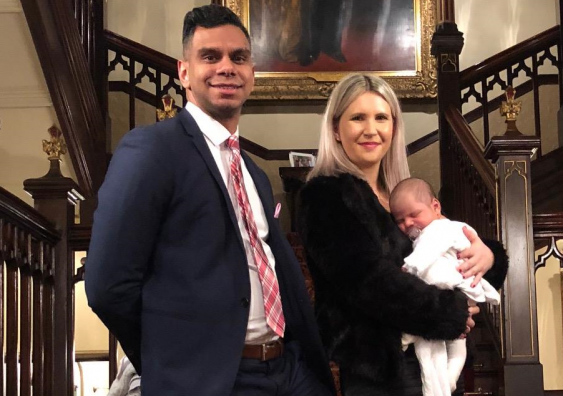 Jonathon Captain-Webb and Danielle Captain-Webb, with baby Djuralye, at the inaugural Aboriginal leaders dinner at Government House in July.

Danielle Captain-Webb says it’s hard for her to say that she’s a role model for Indigenous youth.

But the 25-year-old mother-of-three, lawyer and UNSW graduate says she would like to think that she “can inspire people to overcome what they think are barriers and achieve what they want”.

“I like to think that I’m able to show young Indigenous kids that no matter where you come from and no matter what people say about you or your abilities, you can achieve whatever you dream to do, you can do it,” Mrs Captain-Webb says.

“I like to think that young Aboriginal kids look at what I’ve achieved ... especially Aboriginal women, especially mothers, who think that they are not able to do things for themselves or study because they’ve children who they are caring for. I think that completing further education or tertiary education while having children is probably the best time.”

Like her husband Jonathon, a Dunghutti-Gomeroi man, Mrs Captain-Webb was the first person in her family to attend university.

They met at Shalom College, where they were both recipients of the Shalom Gamarada Residential Scholarship.

Her brother Steven, a second-year Medicine student at UNSW, is also a recipient of the scholarship, which was founded 13 years ago by Shalom College’s former president Ilona Lee AM and former UNSW Lecturer in Aboriginal health, Professor Lisa Jackson Pulver AM. 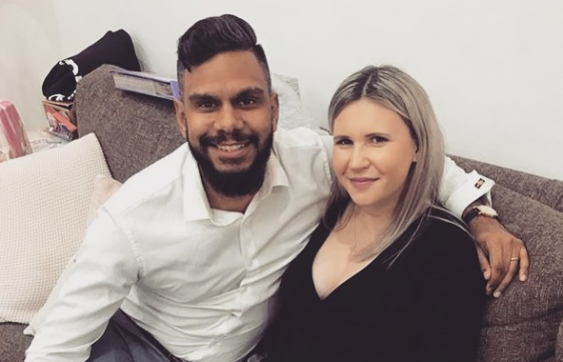 'UNSW has a lot of support networks in place': Jonathon Captain-Webb and Danielle Captain-Webb

According to a Shalom Gamarada spokesman, someone in the Faculty of Medicine had approached Shalom College to see if assistance could be provided for a disadvantaged Indigenous medical student who had a long commute to UNSW.

The benefits of living on-campus were tangible and since then, 41 Indigenous students have benefited from a Shalom Gamarada scholarship, a partnership between Australian Indigenous Education Foundation, UNSW’s Nura Gili Indigenous Programs Unit and the Muru Marri Indigenous Health Unit, which provides free accommodation, meals and tutoring support.

More than half of the scholarship recipients are now doctors, seven are lawyers and the balance a mixture of graduates from commerce, social work, architecture, optometry and aerospace engineering.

Mrs Captain-Webb initially enrolled in a UNSW bridging course, the Diploma of Humanities.

But the former student from Mangrove Mountain on the Central Coast says she struggled with commuting three-hours one-way between home and UNSW for four days a week.

“It was crazy, I was leaving home at five in the morning,” she says.

“My marks were really average, I was so exhausted and I wondered how long I could keep doing this.”

That all changed after receiving the Shalom Gamarada Residential Scholarship midway through her first year.

“By the end of that year, I got the marks I needed to transition into my law degree, and then once I was in my law degree I continued to get better marks, and by the time I finished my degree I was getting distinctions and high distinctions in my criminology degree,” she says.

Her husband Jonathon, one of nine children who grew up in Redfern, says the scholarship was stabilising as it “took away a lot of the added pressures that come with being a university student”.

“I was very lucky as UNSW has a lot of support networks in place for Aboriginal people,” he says.

“The Nura Gili Centre [for Indigenous Programs] was a great help to make the transition easier.”

The 25-year-old says he was “always the kid who had enormous potential but didn’t necessary have the discipline or the drive to fulfil that potential”.

After high school, he had a gap year in the Army, “a place that I could go to get those fundamentals to be the leader that I wanted to be”, before doing a transition program at UNSW, and then a double degree in arts and law.

“If you’re looking at the Aboriginal community, there’s a lot of injustice that happens – social, political or institutional injustice,” he says.

“I think law is one of the few mechanisms that Aboriginal people have to address the injustice that happens out there in Aboriginal communities.”

Mr Captain-Webb now works at the NSW Aboriginal Land Council, where he is the design and implementation lead on the Western Sydney indigenous business and employment hub. The Commonwealth government initiative will see the hub become a one-stop shop for Indigenous businesses and Indigenous job seekers in western Sydney, but he hasn’t ruled out a future in politics. 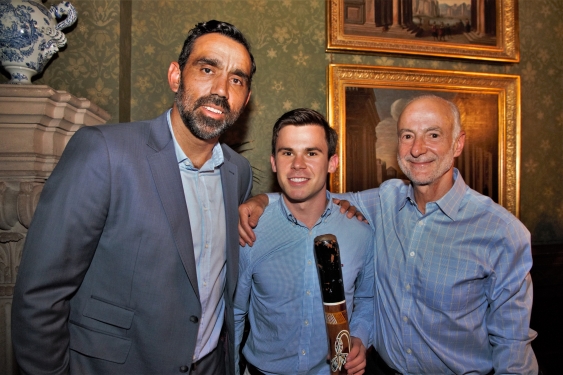 Steven Hobday (centre) with the 2014 Australian of the Year Adam Goodes and Shalom Gamarada director Dr Hilton Immerman OAM at a fundraising event for the Wolper Hospital Foundation.

“Politics is something that I’ve always loved,” he says. “It’s something that drew me to my current role at the NSW Aboriginal Land Council, being in an organisation that engages in the political process to create social, economic and cultural outcomes for Aboriginal people.”

Danielle’s brother Steven, 21, is also keen to help his community through a career in medicine.

“I’ve always known that Indigenous health is garbage, compared to the rest of the Australian population,” he says.

“So my ultimate goal is to work in the community, preferably in the Aboriginal Medical Service.”

Mr Hobday has served as a mentor on the Smith Family’s Indigenous Youth Leadership Program and will play the didgeridoo at the NSW Parliament House on August 7, in an event to mark nine years of the successful Shalom Gamarada scholarship program.

The two siblings aren’t the only two in the family to have connections with UNSW.

Mrs Captain-Webb’s older brother Scott (23) studied Criminology at UNSW while his younger brother Jake, who is in Year 11, is also hoping to study at UNSW.

Mrs Captain-Webb is now on maternity leave from Legal Aid, where she is in her first rotation of the Legal Aid graduate program in Crime – Local Court at Gosford, with her new son Djuralye (1 month).

Mrs Captain-Webb also has a son Tjandamurra (4), who she had when she was living at Shalom College, and a daughter Yulara (2).

Previously she worked as a civil lawyer at the Public Interest Advocacy Centre in the Indigenous Justice Program, which focused on Aboriginal communities “who were overpoliced”. 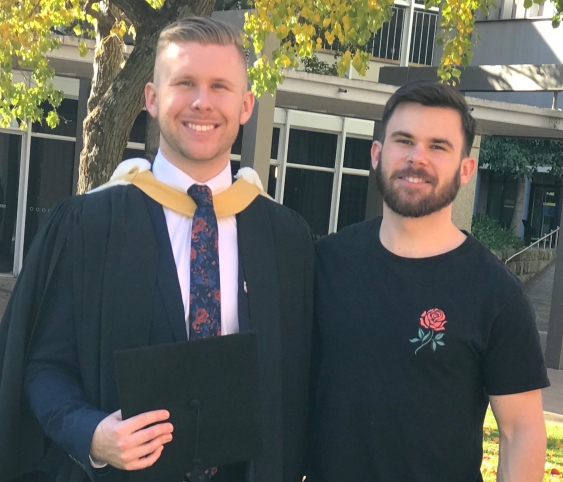 Scott Hobday (left) with his brother Steven, on Scott's graduation from the Bachelor of Criminology and Criminal Justice degree at UNSW.

“Issues I saw were human rights abuses, social injustices that young Aboriginal kids were having with the police, so police arresting them when they shouldn’t,” she says.

The lawyer initially wanted to study policing but says a law degree gave her more options “and would allow me to navigate the system and change it more successfully than it would as a police officer”.

“I think the biggest thing for me is seeing the amount of Aboriginal youth that are incarcerated and that’s always been a passion for me, trying to see if the incarceration rates of young Indigenous people can be reduced.”

The lawyer is also getting involved in policy, as a member of the NSW Law Societies Indigenous Issues Committee, “which advocates on legal policy and practice issues arising in relation to Indigenous people in NSW”.

Mrs Captain-Webb says her parents, who are farmers who left school midway through high school, are really proud of her and her brothers, who persevered and overcame their obstacles to their university education.

Her husband says they are role models who “have an obligation to the next generation of Aboriginal people coming through to set an amazing example and pass on any advice or help where necessary”.

“I think there is enormous opportunity out there for Aboriginal people and I think what our story can tell is that no matter where you are at or what background you come from, if you put your mind to it and you’re willing to take every opportunity that’s out there, you can strive to hit some of the goals that you have,” Mr Captain-Webb says.