Sculpture by the Sea: UNSW alumni and students featured in outdoor art display 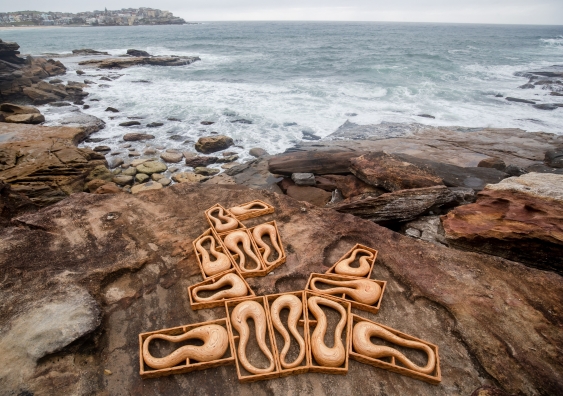 Layers by Charlie Trivers. Photo by C. Curd, courtesy of Sculpture by the Sea.

An enormous multi-coloured inflatable perched on a rooftop at Tamarama Beach, trash that serves as the canvas for stunning landscapes, and a giant propeller shaped out of sandstone are some of the works of art crafted by UNSW alumni – and one current student – for this year’s Sculpture by the Sea exhibit.

The world’s largest outdoor art exhibit is now open along a two kilometre stretch of coastline from Bondi to Tamarama featuring more than 100 sculptures by artists from Australia and across the world.

This year, the sculptural walk includes three alumni each from the Faculty of Built Environment and UNSW Art and Design, as well as a current Master of Fine Arts student. The exhibition runs until 4 November 2018. Here we learn more about the artists and their work:

Exhibiting in this year’s Sculpture by the Sea puts recent graduate Monique Bedwell about a decade ahead of her career plan.

Bedwell’s “But It’s Not My Rubbish” uses miscellaneous items of trash picked up off the street – from surfboards to metal garbage cans – and re-purposes them as canvasses for landscape paintings of the Sydney coastline.

"The waste produced by our consumeristic society is becoming a part of our everyday landscape," Bedwell said. 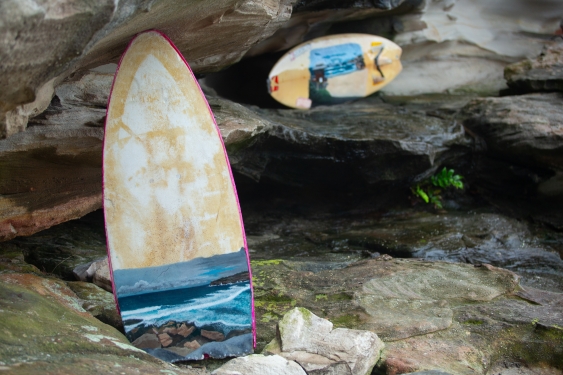 Monique Bedwell's But It's Not My Rubbish." Photo by Gareth Carr courtesy of Sculpture by the Sea.

Anne Levitch’s 'Turf Wars' is a commentary on borders and boundaries at a personal, community and global scale. The seven-piece puzzle made of artificial grass is designed for visitors to sit on, move around and interact with on the sand at Tamarama Beach.

"We all scrabble for our own piece of turf – a backyard, a patch we can call our own – but we are all part of a greater collective," said Levitch, who has participated in Sculpture by the Sea twice before. "All of the different pieces come together."

Levitch has taught in the Faculty of Built Environment at UNSW. This is her third Sculpture by the Sea. 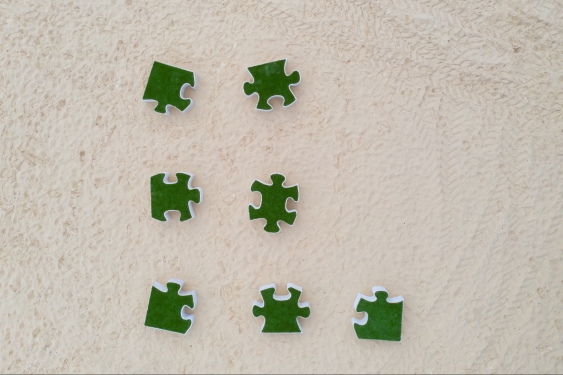 This year’s artwork is a continuation of Sheehan’s previous work at Sculpture by the Sea. While last year’s creation was designed to erode and weather with the elements, 'Inundation' is a collaborative work about rising ocean levels and the effects for communities and people of small island nations.

The series of 3D printed sculptures created with recycled water bottle filament fill with water as the tides rise and fall.

"This work is about inundation and the rising ocean levels, loss of land and how that affects everybody on the other side of the horizon from us," Sheehan said. "It does affect us, but there’s a whole other world over there that we don’t keep in our minds as often as we should. We look past them to other places." 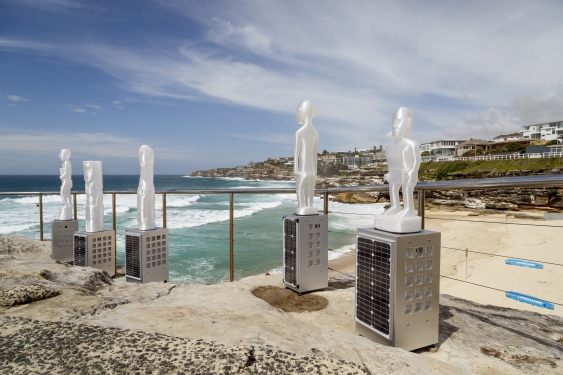 Inundation by Jeremy Sheehan. Photo by Jessica Wyld, courtesy Sculpture by the Sea.

The sandstone cliff faces and outcrops that dominate Sydney’s coastline from the Royal National Park to Bondi Beach inspired Trivers’ 11th Sculpture by the Sea submission. The organic loops of eco-plywood fit seamlessly into the surrounding landscape in his creation called 'Layers'.

The work is made of eco-plywood grown from sustainable forests in Australia. The pieces are held together using a bio-resin – a poxy-resin made of plant materials. The grid-like form is designed to emulate the naturally occurring cracks in the rocks and the iron in between.

"I am trying to push my idea as far as I can take it," Trivers said. "I haven’t taken ideas from anyone else, I have taken inspiration from nature. I don’t see anyone doing similar things to what I am doing." 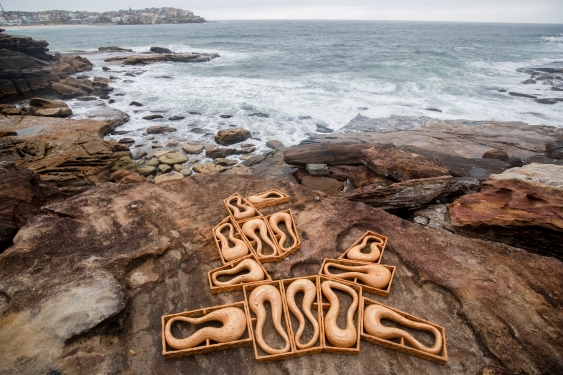 Layers by Charlies Trivers. Photo by C. Curd, courtesy Sculpture by the Sea.

The rigid lines of Australian architecture in the 1980s are a stark contrast to the lyrical sculptures Jim Flook is creating these days. For his first foray into the world’s largest public outdoor sculpture exhibit, Flook turned 35 lineal metres of steel into a calligraphic expression of life’s ups and downs.

"This is very curvaceous, like each of us has twists and turns in our own life," Flook said about the massive orange sculpture called 'Swerve'. "Sometimes you are going along really well and then suddenly Factor X comes in and there are twists and turns. Sometimes those twists and turns are a lot more dramatic than others." 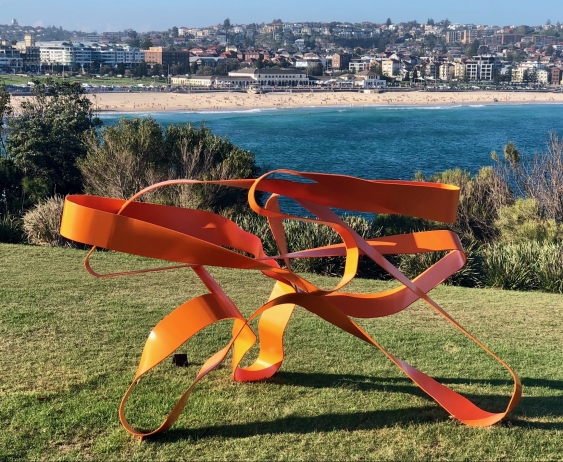 Swerve by Jim Flook. Photo courtesy Sculpture by the Sea

The creators of the giant inflatable that sits atop the kiosk at Tamarama Beach wanted to show visitors a different side of public art.

"We wanted to bring happy, joyous art to the public arena," said Maurice Goldberg, who spent hundreds of hours with his creative partner Matthew Abeline painting, printing and zipping the handmade fabrics for 'Microcosm'. "It’s a new direction to do something that is really happy because art can usually be very serious."

The inspiration for the art is serious – the destruction of coral reefs through activities including dynamite fishing.

"When we were scuba diving we saw all of this dead coral," Goldberg said. "Occasionally we would see areas of new coral and new fish. The regeneration and regrowth – the metamorphosis of nature at every level – fascinated us." 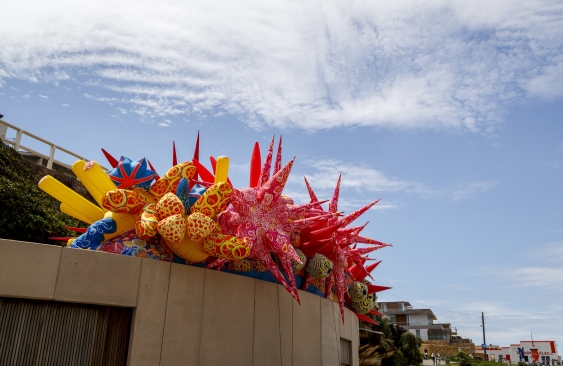 Microcosm by Maurice Goldberg and Matthew Aberline. Photo by Jessica Wyld, courtesy Sculpture by the Sea.

The sandstone cliffs of Bondi are an “underutilised gallery” says Sculpture by the Sea veteran Michael Purdy, who is participating in his 10th exhibit.

Purdy’s 3.4m tall propeller pushes the boundaries of sandstone – its slender shape and silky texture incongruous with the material that is typically used for buildings. Still, the structure called 'Spinning Slowly' is designed to blend in among the eroded cliffs of Bondi.

"I see the landscape as art itself," said Purdy. "I wanted to respond to the landscape. People recognise the beauty of the cliffs, the eroded sandstone, and the beautiful colours and patterns of the rock. We are reminded that this art is available every day of the year for those jogging and walking past." 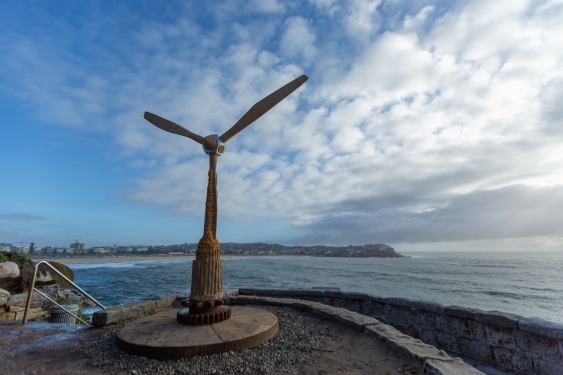 Spinning Slowly by Michael Purdy. Photo by Gareth Carr, courtesy of Sculpture by the Sea.