Vice-Chancellor Ian Jacobs on his ambitious agenda for UNSW and how a three decade–long love affair with Sydney helped bring him back to Australia. 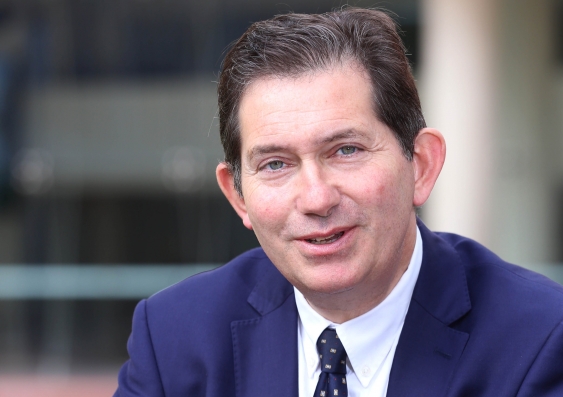 You were born and educated in the UK and built an outstanding career as a researcher and senior academic there. How difficult was it to up sticks and come to Australia?

Not at all! My wife, Chris, and I have wanted to live and work in Australia since we came here in our 20s. There’s actually quite a romantic story behind that. We weren’t married at that stage and Chris had taken off on a round-the-world trip. The minute she got on that plane I knew it was the worst thing that had happened to me. So I chased after her and caught up three months later in Sydney. I remember we stood at Circular Quay and promised ourselves we’d come back one day to work here. That was 30 years ago.

So when I was ready for a President/Vice-Chancellor job, among the approaches from recruitment agencies UNSW Australia stood out, and the more I discovered about this amazing University – impressive history and trajectory, wonderful campus and great people – in what I think is the best city in the world, it became an easy decision. When the moment arrived it was a bit harder than we had expected to move across the world – leaving behind our parents, our children (though they’re grown up), our close friends and our dog (who is with our parents). But they’re all planning visits (except the dog). There are of course some challenges, but now we are here, we know we made the right decision.

Your most recent position was as Vice-President and Dean at the University of Manchester. How would you compare UNSW and Manchester?

I have observed an exciting similarity. Manchester was the birthplace of the Industrial Revolution and despite the fact there’s been a lot of economic and social change, the entrepreneurial spirit still runs through the City of Manchester and its university. Here at UNSW, there is a similar pride in the fact that although UNSW is no longer young in years, it remains young in spirit – innovative and entrepreneurial, prepared to take on new challenges and break the mould. You could speak to many academics and other staff in Manchester and hear a similar ethos and approach. In addition, the campuses are remarkably similar in terms of size. Manchester has close to 40,000 students, the biggest in the UK, but not quite as big as UNSW. The scale of Australian universities is certainly different. In both cases there are a lot of students on campus and that creates a fantastic atmosphere.

The government is proposing to deregulate higher education in Australia. Universities in the UK have also faced major change. Are there lessons from the UK experience?

It’s interesting to arrive in Australia and find what was a fairly stable system is now also on the verge of radical change. But I don’t think too much should be extrapolated from the UK experience. While the government there withdrew almost all public funding for students, and fees have risen significantly, there is a cap, equivalent to around A$16,000. Despite the fact that all universities have gone to the cap, and there was an initial brief blip in student demand, the data is reassuring. There’s been no drop in student numbers. In fact demand has increased and, importantly, enrolment of students from low socioeconomic background has also gone up as a percentage of all student numbers.

Although there seem to be few if any alternatives to fee deregulation in Australia, there is real concern it might deter students from more disadvantaged backgrounds from going to university and I think we need to watch that very carefully. I’m a passionate believer in equality of access to higher education for all in society, regardless of ethnic group, Indigenous background or socio-economic group. I’m also concerned about students accumulating excessive debt that becomes a financial and psychological burden later in life.

A priority in your early days at UNSW has been an intense round of engagements with staff, as part of developing a 10-year strategic plan. What are your most vivid impressions?

I’m delighted that the three, high-level strategic priorities I’ve proposed – academic excellence in research and teaching, social engagement and global impact – really seem to resonate with staff. People here have a very strong sense of social responsibility, and embrace the idea of global impact, but realise we can’t achieve any of this unless we have academic excellence as the foundation.

I sense excitement about moving us up the international league tables, not for the sake of boasting about where we stand, but because our staff and students recognise the great universities in the world – the top 25 or 50 – have an enormous impact on society and humanity. There is a willingness among the UNSW community to be ruthlessly honest about what we need to do to improve our position – in terms of publication output, the number of highly cited publications, how we nurture and support existing staff and bring in new staff. I am also pleased with the response to the idea that UNSW should take the lead in introducing new technologies to improve the way we deliver our massive teaching load and improve quality of teaching, while enhancing assessment, monitoring, mentoring and feedback. All of this can help to personalise and enhance the student experience.

In terms of social engagement, we’ve set up a working group on gender equality. I’d like this University to be a leader on that. But it’s not just about gender: we’ll also be developing action plans for Indigenous groups, ethnic groups and low socio-economic groups.

There’s also been an enthusiastic response to ensuring that UNSW becomes a national and global forum for discussing, debating and developing policy on the grand challenges facing society. We need to choose areas where we have the most expertise. One obvious example is our fantastic research into renewable energies, but there are many others.

You’ve emphasised the role UNSW could play in the developing world. You established and still chair the Uganda Women’s Health Initiative. How has your work in Africa influenced your thinking?

I set up the initiative 10 years ago, bringing together academics and clinicians in Uganda and the UK to improve aspects of women’s health. It has included a range of projects including prevention of death from haemorrhage after childbirth, resuscitation of the newborn, palliative care, provision of medical equipment and building a radiotherapy facility and cancer screening. The focus now is on rolling out screening for cancer of the cervix – a completely preventable disease – to make it available to all women. I have had the privilege of visiting Uganda three or four times a year. It has been one of the most fulfilling things I’ve done in my career because our work has saved many lives. I know UNSW staff are doing important work in many parts of the developing world and I hope we can expand the impact. We are in the process of mapping activity so we can plan further developments. I want our links with Asia to be developed, but I would also like to see our partnerships extend into Africa. Africa is developing very quickly and there are great opportunities for us to be involved there and make a positive difference.

Finally, how would you sum up what you bring to UNSW and what you hope to achieve?

I am driven by a wish to use the privileges I have had in my education and career to make a positive difference to the lives of others. What I’ve always tried to do, whether as a clinician, researcher or in leadership, is to add value by bringing together talented people to set ambitious goals and achieve great things. UNSW is a top-quality institution, which has been run incredibly well and is on a great trajectory. Leading this organisation is a dream come true and an enormous opportunity. My hope is I can help accelerate UNSW’s trajectory and take it to the next level of academic performance so that it makes an even bigger contribution as one of the world’s great universities.