Commemorating events like Sorry Day is an important act of support for Indigenous Australians and demonstrates a genuine commitment to building community, a UNSW Sorry Day gathering has been told. 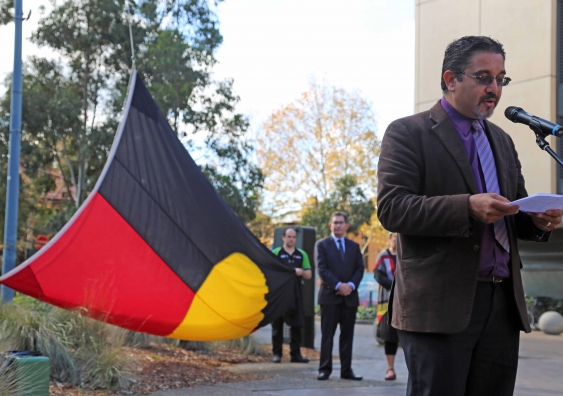 Commemorating events like Sorry Day is a symbolic but important act of support for Indigenous Australians and demonstrates a genuine commitment to building community and the nation, a Sorry Day gathering at UNSW has been told.

UNSW Associate Professor Reuben Bolt, a descendant of the Yuin/Wandandian and Ngarigo peoples, and Director of the Nura Gili Indigenous Programs Unit pointed to the importance of small but committed acts of genuine support for Aboriginal Australia in closing the gap ahead of the flag raising ceremony.

“So how do we garner support for genuine commitment? Well, we can start with the commemoration of significant events such as this," Professor Bolt said.

"This small gesture is so important to Indigenous peoples. Acknowledging the past is important. The collective experience that unites Indigenous people as a distinct people; a proud people; a sovereign people; a people determined to build a positive future. And it’s a future that ideally associates Indigenous Australians with success, rather than disadvantage or marginalisation. A future that includes a genuine commitment to moving forward together to build our community and to build our nation.

“Your attendance here today at this ‘sorry day’ event is an example of ‘genuine commitment’. It may be symbolic, and may not translate into improved health statistics, or improvements to other socio-economic indicators, however, it is a starting point. And, if we can harness the good will, close the ‘discrepancy gap’, and move forward with a genuine commitment, we will hopefully see some improvements,” Professor Bolt said.

The event, which was attended by UNSW staff and students, acknowledged the importance of Sorry Day 2017, which coincides with the 20th anniversary of the tabling in Federal Parliament of the Bringing Them Home report into the forced removal of Aboriginal and Torres Strait Islander children from their families.

UNSW Arts & Social Sciences Associate Professor Sue Green, a Wiradjuri woman who also spoke at the event, gave a powerful personal account of the impact of child removals – which are continuing at an alarming rate.

“The apology was wonderful, but do you apologise and keep doing the same thing?” Professor Green asked. “As people … who now share this country, we need collectively to take on the responsibility to say 'no more'. Each one of us needs to ask ourselves what are we doing, not to correct the injustice but to stop it.

“UNSW, as a place of learning and knowledge gathering, has a greater responsibility than most,” she said.

“We not only raise the next generation of leaders in this society, we also, at the very least, influence if not write the policies that go on to determine what occurs.

“I stand here today as a mother, as a grandmother, and hopefully will live long enough to see the great-grandchildren. I do not want them to know the trauma. I want them to live free of the fear of welfare, and I say that also as a social worker.

“Our children should know that they have not an equal place but a cherished place as the sovereign people of this nation,” she said.

President and Vice-Chancellor, Professor Ian Jacobs, reiterated the University’s strong commitment to Indigenous Australians and recognised that the land on which UNSW now sits had been a place of great learning for more than 8000 years.

“Gathered here, we are near to an 8000-year-old campsite – around which the Bedegal people taught their children about culture, history and subsistence. Here, we are the newcomers, and we have much to learn from, and about, those who came long before us," Professor Jacobs said.

“This precinct is, as it was long ago, a place for meeting, for teaching and learning, and sharing knowledge – and today, for expressing our profound sorrow at the wrongs inflicted on the original inhabitants of this land."

The Bringing Them Home report, which was tabled in Federal Parliament in 1997 was also the focus of a symposium held at UNSW, jointly organised by UNSW's Indigenous Law Centre and the University of Technology, Sydney (UTS).

Academics, advocates, policy makers and members of the Indigenous community reflected on the significance of the report, what has happened since it was tabled, and the current picture for the protection of Indigenous children.