Stalin, Trump, Gillard and me: maverick music lecturer on the world stage

UNSW academic and critically acclaimed pianist Dr Sonya Lifschitz will perform a unique multimedia composition in a series of prestigious performances in Europe. 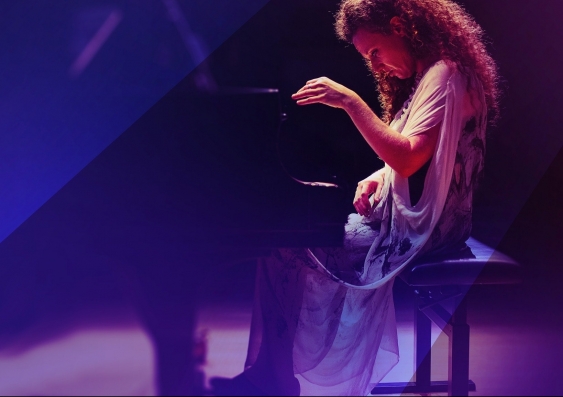 “Growing up, Yudina’s indomitable defiance, fierce commitment to her art, titanic personality and transcendent, inimitable piano playing was a huge inspiration to me,” Dr Lifschitz says. “When I suggested to [composer Robert Davidson] that we create a piece around Yudina’s story and weave a tapestry around it using material from other artists and politicians, a long and fruitful collaboration began.”

Stalin’s Piano was inspired by a story about Stalin and Yudina. One evening in 1944, Stalin heard Yudina play Mozart’s Piano Concerto No. 23 live on the radio. He liked it so much, he demanded a copy of the performance. Yudina was woken in the middle of the night so that the concerto could be recorded for the dictator, and Stalin sent her 20,000 rubles for her efforts.

Yudina, a devout Christian, wrote to Stalin thanking him for the gift and, in defiance of the state-imposed atheism, told him she donated the money to a church. Remarkably, the dictator put the letter aside and said nothing. It’s been reported that, nine years later, Yudina’s recording was playing in his room as the leader lay on his deathbed.

“Stalin’s Piano explores many themes including humour, tragedy, tender-heartedness, devastation and transformation,” Dr Lifschitz says. “It highlights the overlap and juxtapositions between artists and politicians.”

Dr Lifschitz will perform the work during a highly sought-after showcase at Classical:NEXT in Rotterdam. The event is the world’s largest annual gathering of artistic directors, concert bookers, journalists, performers and composers. Dr Lifschitz is one of three Australians performing there.

“It’s an incredible opportunity to present new Australian work to international audiences. Stalin’s Piano speaks to many current global issues, such as gender inequality, nuclear threat, redemption through nature and the transformative power of art, and I think it will translate beautifully onto international contexts.”

She says Classical:NEXT is a wonderful opportunity to take part in important conversations shaping the future of art music, “a subject I am very passionate about”.

The artist is also performing at the Sound Unbound festival at The Barbican in London. The festival features a big line-up of artists who blur the boundaries between classical and contemporary, experimental and jazz. Nick Cave, Herbie Hancock, Philip Glass, Saint Etienne and the London Symphony Orchestra will also perform at the festival.

“I would say it’s probably the most prestigious venue for contemporary art music in the world,” Dr Lifschitz says. “It’s every musician’s dream to perform there.”

The musician will also travel to Venice to see her contribution to the Venice Biennale. Dr Lifschitz is featured performing a musical adaptation of a David Malouf poem at Canberra’s Old Parliament House in ASSEMBLY, a video installation by UNSW Art & Design alumna Angelica Mesiti, Australia’s representative at the Biennale.

“This was one of the most unique projects I’ve had the privilege of working on,” Dr Lifschitz says. “I was completely captivated by Angelica’s vision for this work and the philosophical, poetic and aesthetic scope of it.”

Dr Lifschitz made her debut with the Melbourne Symphony Orchestra at age 18. Since then, she has carved a diverse career spanning solo performance, collaborations across film, animation, spoken word, visual and performance art, radio broadcasting, education and arts advocacy.

She now teaches the next generation of performers at UNSW to also push the boundaries of performance. Dr Lifschitz coordinates the Music Creative Practice stream, where she says she is hoping to “create a major cultural shift”.

“I teach creativity and performance-making and I get students to conceptualise and devise original projects … I keep telling them that performing is not just learning your notes and getting up and playing your pieces. It’s actually curating an experience for your audience, it’s a social responsibility.”

Dr Lifschitz encourages students to take full ownership of every aspect of performance, such as creative programming, staging and lighting design, presentation, communication and concept when considering their performance projects.

“They really learn the skills they need to survive in the increasingly complex, challenging and rapidly changing reality of the music industry out there … you have to be a visionary and a maverick to carve and forge a niche for yourself.”