Steve Pinker on why the world is (still) not falling apart

In this public talk six years after the publication of his bestselling book, scientist Steven Pinker returns to the topic of violence to examine why people mistakenly believe the world is becoming a more dangerous place. 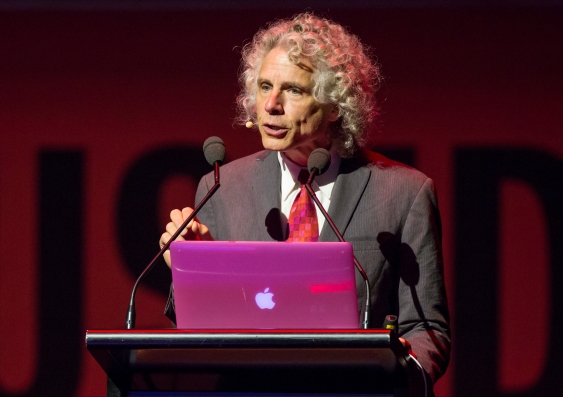 Turn on the news and you could be forgiven for thinking we are living through one of the most violent periods of human history. Cognitive scientist Dr Steven Pinker has spent the better part of the last decade arguing that the reverse is true.

The University of New South Wales (UNSW Sydney) and the Sydney Opera House are proud to present The New York Times bestselling author in a public talk in Sydney on Sunday 25 June on The Decline of Violence: Why the world isn’t falling apart. The event will be chaired by Natasha Mitchell, multi-award winning ABC broadcaster and journalist, and host of the new podcast Science Friction.

In 2011, Dr Pinker published his landmark historical account, The Better Angels of Our Nature. Combing through data from pre-history to the beginning of the 21st century, his magisterial 800-page analysis identified a decline in conflict and violence over time. In fact, we may be living in the most peaceful time in our species’ existence, according to the experimental psychologist and Harvard University Johnstone Family Professor of Psychology.

Better Angels argued that the spread of government, literacy, trade, and cosmopolitanism have helped steer human beings away from the ‘inner demons’ that incline them toward violence; leading to increasingly controlled baser impulses, encouraging empathy with others, bargaining rather than plundering, and debunking toxic ideologies.

Does that theory hold in 2017? And if so, why do so many people think that the world is more dangerous than ever?

The Acting Director of Performing Arts (SOHP) at the Sydney Opera House, Alison Nadebaum, says: “Steven Pinker’s work ranges from evolutionary psychology to the history of violence. He is one of the world’s great communicators on these complex and fascinating issues as he showed us at the Festival of Dangerous Ideas in 2014. We look forward to welcoming him back to the Sydney Opera House.”

UNSW is championing the critical role of universities in leading open and informed debates, to help shape policy and research which will meet the challenges of the 21st Century.

President and Vice-Chancellor Professor Ian Jacobs described Dr Pinker as one of the world’s most influential thinkers: “His theories on language and evolutionary psychology have had a big impact on the way we look at our social interactions, the nature of memory, of language and of violence. At a time when the role of science in society is being hotly debated, and scientific inquiry itself is under scrutiny, Steven’s talk is timely and his views are sure to be both riveting and provocative. I am delighted that UNSW is partnering with the Sydney Opera House on this event.”

About Steven Pinker:  An experimental psychologist and one of the world’s foremost writers on language, mind, and human nature, Dr Pinker is currently Johnstone Family Professor of Psychology at Harvard University. His research on vision, language and social relations has won prizes from the National Academy of Sciences, the Royal Institution of Great Britain, the Cognitive Neuroscience Society, and the American Psychological Association. His books include The Language Instinct, How the Mind Works, The Blank Slate, and The Better Angels of Our Nature. He is Chair of the Usage Panel of the American Heritage Dictionary and often writes for The New York Times, Time, and other publications. He has been named Humanist of the Year, Prospect magazine’s “The World’s Top 100 Public Intellectuals,” Foreign Policy’s “100 Global Thinkers,” and Time magazine’s “The 100 Most Influential People in the World Today.”
Twitter Facebook LinkedIn