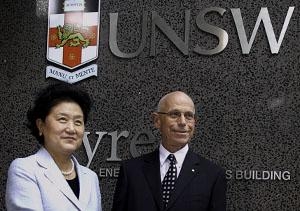 Hosted by UNSW International, Madam Liu’s visit aimed to strengthen UNSW’s strategic partnership with China in the areas of education, science and technology.

The Councillor commended UNSW on its commitment to exchanges with China, and the University’s high enrolments of Chinese students. Madam Liu toured the Tyree Energy Technologies Building, UNSW’s centre for energy research.

“Just now, in your laboratories, we saw many Chinese students and I know that many have gone on to become excellent scientists, engineers, and businessmen who have played an important role in bringing our two countries closer together,” she said.

“UNSW is the first stop of my visit to Australia, this shows the importance of the contributions made by this university to the cooperation between our two countries.”

UNSW is home to more than 5,700 Chinese students across a range of disciplines spanning undergraduate, postgraduate and a growing number of higher degree enrolments.

“While student recruitment is the foundation of everything we do, UNSW’s engagement with China is increasingly about so much more,” said the Vice-Chancellor, Professor Fred Hilmer who hosted Madam Liu’s tour of the Tyree Energy Technologies Building.

“With China’s emerging position as the world’s largest investor in research and development and UNSW’s role as a research-intensive university with a track record of strong industry linkages, we are well positioned to forge new strategic partnerships and alliances throughout Greater China.”

"The visit points to a future bilateral relationship increasingly driven by innovation, education and new partnerships between the higher education sector and industry," said UNSW’s recently appointed Director of China Strategy and Development and Director of the Confucius Institute, Laurie Pearcey, who interpreted for the Vice-Chancellor.

Madam Liu was accompanied by a senior delegation including the Chinese Minister for Education Yuan Guiren and Vice-Minister of Science & Technology Wang Zhigang.

Read Laurie Pearcey’s analysis of the China-Australia anniversary in The Conversation.