Delivering this year’s UNSW Gandhi Oration, social researcher Hugh Mackay outlined how small actions as simple as saying hello with a smile can have a powerful impact on the national mood. 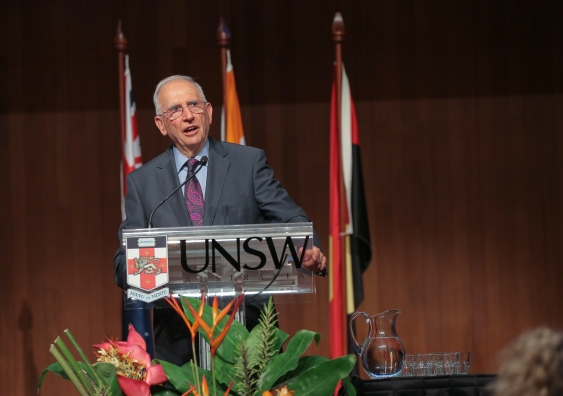 Actions as simple as smiling and saying hello to someone in the supermarket check-out queue can have a powerful influence on communities, according to social researcher Dr Hugh Mackay.

“You think people aren’t as friendly as they once were? You think there’s an avoidance of eye contact when you’re walking along the street in a city like Sydney? Well, be more friendly,” Dr Mackay told the audience in UNSW’s Clancy Auditorium for the Gandhi Oration on Monday.

“Start making eye contact. Do better than that – start smiling and actually saying hello to people at the bus stop, in the lift, in the check-out queue and especially in the street or the apartment where you live.”

The very act of engaging with others, and being alert to the possibility that someone needs your help or attention, would help to determine the big picture, he said. 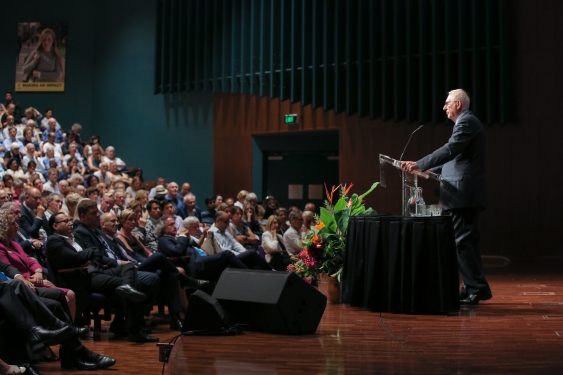 Sponsored by Tata Consultancy Services, the annual Gandhi Oration commemorates India’s Martyrs’ Day, the anniversary of Mahatma Gandhi’s assassination on 30 January 1948, and is delivered by a person whose life work exemplifies Gandhian ideals.

Dr Mackay has had a 60-year career in social research. For 25 years he produced a social research quarterly called “The Mackay Report” that told us who we are, what we think and why we behave the way we do. He was one of the founders of The St James Ethics Centre and is currently a patron of the Asylum Seekers Centre and an honorary professor at Charles Sturt and Wollongong universities.

Speaking on the topic “The state of the nation starts in your street”, Dr Mackay outlined how Australians are in the grip of anxiety and depression, concerned about the state of contemporary Australia and feeling powerless in the face of events here and overseas.

Rising income inequality, declining respect for institutions and those who lead them, the rate of technological change, the loneliness born of shrinking households, the scramble for privacy and security in high-rise living, and the isolation wrought by our reliance on electronic communication all exerted great pressure on the stability and cohesiveness of communities, Dr Mackay said.

As a result, “we are showing signs of a disturbing retreat from the values we were once famous for”.

But rather than relying on leaders, who many had lost faith in and no longer trusted, it was up to individuals to engage with the life of the local community and become good neighbours. 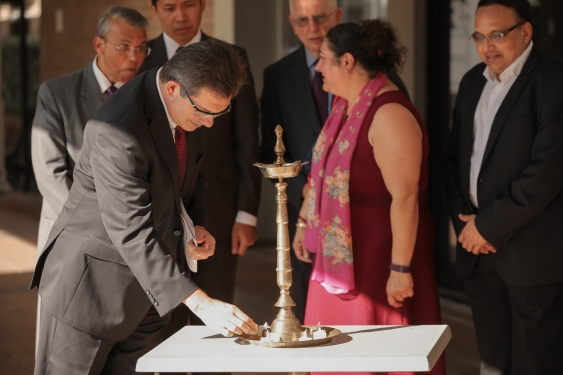 “We can have a powerful influence on the communities we belong to,” he said. “How we contribute to these miniatures will help to determine the big picture.”

On financial worries: “We can’t manage the economy but we can decide to spend and save wisely (and) to be more generous to the needy.”

On technology: “We can be its masters, not its servants.” 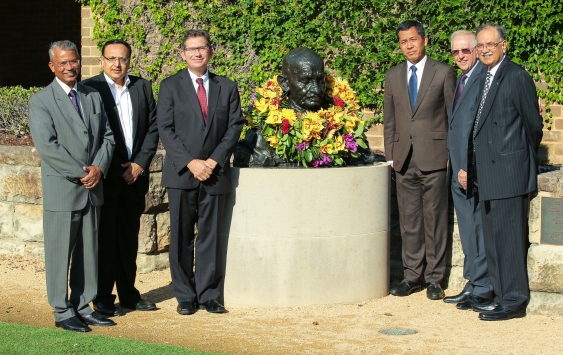 On forgiveness: “Abandon the primitive notion of revenge. It’s a way of bringing us both down to the same level of bad behaviour … the only proper response it to forgive. That’s how we build a responsible society.”

And on the ‘happiness industry’: “If you pursue happiness, it will elude you … each of us has a full spectrum of emotion depending on what life throws at us. Every band of the emotional spectrum is as valid as every other band because they all teach us what it is to be human.”

The Oration was preceded by a Remembrance Ceremony on the UNSW Library Lawn. The ceremony included the lighting of a ceremonial lamp, the singing of two hymns and a minute’s silence before dignitaries placed floral tributes on the bust of Mahatma Gandhi.

Ms Karen Iles, Head of Corporate Social Responsibility, Tata Consultancy Services Australia and New Zealand, said the company was proud of its multi-year partnership of the Gandhi Oration, "a forum where the sharing and dialogue of key topics helps inspire positive social change and community empowerment".

"Hugh Mackay's delivery of the 2017 Gandhi Oration can help expand the national dialogue about the type of Australia we want to live in; a community characterised by connectedness and compassion – a continuation of the conversation sparked by Mahatma Gandhi," she said.

A nation in the grip of anxiety

The state of the nation starts in your street