A unique three-way partnership between UNSW, industry and the CSIRO will link high-performing early career researchers and industry, with tangible benefits to the national economy, writes Laura Poole-Warren. 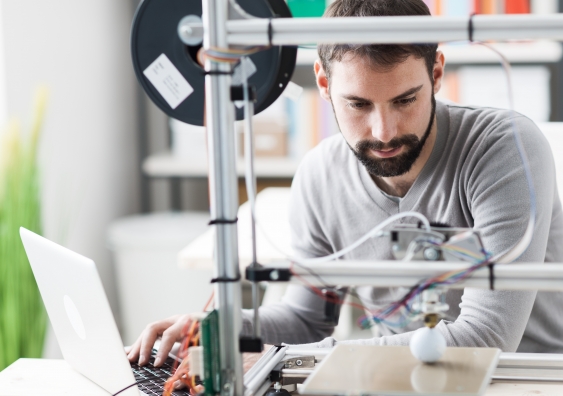 The iPhD program... building the all important bridges between discovery and its commercial applications. Photo: Shutterstock

OPINION: We often hear Australia punches above its weight in R&D and, in many areas, we do. But, if we really want to shine in comparison with our OECD peers, in an intensely competitive global economy, we can and must do even better.

The answer lies in people. As successive Federal Governments have pointed out, Australia’s otherwise competitive performance in research and development is hampered by a persistent disconnect between our universities and our industries and businesses. That is, we have failed to build that all important bridge between discovery and its commercial applications, leaving far too many synergistic partnerships, and their economic benefits, unrealised.

Consequently, despite healthy numbers of patents and publications, Australia has long been ranked well below average on the OECD scale for industry-university collaboration.

But, isn’t Australian ingenuity and innovation transforming lives, regardless? Well-known Australian inventions like wifi, the Cochlear bionic ear and Gardisal, the cervical cancer vaccine, are often held up as evidence of our success. Likewise, a major 2015 study by Deloitte Access Economics, concluded that the new knowledge and technologies generated by the nation’s university sector contributed some $160 billion to the national economy in 2014. That’s about 10% of GDP or the equivalent of a return of between $5 and $10 on every dollar invested in university research.

That might sound impressive. Such achievements, however, are often due to the tremendous efforts of those trail-blazers who have found their own way across the critical university-industry divide; in many cases individual researchers knocking on the doors of industries and businesses, and vice a versa.

Every personal interaction across the university-industry divide is a critical step towards generational cultural change – and securing Australia’s all-important innovation pipeline.

How do we now build a stable, permanent link that emulates the unbroken pathway from discovery to application enjoyed by so many of our OECD peers?

Last year’s Review of Australia’s Research Training System rightly recommended Australia aspire to a place in the top 25% of the OECD for industry-university collaboration and noted research training has a crucial role to play. This goes back to people.

In the next few weeks, CSIRO in collaboration with UNSW Sydney will be advertising for applications for a joint pilot PhD program that takes an entirely new approach in pursuit of this goal. The CSIRO initiated iPhD represent a unique three-way partnership. The program brings together the university, industry partners and the CSIRO to jointly train new researchers to solve real world challenges that generate tangible benefits for industry, and consequently the national economy.

While the core of the program remains devoted to high quality research and ensuring research excellence, a professional development component is personalised to meet the needs of each individual PhD candidate, with significant input from both the CSIRO and business partners. As such, this bespoke approach adds significant value for research student while perfectly fitting the needs of business.

On a practical level, the iPhD program links high performing early career researchers with industry to solve immediate problems. For example, in my own field of biomedical engineering, we know the electrical properties of electrodes change when they are implanted into the human body. Why this occurs is a fundamental research question; exactly the kind of new knowledge universities are tasked with pursuing. But, it is also a critical challenge for the rapidly growing global medical devices industry, and its Australian leaders like Cochlear and their bionic ear.

The aim of the iPhD program is to identify and foster such synergies of purpose, by bringing our research skills into industry. At a deeper level, however, we are seeking to drive a profound cultural change.

In Australia, universities and industries and businesses currently operate mostly within our own distinct and separate spheres. Superficially, at least, our missions are both distinct and different.  The raison d’etre of industries and businesses is the generation of profits and shareholder returns. By contrast, Australian universities are publicly funded not-for-profit organisations committed to generating rigorous, evidence-based insights into our complex world for the common good. Yet, the impact of university research depends on its application and use in the real world. And, to generate ongoing profits and shareholder returns, business and industries need access new knowledge and innovative thinking. To benefit each other we need close, productive links.

We believe the starting point is something as basic as learning how to speak each other’s language. To do this, we need to work at the people to people level, within each other’s offices and labs. iPhD candidates will work for at least six months within an industry or business, collaborating with that partner to understand and solve an industry challenge. They will also have access to a structured program of industry-relevant courses, including leadership, entrepreneurship and innovation. As our students learn to speak the language of their industry partner they’ll be significantly boosting their employability.

We also need new structures that both help us identify mutually beneficial goals and facilitate long-term mutually beneficial interaction. Through the iPhD and similar programs, we believe those researchers we place within industry, and their industry mentors, will become the first of a new generation of bridge builders.

That CSIRO is partnering with UNSW to make this happen is important. Australia’s national science organisation is already well advanced in bridging the gap between research and its commercial application. CSIRO brings national research infrastructure, a large team of researchers and its wide network of industry partners to the program, as well as its record of success in generating external research funding. This informs its professional training courses, which will be incorporated into the iPhD program.

From an economic perspective, there is good international evidence to suggest research-industry collaboration drives innovation which, in turn, drives economic growth and secures longer term prosperity. The iPhD is, of course, just one model. But, every personal interaction across the university-industry divide is a critical step towards generational cultural change – and securing Australia’s all-important innovation pipeline.