When Deniz Kayis starts her combined Engineering/Law degree at UNSW this year, she will join a small but growing band of women choosing Engineering as a career path. 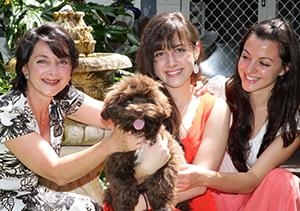 Keeping it in the family... Deniz Kayis (centre), with her mother Assoc/Prof Berman Kayis (left) and sister Ann

When Deniz Kayis starts her combined Engineering/Law degree at UNSW this year, she will join a small but growing band of women choosing Engineering as a career path.

The 18-year-old Sydney Girls' High graduate was one of 7,800 students offered a place in UNSW courses in the main round of university offers.

She was also one of more than 40 high achievers scoring 99.9 or above to be given a $10,000-a-year UNSW Scientia Scholarship.

Pro-Vice Chancellor (Students) Professor Wai-Fong Chua said UNSW has increased its attraction for school leavers of the highest academic achievement. It had received the highest number of first preferences from the “Top 500” group of students with more than 46per cent of them choosing a program at UNSW. In addition, UNSW had topped the state in terms of the average ATAR of the students who had been made offers.

The largest numbers of offers were made to potential students in Arts and Social Sciences, Science, and Engineering, with the Bachelor of Commerce being the biggest single program.

Increased demand for science and engineering qualifications was particularly striking this year.

“It’s particularly pleasing to see we are continuing a steady increase in the number of students attracted to science, which had been struggling nationally in recent years. Compared to last year, we have increased offers to Advanced Science by over 20 percent,” Professor Chua said.

Deniz’s decision to accept the UNSW offer continues a family tradition. Her mother Berman Kayis is an Associate Professor in the School of Mechanical and Manufacturing Engineering, while her sister Ann has just enrolled in a PhD with the Australian School of Business after completing a combined Commerce/Law degree at UNSW.

“UNSW is a great uni. Both my mother and my sister are there so I know I’ve made the right choice,” she says. “The combined degree also gives me flexibility and options later on.

“If I decide to go down the research path I can choose something that encompasses both – maybe legal issues in engineering or if I’m working in corporate law, having a background in engineering can help there too.”

According to a 2012 Engineers Australia report, female students comprised only 15.8 per cent of commencements in tertiary engineering programs across Australian universities in 2010.

UNSW’s engineering faculty wants to boost female enrolments to 25 per cent by 2020 or sooner.