Transformers in higher ed and health headline PLuS Alliance symposium

How will digital technology impact on future health care and universities? Two global leaders in their fields signal revolutionary changes are on the way. 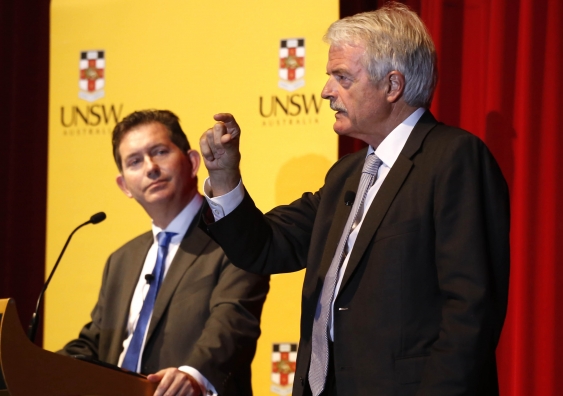 How will digital technology impact on future health care and universities? Two global leaders in their fields signal revolutionary changes are on the way.

The PLuS Alliance brings together UNSW, ASU and King’s College London in an international partnership to help find research-led solutions to global challenges and expand access to world-class learning. Use of innovative technologies will play a key role in achieving these goals.

Sir Malcolm oversees a massive system that delivers health care to 55 million people. Yet across the globe, he told the symposium, health care remains a cottage industry. “It’s poorly joined up. Almost universally, it’s failed to take advantage of digitisation, which has transformed almost every other industry on the planet. Where might medicine go,” he asked, “if technology was to take root in the health care industry?”

The answer, Sir Malcom hopes, will be found in the NHS’s vast 100,000 Whole Genome sequencing project, which is focusing initially on rare disease and cancer genomics, taking samples from patients at 13 NHS centres across England. It’s a five-year enterprise, due for completion in 2018. The benefits, he said, could be enormous.

“If the concept is right, we may be able to detect cancers in people before there are any symptoms at all. That is where technology completely starts to transform health care. Using genomics, will could tailor treatment such as chemotherapy to individual patients, and use the data to create a model that’s less about illness and more about health.”

The benefits are also financial. The cost of diagnosis will fall substantially, he predicted, as whole genome sequencing moves beyond treatment of cancer and rare diseases and into general health care. “New technologies that previously needed an entire room in a hospital that can now be provided in a GP surgery or even at the bedside, shifting patient care back into the community. We’ll shift more care out of hospitals into lower-cost environments.”

In higher education too, digital technologies are overturning tradition. Professor Michael Crow from ASU has gained worldwide attention (and a degree of notoriety) with a book he co-wrote with William Dabars, ‘Designing the New American University’, which proposes a radical rethink of the role of universities in 21st century society, with digital technology at their core.

“Universities are creatures capable of evolution,” Professor Crow told the symposium. “They’re involved in a very significant evolutionary force yet they’re mostly ignorant of those processes. They’re slow thinking. Their attitude is, ‘If we can be as good as Harvard, Berkeley, Princeton – what else is there to achieve?’ The question they need to ask is, ‘Are you frozen in time, staying as you are – or are you evolving and adapting?’” 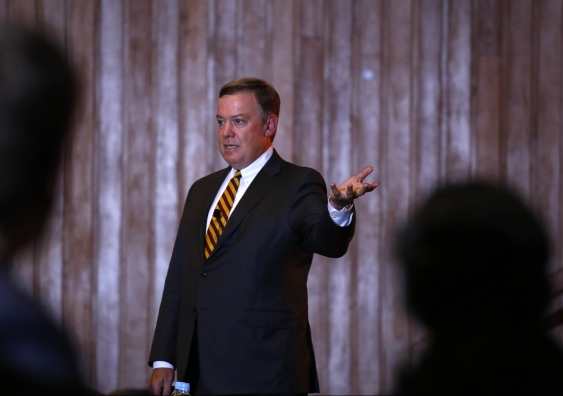 Professor Crow said his institution, UNSW and King’s College London are all embracing digital technologies that will have deep social impact. “At ASU,” he added, “technology is our special friend”, enabling radical transformation of learning for the university’s 72,000 students, and its ability to reach out to the wider community. “Too often, universities define excellence by how many students they do not admit. It’s about exclusion rather than inclusion. At ASU, we judge ourselves by who we include and how well they succeed.”

As an example, he said, ASU’s innovative online Global Freshman Academy has attracted 200,000 students in 186 countries since August 2015. “We’ve put together some fantastic courses in English, college algebra, astronomy, a great way to experience a college freshman year. Maybe you’re only 15 and thinking about going to university, or maybe you’re from a poor family somewhere. Online courses provide ‘whatever you need, when and how you need it’ learning.”

Professor Crow said the journey into digital learning was in its early stages. “We don’t even know what we’re doing yet. But we’ve learned this much – that there are different types of learners. And we’re altering the idea of the university to match the knowledge we have.”

LISTEN to an interview with Professor Crow on ABC RN Breakfast.

ASPIRE schools project in the running for a $500,000 Google grant