UNSW is saddened to hear of the death of Nelson Mandela, a leader who “touched lives around the world and inspired nations”. Andrea Durbach reflects 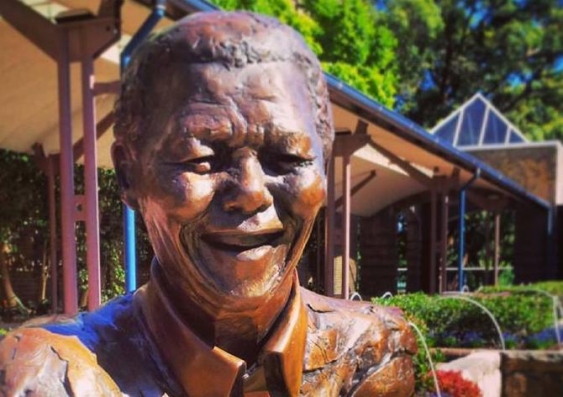 UNSW is saddened to hear of the death of Nelson Mandela, a leader who “touched lives around the world and inspired nations”.

The University is home to the Nelson Mandela bust, commissioned as a permanent tribute to the anti-apartheid leader and Nobel Peace Prize winner.

The bust is part of an ongoing project to honour the world’s most inspiring leaders. It sits alongside a bust of Mahatma Gandhi on the University’s Library Lawn.

Vice-Chancellor Professor Fred Hilmer said the University was proud to acknowledge and celebrate the legacy of South Africa's first black President known as Madiba, or “Father” by his people.

“There’s a special class of leader, a global leader, whose influence extends beyond a nation,” he said at the unveilling.

“Such a leader is Nelson Mandela. His courage and his leadership of the South African nation in the face of suffering and extreme hardship have been an inspiration around the world.”

“The Library Lawn is full of students and their families who are all taking photos with the Mandela bust and pausing to reflect on his amazing legacy.”

University leaders this morning laid flowers around the bust together with tributes, including from UNSW Chancellor David Gonski: "In appreciation of your inspiring leadership".

“The most important legacy he leaves behind is his books, his teachings and his statement from the dock.”

Professor Durbach says an example is an address given by Mandela at the 90th birthday celebrations for fellow anti-apartheid activist Walter Sisulu: In it he says: “What counts in life is not the mere fact that we have lived. It is what difference we have made to the lives of others that will determine the significance of the life we lead".

“It is sentiments like these that will be the true legacy that will continue to inspire law students and legal academics around the world,” says Professor Durbach, who spoke to ABC's 730 program.

Her Excellency Ms Koleka Mqulwana, High Commissioner for the Republic of South Africa in Australia, unveiling the Nelson Mandela Bust at the 2013 Wallace Wurth Lecture.