An unlimited passion for equality for sport coaches

UNSW’s Dr Nicholas Apoifis is one of the co-founders of Coaching Unlimited, a program that aims to address a lack of sports coaching opportunities for Aboriginal and Torres Strait Islander people. 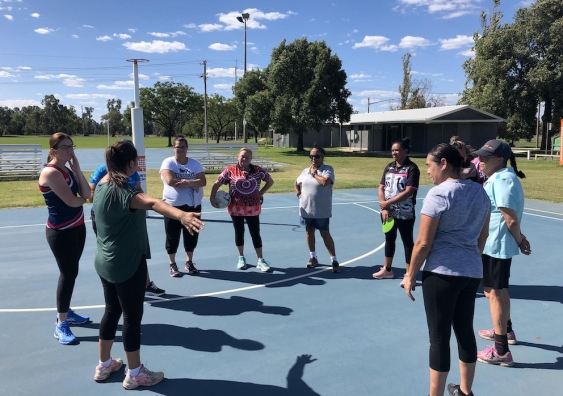 A highly ambitious program that is changing the face of communities started with one simple question: why are there so few Aboriginal and Torres Strait Islander sports coaches at the elite level? Considering the strong representation of these groups within elite athlete programs, it was puzzling to the researchers investigating.

Senior lecturer at UNSW’s School of Social Sciences, Dr Nicholas Apoifis, is one of the program’s founding researchers, along with colleagues from Western Sydney University and Macquarie University, and was surprised to discover that there was a huge literature gap in this field.

“We did a literature review of every article that had ever been written on Aboriginal people and coaching in the world, in all languages, all Indigenous populations, and we found zero articles in total,” he said.

“So theoretically no one had engaged with that space.”

While research was an important element in closing this particular gap, Dr Apoifis and his colleagues were also interested in the stories of the people who this affected most. They embarked on a 28-person interview of Aboriginal coaches from community, semi-professional and just below elite level and uncovered their stories.

“The way in which colonisation works is that we focus on people as the other,” he said.

“The colonised, as physical capital, denying them the mental acumen. And we think that played into the narratives that informed the fact that some of our coaches who were super elite, had represented Australia at the highest level, had their top coaching licenses, were getting denied jobs at that last step.

“And always being told to be the assistant coach. ‘We want you, we respect you, we like what you're doing. But essentially we can't have you as the face, the head coach.’”

From there Dr Apoifis and his team realised that there was an opportunity and a responsibility to take action and work with the communities to play their part in solving this problem.

“We found in the interviews this theme kept coming up with people saying in order to get more coaches, we obviously need more people to be accredited,” he said.

“But at the same time, it needs to be done in a culturally appropriate space.”

After discussions with a variety of sports one of Coaching Unlimited’s Aboriginal collaborators, Marcia Ella-Duncan, helped the program find its home in netball.

“We went and researched how to devise a program, we got lots of input from different people really did a proper engagement with community and came up with this idea of asking sporting associations to halve the time of the accreditation,” Dr Apoifis said.

“Because we can't just deliver a six-hour accreditation course – from what we learned about what the coaches are doing in the interviews, they're leaders, they're mentors, they play a huge role in their community.”

What they ended up with was a three-hour accreditation course, followed by three modules that could be selected by each community – the most popular of which have been nutrition, mental health and Indigenous games.

Being involved in the courses has been a special experience for Dr Apoifis and he is inspired by the work the participants do in their communities.

“It's just using this amazing pre-existing network, pumping institutional privileges into it, getting capital and money to fund this and providing a free coaching accreditation day for people that are just killing it already,” he said.

“The way in which the coaches are fascinated by the nutritional stuff in particular has been awesome. These are people that want to change lives and be good role models. So they’re asking what does a kid eat before training, after training?”

As to where the program goes in the future, Dr Apoifis believes it has the potential to do much more. However, their most pressing issue is funding. And while they are strongly focussing on the community level, there is always a look to the elite and when and how things are likely to change.

“There's a lot of hope in the interviews, particularly because we've got a lot more Aboriginal people in captaining positions,” he said.

“We’re seeing the way in which settler-Indigenous relationships have changed over time, and the institutionalised overt racism that occurred for the older cohort, for many, not all of the younger generation of coaches, the experiences aren't as acute.

“That's not in any way diminishing the fact that racism is extremely prevalent, and horrible and discriminatory. But there's something going on in the changing attitudes, as more Aboriginal people are in community coaching roles, having more of a voice.

“Racist institutions are going to resist as much as they can. But something's happening. Something's changing.”