President and Vice-Chancellor Ian Jacobs has led a UNSW delegation to Uganda to explore collaboration with one of Africa’s newest universities. 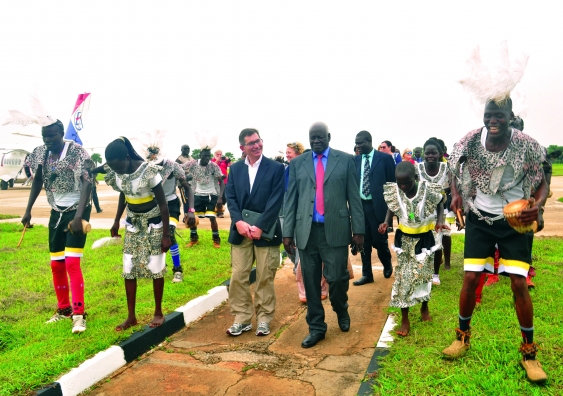 Professor Ian Jacobs is no stranger to Uganda – since 2005, he has visited the East African nation around 20 times, working with local colleagues on the Uganda Women’s Health Initiative, which he helped develop as a medical researcher in the decade before taking up his role as President and Vice-Chancellor at UNSW. The Initiative has seen positive results in preventing obstetric and neonatal complications, and provides palliative care for patients and screening for cancer of the cervix and breast cancer.

Professor Jacob’s latest trip, with a delegation from UNSW, had a broader objective: to launch a long-term relationship between UNSW and Gulu University, in Uganda’s far north. The visit also saw UNSW offering support for Uganda’s first undergraduate optometry degree program at Makarere University in Kampala. Uganda is one of three target zones, along with Myanmar and the South Pacific, where UNSW aims to improve the lives of one million people by 2025.

The program, driven by UNSW’s Institute for Global Development, is built on 250 projects that UNSW researchers have taken forward around the world in public health care, climate science, energy and water, AIDS/HIV, post conflict trauma, migration and other fields. UNSW’s strengths in sustainability, engineering and science, sexual and reproductive health, maternal health, and security are also of key value in developing countries.

Speaking at the conference ‘Gulu - Creating Uganda’s Leading Sustainable City’ on 6 August, Professor Jacobs noted that even though the two universities were separated by a vast distance they shared a common goal - to create a better world.

Gulu is 340 kilometres north of the capital Kampala, in a region disrupted until recently by years of conflict. Since it began classes in 2002, Gulu University has produced several thousand graduates, including about 40 medical doctors a year. Professor Jacobs noted it was already a major driver of expertise in the region, generating knowledge applicable to local problems – as well as providing regional perspectives on vital national issues. “I was excited to hear that Gulu University is also facilitating new higher education colleges in the region and spreading its impact,” he said.

Professor Jacobs noted the proposed collaboration with UNSW would see development programs for Gulu University academic staff, and visiting research fellowships (in both directions) in areas of shared interest such as mental health, justice, renewable energy, and infectious diseases. There will also be staff training in library services, research infrastructure, and communications, and exchange PhD scholarships for Gulu and UNSW students. As well, UNSW will initiate programs to give students from both universities a richer learning experience, including curricula reviews, best-practice teaching methodology and e-learning. 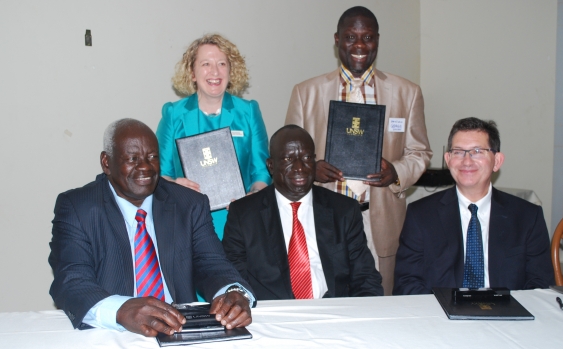 Speaking on ‘The Role of Universities in Transforming Communities’, he observed how the best universities did not stop at the edge of campus, but moved into the surrounding society and were, in turn, influenced and shaped by the society and its needs. “Universities should be role models for the communities they serve,” he added, “displaying transparency and openness, sound governance and a rigorous meritocracy, and encouraging freedom of thought and expression and a diversity of views.”

Although universities were expected to drive innovation and solve problems, he said, the main product of any great university was human capital. “That can be economic, enabling people to get better jobs, unlocking entrepreneurial activity and creating new enterprises, and generating productivity. But it can also be social, helping to eradicate age-old problems in health, addressing inequality and prejudice and generating community interaction.” Human capital could also be political, he added, providing the leadership to build and sustain state institutions and inclusion. “It can be cultural too, developing national identity through history, languages, literature and the arts. And it can be personal, producing graduates who become role models for others to follow.”

Professor Jacobs said Uganda had seen much suffering since gaining independence in 1962, but it had also displayed remarkable strength – its people had overcome enormous challenges to reach a point of solid economic growth and relative stability. The absolute key to the country’s future, he said, was education at all levels. “Gulu is leading the way and our team at UNSW will do all we can to work with you,” he added. 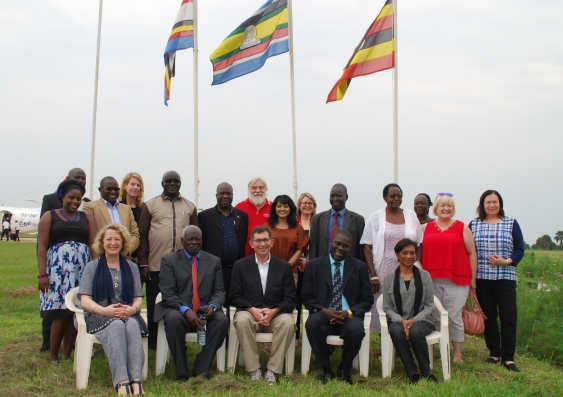