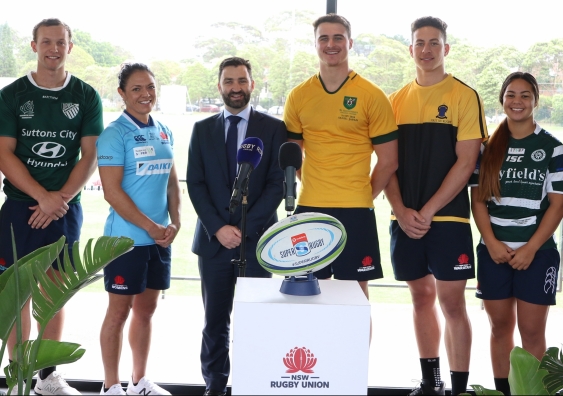 NSWRU CEO Andrew Hore (third from left) celebrates the involvement of local rugby clubs at the announcement of the soon-to-be-built Centre of Excellence at the David Phillips Sports Complex. Photo: Julius Dimataga

UNSW Sydney and NSW Rugby Union (NSWRU) have announced plans for a Centre of Excellence to be built at the David Phillips Sport Complex.

Use of the centre will be shared between NSWRU and UNSW, with the university aiming to create a base for a number of high-performance clubs including rugby, cricket, AFL and hockey.

The centre will provide up-and-coming student athletes the opportunity to experience the elite athletic environment from an early stage in their sporting careers.

"The David Phillips Sports complex was developed as the home of UNSW Rugby some 50 years ago and it is now the new home of rugby in the state," Morrison said.

"The partnership with NSW Rugby and the opportunity to access facilities of this level will help in growing our club and it will now link a professional team to grassroots rugby which will be a benefit to both."

NSWRU CEO Andrew Hore thanked the university for its ongoing involvement in the development of rugby in NSW.

He believes the State government's investment of $20 million in the facility will have wide-ranging benefits across the rugby community.

"We’re delighted and we’re extremely proud of what’s been achieved over the past two years to bring this investment into our sport," Hore said.

"It’s largely investment in our vision, which is around care, connect and unifying the game in NSW.

"This piece of infrastructure is a physical sign of where we want to go as a sport."

The NSW Waratahs will use the facility as their training base, with high-performance staff working alongside grassroots and community engagement staff from NSWRU.

Also to be accommodated at the Centre of Excellence will be the philanthropic arm of NSWRU - the Positive Rugby Foundation - and a new charities hub.

Hore says the charities hub will enable the elite athletes to understand they have a wider responsibility in sport as role models.

The building of the facility will strengthen the partnership between UNSW and NSWRU and create opportunities for the university to engage with charity, youth and community groups.

This connection to the local community will assist in the development of ongoing projects within the area and create natural recruitment pathways between NSWRU junior programs and UNSW.

The long-time partnership between the two organisations has resulted in stars such as Ned Hanigan, an Australian international and member of UNSW’s Elite Athletes and Performers Program, as well as a host of other emerging players.

As part of the partnership, UNSW has branding on the back of the Waratahs jerseys for the men’s and women’s Super Rugby teams, as well as on signage points around the ground at every home match.

The process for finalising the architectural detail for the Centre is expected to take about six months, with the aim to commence construction of the new facility towards the end of 2019.