UNSW and Sydney FC partnership launches into a new season

With the W-League and A-League seasons now upon us, UNSW is proud to support some of the best male and female players in the country. 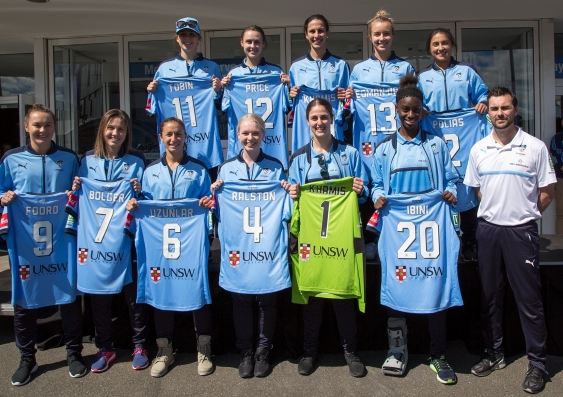 UNSW will again be supporting some of Australia’s most promising football talent this season thanks to the ongoing partnership with Sydney FC.

The Sky Blues recently officially launched their 2018-19 campaign at a gala lunch at The Star, with the UNSW Sport team in attendance.

The partnership between the two organisations extends back to 2016, with the UNSW logo appearing on the playing shirts of the W-League team and the shorts of the A-League team.

Students of the university can access the on-campus supporters’ club as well as a range of other benefits, including the opportunity to purchase discount memberships and free ticket offers throughout the season.

“UNSW is proud to once again partner with Sydney FC as they embark on their 2018-19 campaign,” he said.

“We’re excited to be associated with this highly successful club and inspired by their fostering of young talent.

“We’re looking forward to the season ahead and can’t wait to support the Sky Blues from the stands, along with our passionate student and staff fanbase.”

Recently, UNSW dropped into Sydney FC training to give our students the opportunity to get to know their favourite players.

The excitement at the 2018-19 season launch event was palpable, with both the men’s and women’s Sydney FC teams hopeful of improving their positions from last season and finishing as champions of their respective leagues.

The hot topic of the day was the redevelopment of the Sydney Football Stadium, which the teams have called home since their inception.

Over the next three years, home games will be played at the Sydney Cricket Ground and local suburban grounds across Sydney.

Guest speakers at the launch, the Hon. Stuart Ayres MP, Minister for Sport, and Tony Shepherd AO, Chair of the Sydney Cricket Ground Trust, were quick to reassure fans that the wait would be worth their while, promoting the facilities and amenities of the new stadium with great enthusiasm.

Following this discussion, the teams were presented to the crowd along with recognition of UNSW as a major partner.

Captains Teresa Polias and Alex Brosque spoke with passion and hope about the forthcoming season and their teams’ prospects.

With the W-League team losing last season’s grand final, and the A-League team failing to qualify for the decider despite finishing on top of the ladder after the regular season, both squads are highly motivated to take their game to the next level to win the championships in 2018-19.

Sydney FC’s A-League team started their season with a 1-1 draw against Adelaide on Friday, with their first home match at the SCG on Saturday 27 October against Western Sydney Wanderers.

The W-League team start their season on Thursday 25 October against Wanderers, and their first home fixture is against Melbourne Victory at Kogarah’s Jubilee Stadium on Sunday 25 November at 2:30pm.