Nine UNSW projects to receive funding under the ARENA Research and Development Program. 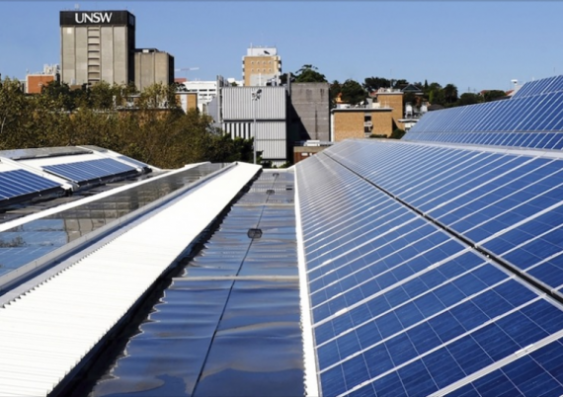 UNSW Sydney researchers have been awarded a share of $41.5 million from the Australian Renewable Energy Agency (ARENA) Research and Development (R&D) Program to support research and development (R&D) and commercialisation activities that aim to significantly reduce the cost of solar.

The researchers from the School of Photovoltaic and Renewable Energy Engineering (SPREE) at UNSW Engineering will receive more than $29 million for nine projects across the Cells and Modules stream, and the Balance of System, Operations and Maintenance stream. Both streams have the potential to reduce the levelised cost of solar PV and improve cell and module efficiency.

“UNSW researchers are clear leaders in the area of renewable energy R&D,” Prof. Fisk said. “The PERC solar cell, which today is embedded in almost 75 per cent of all solar panels in the world, was invented at UNSW. Professor Martin Green and his UNSW colleagues have today secured further funding to continue this exemplary research to improve the performance, lower the cost and improve the sustainability of commercial solar cells.

“These awards announced today will further enable our researchers to help solve the world's shifting and dynamic energy needs as we move post-haste to a sustainable energy paradigm,” Prof. Fisk said.

Professor Nicholas Ekins-Daukes is leading a project that builds on a decade of singlet fission research by Professor Tim Schmidt, School of Chemistry, who is the scientific director of the research. The project has received a $4.8 million grant from ARENA for research into singlet fission solar cells. Current silicon solar cell technologies attain efficiencies above 26 per cent in commercial processes yet the absolute efficiency limit for silicon solar cells is 29 per cent so a new approach is required to surpass that level. The project will use an established photophysical process known as singlet fission that can exceed 30 per cent efficiency and maintains low manufacturing cost.

Professor Bram Hoex is the lead CI on the ‘Optimal O&M-strategy and LCOE-modelling for ground-mounted PV’ project which has received a $3.7 million grant from ARENA. The project aims to significantly improve solar power measurement and financial prediction for optimal performance. There will be a particular focus on the specific operations and maintenance (O&M) requirements of the 5B MAVERICK solar system that offers ultra-low-cost deployment but presents unique O&M challenges due to its proximity to the ground and high-ground coverage. The project will be run in collaboration with industry partners Sun Cable, 5B and PV Lighthouse who have provided an additional $3.7 million in cash support.

Scientia Professor Martin Green is the lead CI on the ‘Rear-Junction p-type PERC/TOPCon Hybrid Solar Cells’ project which has received a $3.7 million grant from ARENA. The project aims to improve the performance and lower the costs of commercial solar cells by combining two technologies originally conceived at UNSW, the commercially dominant PERC technology and a ‘tunnel-oxide-polysilicon-contact’, now known as TOPCon. The hybrid is essentially a standard gallium-doped PERC cell designed to respond to light on both front and rear surfaces, ‘flipped-over’, with the diffused phosphorus layer, normally on the top surface but now on the rear, replaced by a phosphorus-doped ‘tunnel-oxide-polysilicon-contact’.

Scientia Fellow Associate Professor Brett Hallam is lead CI on the ‘Silver-lean screen printing for sustainable low-cost industrial PV manufacturing at the terawatt scale’ project which has received a $3.3 million grant from ARENA. This project addresses the most pressing issue for terawatt-scale solar, silver consumption, which cannot be solved by end-of-life management in the short to mid-term as the industry continues to grow. The project builds on previous work and knowledge to develop a novel screen-printing approach to overcome limitations of conventional metallisation designs to reduce silver consumption and metal/silicon interface area independently of printing capabilities.

Professor Xiaojing Hao, ARC Future Fellow, is lead CI on the ‘Efficient and Stable Chalcogenide-Si tandem cells: integrating commercialized PV technologies’ project which has received a $3.1 million grant from ARENA. The project aims to achieve the cost reduction of utility-scale solar PV by developing cutting-edge chalcogenide/silicon tandem cell technology. By working closely with world-leading chalcogenide and Si PV manufacturers, this project will provide next-generation, high-performance, durable and cost-effective tandem cells that can be rapidly scaled up.

Professor Thorsten Trupke is the lead CI on the ‘Daytime Inspection Solutions for Advanced Operation and Maintenance of Solar Farms’ project which has received a $2.8 million grant from ARENA. The project aims to develop commercial inspection solutions which will become part of routine operation and maintenance for solar farms. The inspection solutions will enable testing of crystalline silicon photovoltaic modules in utility-scale solar farms. A key element of the project is further adaptation of photoluminescence imaging, a technology first developed at UNSW, for field inspection in full daylight, including the use of robotic solutions or aerial drones. The project includes Murdoch University as research partner organisation and several industry partners.

Associate Professor Ziv Hameiri is the lead CI on the ‘Industrial high-throughput inspection methods for high-efficiency multijunction solar cells’ project which has received a $2.7 million grant from ARENA. The project aims to develop advanced characterisation methods for the next generation of solar cells. These methods will provide manufacturers and researchers with detailed information about the performance of their solar cells at extremely high throughput. The project brings together UNSW and leading PV companies to make solar cells even better.

Associate Professor Ziv Hameiri is the lead CI on the ‘Balance of System, Machine learning applications for utility-scale PV’ project which has received a $2.5 million grant from ARENA. The project aims to develop an automated decision-making platform for the O&M of utility-scale PV power plants. The project aims to detect, classify and predict degradations and faults and to provide an action list to optimise the performance of the plant. The project brings UNSW together with a wide range of leaders in the areas of O&M, asset management and ownership of PV plants.

Scientia Fellow Associate Professor Brett Hallam is also lead CI on a second grant, the ‘Low cost and sustainable PV systems for the terawatt scale’ project which receives $2.4 million from ARENA. A pressing issue for terawatt-scale deployment of PV systems is consumption of materials (silicon, copper, aluminium, steel and concrete), due to the sheer volume required and associated emissions. This project will use life-cycle-analysis, yield analysis, and calculate levelised cost of electricity to address material issues for terawatt-scale deployment of PV systems and the associated impact on cost and the environment.