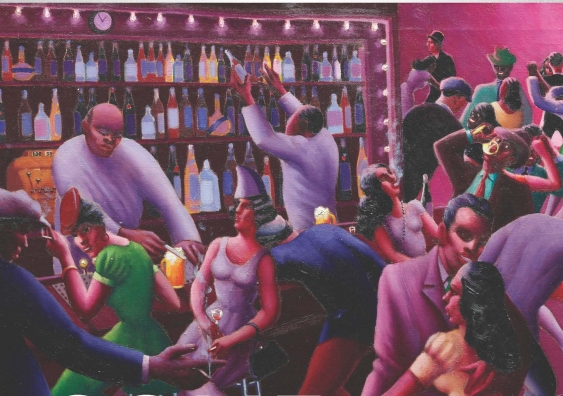 Some of These Days: Black Stars, Jazz Aesthetics and Modernist Culture

But Some of These Days extends beyond pure biography to recreate the rich community of actors, architects, poets, directors, and musicians who interacted with – and were influenced by – each other.

Donald highlights how the sense of excitement and artistic renewal ushered in with the ‘New Negro Movement’ reverberated far beyond Harlem and its surrounds, to major international cities such as London, Paris, Berlin and Vienna.

He underscores the relationship of African-American aesthetics to the modernist movement that flourished from the 1920s until the end of World War II. Vivid portraits of eccentric and popular artists like T. S. Eliot, André Gide, Carl Van Vechten, Marlene Dietrich, Josef von Sternberg, Jean Gabin and Adolf Loos animate the sweeping narrative.

Some of These Days illustrates the immense cross-cultural collaboration of film, song, dance, and literature that coalesced to create modernist culture – where the new rhythms of the machine age were gleefully embraced, allowing art to consider the new possibilities of cosmopolitanism in a modern world.

Inside Australia’s Anti-Terrorism Laws and Trials

Threats of domestic terrorism exist – as was demonstrated by the Sydney siege in late 2014 – but are Australia’s exceptional national security laws really necessary? This timely book is a clear-eyed guide to Australia’s vast body of anti-terrorism laws enacted since 2001, and asks some fundamentally important questions: have these laws been effective in protecting the community or do they represent a long-term threat to the health of Australian democracy? And perhaps most importantly, it asks whether accepting these laws as normal is a danger in itself.

Written by Australia’s leading experts in the field, this book reveals the findings of a comprehensive, cross-institutional study into how our gas resources can be converted into fuel for transport. The transport sector in Australia depends heavily on imported oil-based fuels. Natural gas, however, can be converted into a conventional liquid fuel at a modest cost. This study shows its use as a fuel could increase our self-sufficiency by 50-70% by 2030. And with three-quarters of our freight being moved by road, it’s clear that these developments will have major benefits for Australian transport efficiency.

Everything You Need to Know About the Referendum

This book explains everything Australians need to know about the proposal to recognise Indigenous peoples in the Constitution. It details how the Constitution was drafted, and shows how Aboriginal and Torres Strait Islander peoples came to be excluded from the political settlement that brought about the nation. It explains what the 1967 referendum – in which over 90% of Australians voted to delete discriminatory references to Aboriginal people from the Constitution – achieved, and why the Constitution still permits people to be discriminated against on the basis of their race. Written by two of the country’s foremost legal experts, it is essential reading on what will be a landmark moment for the nation.

There is money to be made from cosmetics, medicines and health foods generated from plant extracts. Unfortunately, this money usually doesn’t return to the local communities where the resources grow. The Nagoya Protocol to the Convention on Biological Diversity could help control this practice of bio-piracy, as it sets out a legal framework for the ‘fair and equitable sharing of benefits’ arising from the use of genetic resources. However, there is still considerable confusion about how it can be implemented. This book, full of case studies, will help policy makers design effective implementation strategies in order to benefit conservation and indigenous peoples. Routledge