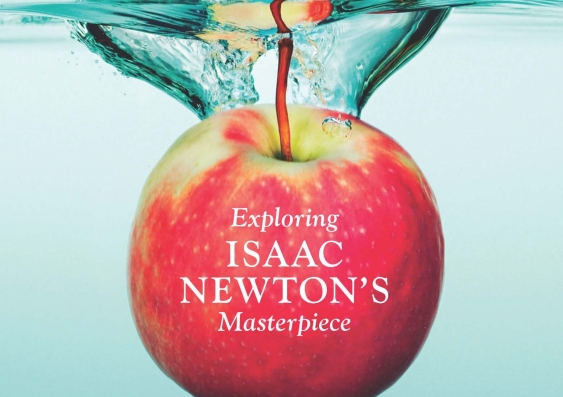 “All that has happened since 1687 is a gloss on the Principia,” Nobel laureate and physicist Steven Weinberg once wrote. Despite its dazzling reputation, Isaac Newton’s Philosophiae Naturalis Principia Mathematica, or simply the Principia, remains a mystery for many people. Even among the most intellectually curious of readers, including professional scientists and mathematicians, few have actually looked at the Principia or appreciated its contents. Pask, author of Math for the Frightened: Facing Scary Symbols and Everything Else That Freaks You Out About Mathematics, seeks to remedy this by guiding the reader through Newton’s masterpiece, a volume regarded by many as the greatest scientific contribution of all time.

Drawing from the final edition of the Principia, Pask walks the reader through Newton’s seminal exposition of science: establishing the framework of classical mechanics and explaining terrestrial phenomena like the tides and projectile motion as well as the dynamics of the solar system and the paths of comets. It includes scene-setting biographical chapters about Newton and the scientific developments of his time, as well as analysis of the Principia’s reception and influence to the present day.

Universities are mostly large and complex places and new students can feel easily overwhelmed, isolated, even lost – particularly those from the bush and abroad. College is an essential bridge for many between lectures and exams and the lighter side of study. In this book Claire Scobie explores the history of The Kensington Colleges, a cornerstone of student life at the University of New South Wales. Established more than 65 years ago through generous bequests, Basser, Philip Baxter and Goldstein colleges have touched the lives of more than 10,000 students. Many early residents came to the colleges through the Colombo Plan and have since taken on leadership roles throughout Asia, seeding a vibrant diaspora of UNSW alumni with fond memories of Australia and their time on campus. Scobie recounts the stories behind each college’s culture, support network, social life and many achievements, and discovers why past and present residents are so loyal to their college.

A Revolutionary History of Interwar India

A Revolutionary History delivers a fresh perspective on the ambitions, ideologies and practices of the anti-imperial Hindustan Socialist Republican Army (HSRA), formed by Chandrashekhar Azad and Bhagat Singh in 1928. Maclean offers a new interpretation of the activities and political impact of these north Indian anti-imperial revolutionaries, long overshadowed by Gandhi, who advocated the use of political violence against the British in the interwar years. Drawing on visual culture studies, the book also considers recently declassified government files, memoirs and interviews to explore HSRA’s place in Indian history.

Comparative constitutional law is a field of increasing importance around the world, but much of the literature is focused on Europe, North America and other English-speaking jurisdictions. The importance of Asia for the broader field is demonstrated here in original contributions that look thematically at issues such as freedom of religion, constitutional courts, property rights and emergency regimes, with special attention on how they have been treated in East Asian jurisdictions. Dixon’s volume finds a region grappling with complex constitutional issues and global developments, while pursuing distinctive local solutions that deserve close attention.

(Sub)Urban Sexscapes: Geographies and Regulation of the Sex Industry

Commercial sex premises and products are now part of mainstream city life – from urban streets to suburbia the aesthetics of sex permeate billboards, newspapers, magazines, television, music videos and online. (Sub)Urban Sexscapes examines the spatial and regulatory contours of the sex industry from a range of different perspectives including urban planning, geography, sociology and cultural and media studies, in countries including Australia, the UK, the US and North Africa. It argues that the role of sex in the character of a city cannot be ignored and advocates for evidence-based policy over moral panic.