UNSW Sydney is installing a second rainwater capture and reuse pit under its Kensington campus to reduce stormwater damage and replenish water supplies in the local area. 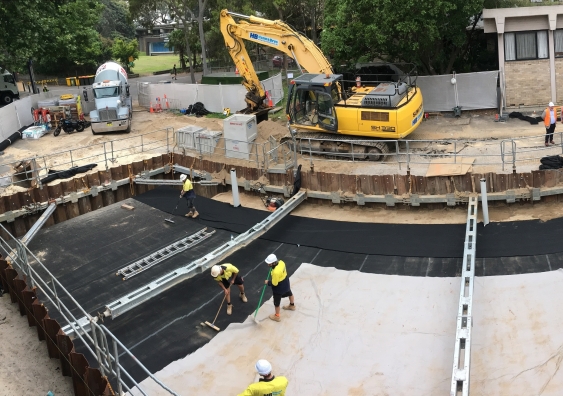 In a year of normal rain, the University's system will return 30 megalitres of stormwater to Botany Sands Aquifer.

UNSW Sydney is expanding its landmark rainwater capture project with the installation of a second percolation chamber below the Kensington campus. The additional pit will help drain stormwater from 90% of the campus into the Botany Sands Aquifer which lies beneath the University.

As well as replenishing the aquifer, which is used as an additional water supply by local residents and industry, the percolation system takes pressure off Kensington's stormwater pipes by channelling water into the aquifer rather than the councill stormwater system.

The original stormwater retention chamber is one of Sydney’s largest percolation pits and was installed in 2007 under Village Green oval. The second chamber built near UNSW’s Roundhouse venue will take advantage of stormwater flows that are not captured by the system under the Village Green.

The estimated collected stormwater per year is equivalent to 20 Olympic swimming pools. Bore water is then extracted from the aquifer and reused to supply 43% of the total campus water demand.

Claude Pelosi, UNSW Engineering Services Senior Manager, said: “This system is a win for water sustainability, the environment, and the University’s bottom line.

Changes to water usage and conservation on the Kensington campus over the past 11 years have achieved a 45% drop in consumption of potable water.

“Instead of using drinking water to flush our toilets, we substitute bore water in as many contexts as possible. This includes the University pool, which is 100 percent treated bore water, toilets, all irrigation, laboratory uses and air conditioning.”

The changes to water usage and conservation on the Kensington campus over the past 11 years have achieved a 45% drop in consumption of potable water, assisted by other water saving initiatives such as low-flow taps, low-flush toilets and the use of water efficient cooling towers. The reduction is despite a 10% building growth on the site.

Mr Pelosi said that by returning water to the aquifer, UNSW was essentially using it as a giant rainwater tank.

“With over 60,000 students and 6000 staff, the University is like a small city. With a larger percolation system, we’re able to capture more rainwater, replenish the aquifer and reduce pressure on the region’s drinking water resources,” he said.

William Syddall, UNSW Environmental Sustainability Senior Manager, said: “UNSW has an important role to play in not only researching and teaching about sustainability issues but demonstrating sound practices on our campuses. The expansion of our landmark aquifer recharge project allows UNSW to further reduce potable water usage despite an increase in student numbers and total building area.”

The new chamber will be 30 metres long, 10 metres wide and 4 metres deep. It will increase rainwater capture by 20% compared with the original pit built in 2007. A milk-crate-like structure is used to create an empty space where stormwater is collected. The water is then allowed to seep slowly through the sandy soil and into the aquifer.

In a year of normal rain, the system will return 30 megalitres of stormwater to the aquifer.

The new tank will be operational in early 2019.