Be entrepreneurs, take responsible risks and contribute to society, former prime minister John Howard urged graduates during a ceremony in which he received an honorary Doctorate of Laws – UNSW's highest honour. 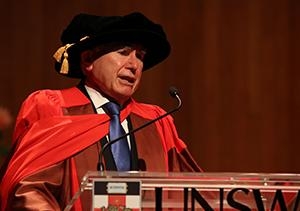 UNSW has honoured the outstanding achievements of former Prime Minister, the Hon John Howard, with the degree of Doctor of Laws honoris causa at a graduation ceremony in Sydney today.

The honorary degree recognises John Howard’s significant service to the nation as Treasurer and the 25th Prime Minister of Australia (1996–2007). His Liberal–National Coalition government was re-elected three times and John Howard is the second longest serving Australian PM after Sir Robert Menzies.

“John Howard’s accomplishments as Prime Minister are many and enduring and it is fitting that we confer on him the University’s highest honour,” the Vice-Chancellor Professor Fred Hilmer said.

“John Howard becomes an alumnus of this great institution, and he is in good company. He now shares close ties with UNSW and everyone graduating this week. He also joins a family circle with his wife Janette, who received a BA from UNSW; his son Timothy who has a UNSW BCom LLB and MBA; and his son Richard who graduated from UNSW with a BCom LLB.”

The ceremony was presided over by Professor Hilmer and UNSW Chancellor Mr David Gonski.

"John Howard was not one to shy away from controversy in what he believed to be in the best interests of the country," Professor Hilmer said. "His achievement on gun control is even more significant given the failure of the United States government to achieve a similar result today."

In his occasional address, Dr Howard said graduates should be proud of their achievements and urged them to focus on three things in their post-university lives.

"Contribute to your society, be responsible risk takers – you never get progress without taking risks – and equally importantly, be entrepreneurial – it's at the heart of successful civilisations," he said.

Dr Howard also paid personal tribute to the men and women of the Australian Defence Forces, and made special reference to the significance of international students.

"During my travels overseas I would often meet leaders of government and business who had studied in Australia and who remembered their time here with warmth and gratitude," Dr Howard said.

"It was a warming experience to be reminded of that again and again... and no institution has been more responsible for that than the University of New South Wales." 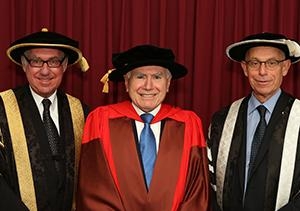