The annual Gandhi Oration was delivered by the Chief Advocate for World Vision Australia, Rev Tim Costello, at UNSW Sydney this week. 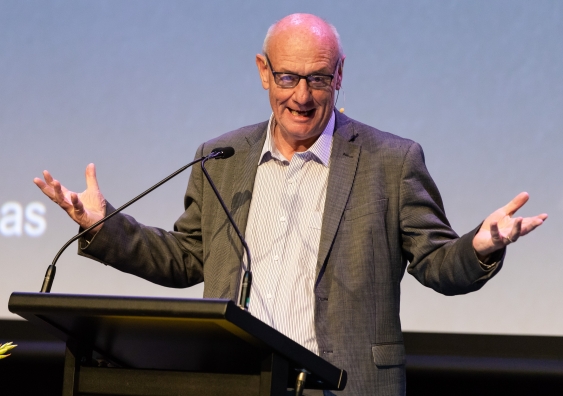 Launched in 2012, the Gandhi Oration is delivered by a person whose life work exemplifies the ideals of Gandhi. The oration is preceded by a remembrance ceremony at the Gandhi bust on the Library Lawn. The ceremony includes the lighting of a ceremonial lamp, the singing of two hymns and a minute’s silence before dignitaries place floral tributes on the bust of Gandhi. 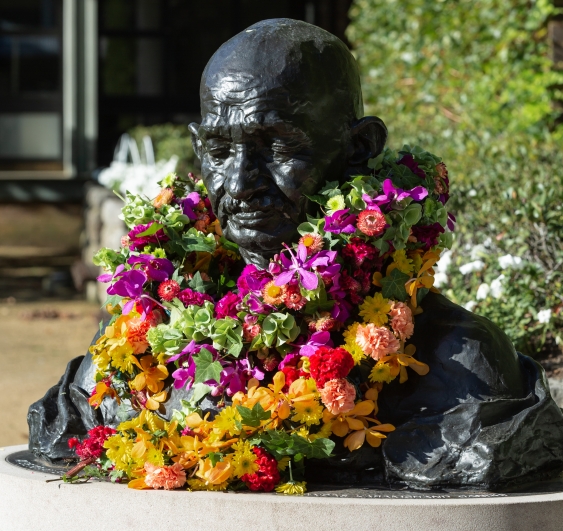 The Gandhi bust at UNSW, adorned with flowers after the Gandhi Remembrance Ceremony. Photo: Jacquie Manning

The events signify the close ties between India and UNSW. The University is the only higher education institution in Australia to celebrate Martyrs' Day and is home to one of only two bronze sculptures of Gandhi in the country. UNSW also hosts the annual Gandhi Jayanti, a celebration of Gandhi’s birthday on 2 October.

During the commemoration on Wednesday, UNSW President and Vice-Chancellor Professor Ian Jacobs articulated the University’s role in continuing Gandhi’s vision for dismantling injustice, and championing human rights for all by bridging geographic and cultural divides through collaboration and student exchange. The University has identified India as a key strategic partner in its 2025 Strategy. 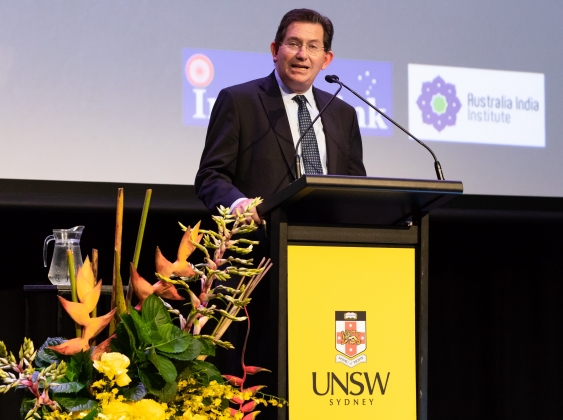 “UNSW is delighted that our partnerships in India are ever-growing in breadth and depth,” Professor Jacobs said. “We acknowledge that we are fortunate to partner with a country that has held knowledge and learning in high esteem for millennia.”

“I wanted to take this opportunity to say how proud I am that UNSW enjoys such a harmonious relationship with our Indian partners – and I look forward to the successes we will achieve for our communities because of that.”

This year’s oration was delivered by Tim Costello AO, one of Australia’s leading voices on social justice and humanitarian issues. Rev Costello, currently Chief Advocate for World Vision Australia, said the fundamental issues Gandhi addressed almost a century ago – poverty and hunger, violence, war and injustice – still remain as the world grapples with the mixed benefits of the rise of globalisation, retribalisation, marginalisation of minorities and divisive populist politics.

“Many decades ago before the technological revolution with iPads, search engines, Facebook, Twitter and social media, Gandhi warned that people might learn to fly like birds and swim like fish but it would be of little use and even a disaster if they forgot how to walk like human beings,” Rev Costello said.

He implored audience members to play a role in ensuring a fair and just society and to remain optimistic that our world can change for the better.

“All of us have to be a part of the solution. We all have gifts, privileges and talents to make a difference,” Rev Costello said. “Gandhi’s ideal of self-sacrifice over self-interest, individual obligations over individual rights, renunciation over consumption, and self-sacrifice over violence still ring true.”

Rev Costello concluded with a Gandhi quote: “In a gentle way you can shake the world with the power of your beliefs, with the power of your conviction, with your devotion to the invincible truth. Love and truth are faces of the same coin, both very difficult to practise, and the only things worth living for.”

To commemorate the 150th anniversary of Gandhi’s birth on 2 October 2019, UNSW is releasing a book featuring a compilation of each Gandhi Oration since 2012.