Professor Peter Reuter, who received the 2019 Stockholm Prize in Criminology this month, has been mentoring Professor Alison Ritter from UNSW’s Social Policy Research Centre for 20 years, since the early days of the Drug Policy Modelling Program. 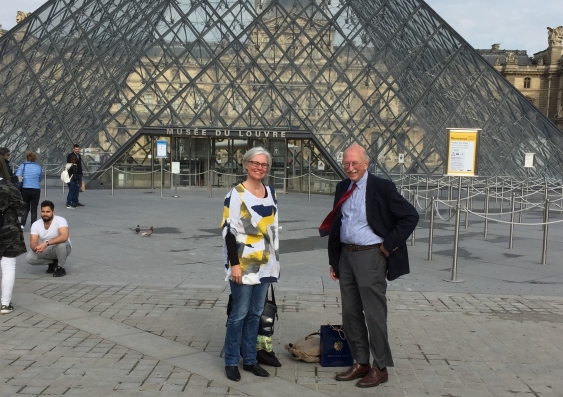 Professor Peter Reuter, from the School of Public Policy and Department of Criminology at the University of Maryland, is a joint recipient of the 2019 Stockholm Prize in Criminology. The jury, recognising both a policy scholar (Professor Reuter) and an elected official (Ruth Dreifuss), praised them for “shaping clearer choices about drug abuse” and “for their work as champions of creating better evidence, including field tests, of the effects of drug policy innovations on crime and harm.”

Professor Alison Ritter is Director of the Drug Policy Modelling Program (DPMP) at UNSW’s Social Policy Research Centre (SPRC) in the Faculty of Arts & Social Sciences. She is a National Health and Medical Research Council (NHMRC) Senior Research Fellow, leading a multidisciplinary program of research on drug policy, and has published widely in the field.

UNSW is very much “the family university”, according to Professor Reuter. His father, Dr Fritz Reuter, was a founding faculty member of UNSW in the School of Chemistry, initially as an organic chemist. He was the foundation head of the then Department of Food Technology from 1953 until his retirement in 1970. Professor Reuter studied economics from 1962 to 1965 and was a Teaching Fellow before heading to Yale for his PhD. Three of his sister’s sons are also connected to UNSW: Nicholas Danta graduated in philosophy, Associate Professor Mark Danta is in the Faculty of Medicine and Associate Professor Chris Danta is in the School of Arts & Media in the Faculty of Arts & Social Sciences.

When and how did you meet?

Peter Reuter: I met Alison almost 20 years ago when she was starting a major drug policy project. Her plan was to create a research program very much like the one I had begun 15 years earlier at RAND. It would conduct a variety of projects spanning many disciplines and aspects of drug policy. I was delighted to be able to help, particularly because it was an Australian project. No one else had attempted anything as ambitious and comprehensive.

Alison Ritter: Before I met him, Peter’s work – notably his well-known book Drug War Heresies, published in 2001 – had influenced my way of thinking about drugs and drug policy and decisions of government. I was introduced to him through my then mentor (Professor Margaret Hamilton). An opportunity arose for Peter to advise us on shaping a new Australian research program focused on drug policy, which led to a large successful philanthropic grant.

How did the mentoring relationship come about?

PR: I served on the advisory board for the DPMP from the time it started in Melbourne through its transition to UNSW. I had the pleasure of seeing Alison develop from a young researcher, still feeling her way from psychology to policy research, to the confident head of a sophisticated and prominent research team. Some of her PhD students are now senior researchers and Alison is now a widely respected figure in the international drug policy world. When she succeeded me as president of the International Society for the Study of Drug Policy (ISSDP), she was able to bring in new communities of scholars and to make the society more secure.

AR: As an advisor to the program I was leading, Peter provided invaluable intellectual and policy insights that facilitated the success of the DPMP. Annual visits to Australia for a week of intense work with the drug policy team provided a chance not only for me, but for other drug policy team members to learn from him.

How has that relationship changed over time?

PR: Alison and I have co-authored one article. More importantly, we help each other through discussion of what’s going on in the drug policy research world. We bring different sensibilities to the field. I am still an economist at heart, inclined to seek simplification of complexity, and she brings the training of a social psychologist and reflects her experiences in program measurement.

AR: Aside from the role as an advisor to my research program, Peter has encouraged and introduced me to other people in the drug policy field and provided opportunities for me, such as a leadership position in the international society he established. Our skills are very complementary, and we have worked closely in developing and maintaining the international society. We now sit on a number of committees together – for example, the United Nations Office of Drugs and Crime, World Drug Report Scientific Advisory Committee – and, as such, I see us as colleagues now. I still call on his incredibly wise counsel though!

Alison, what have you learnt from and about Peter?

AR: Lots! From Peter I have learnt not only all the basics of drug policy, but I have come to understand the various disciplinary perspectives that bring a richness to the field. I regard him as a criminologist, economist, social scientist, public policy expert, epidemiologist and political scientist all wrapped up into one. In fact, I realise that I don’t know his base discipline (is it economics, Peter?), but this speaks to the breadth and depth of his scholarly work and intellectual endeavours. This is why he has been such a fabulous person to have as a mentor, and as someone to collaborate with.

Alison, if you had the time over, would you have done anything differently?

AR: Despite substantial time together, evolving drug policy ideas and working on establishing an international society to support drug policy scholars, we have never actually written a grant together and only have one co-authored paper. This is not a regret per se, but it is an interesting reflection on how the relationship has been important from a professional development, collegiate point of view without the usual trappings (grants and papers). Indeed, one thing both Peter and I share in our academic lives is a commitment to conducting commissioned research, with its more direct, instrumental capacity to influence governments. As a result, I have less time to publish ‘high science’ – Peter seems to manage it!) – because we do spend much time engaged with the real world of making better drugs policy.

Would you recommend academics find a mentor?

PR: Mentoring has been one of my principal sources of satisfaction in the last decade. At the Stockholm Symposium, as much as I loved the pomp and circumstance of the award ceremony, my principal satisfaction was a private dinner with 15 collaborators who had come to celebrate with me. Research is more fun with other, preferably younger, researchers.

AR: Yes. I have been blessed with a number of outstanding mentors over my career, Peter being the most recent – and most long-lasting. A mentor can do so many things: provide intellectual stimulation and advice outside your usual circles; introduce you to others in your field; support you to achieve your goals; and be available as a sounding board and provide confidential advice at critical career moments.

The NDIS needs to be better. Here's how to ensure your child can access the system if they need it