A round-up of the top news stories at UNSW. 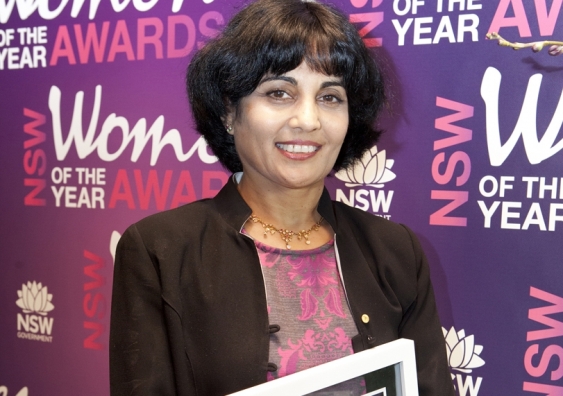 NSW Woman of the Year

Professor Minoti Apte has been named the 2015 NSW Woman of the Year for her contributions to medical research, tertiary education and the Indian community.

Based at the Ingham Institute, Apte is director of the Pancreatic Research Group and is an acknowledged world leader in alcohol-induced pancreatic injury and pancreatic cancer.

She was the first in the world to develop a method to isolate pancreatic stellate cells, a technique that provided a much-needed tool for studying the path that scarring of the pancreas takes. She is leading pre-clinical studies to suggest new treatments for the fifth leading cause of all cancer deaths in Australia.

Adolescents with substance abuse problems could benefit from a new treatment approach developed by a UNSW researcher awarded a prestigious Fulbright scholarship. Dr Emma Barrett (pictured), from the National Drug and Alcohol Research Centre, is one of five staff and graduates selected to study in the United States.

UNSW has the highest number of 2015 Fulbright affiliations. Other UNSW recipients are: Isaac Donnelly from the School of Mathematics and Statistics; Renxun Chen from the School of Chemistry; Sean O’Toole from the NSW Department of Family and Community Services and a graduate of UNSW’s Master of Arts; and UNSW Conjoint Associate Professor Stuart Tangye of the Garvan Institute.

Scientia Professor John Gascoigne (pictured) will have a new audience at Harvard. He’s been awarded the esteemed Gough Whitlam and Malcolm Fraser Chair in Australian Studies, alongside fellow historian Penny Russell. The year-long position will commence in 2016.

Previous recipients include former Prime Minister Whitlam, historians Manning Clark and Geoffrey Blainey, and former Australian of the Year Tim Flannery. Gascoigne will teach a course on Australia and the Pacific, and another on science, the state and society. He will also pursue three research projects including an ongoing ARC-funded investigation into Australia as a secular state.

After a national call-out that attracted 250 applicants, five early-career researchers have been selected as the Top 5 Under 40, an initiative of UNSW and ABC Radio National (RN) to mark 40 years of The Science Show. The winners will produce programs for RN as ‘Scientists in Residence’. “They applied learnings from their disciplines in ways you would never predict,” said Professor Fiona Stanley (UWA) of the five successful STEM researchers. Stanley was a member of the judging panel alongside Robyn Williams, presenter of The Science Show, and Professors Lesley Hughes (Macquarie University) and Merlin Crossley (UNSW).

The teachings of Gandhi are more relevant than ever, with Islamophobia, terrorism and climate change standing in the way of peace, his granddaughter Ela Gandhi says. A peace activist and former South African MP who spent nine years under house arrest during the anti-apartheid struggle, Ms Gandhi delivered UNSW’s fourth Gandhi Oration, held each year on the anniversary of the Mahatma’s assassination. Ms Gandhi stressed her grandfather’s ideals of non-violence and simple lifestyle which, she believes, hold the key to solving some of modern society’s biggest problems, including the cycle of extremist violence and environmental destruction.

The Chair of the Royal Commission into Institutional Responses to Child Sexual Abuse has launched a landmark UNSW-led study into the long-term impacts of growing up in care. Justice Peter McClellan said the ‘Forgotten Australians’ study, led by Professor Elizabeth Fernandez, is an important step in strengthening the voice of the estimated 500,000 Australians who were raised in care, and to improve modern-day service provision.