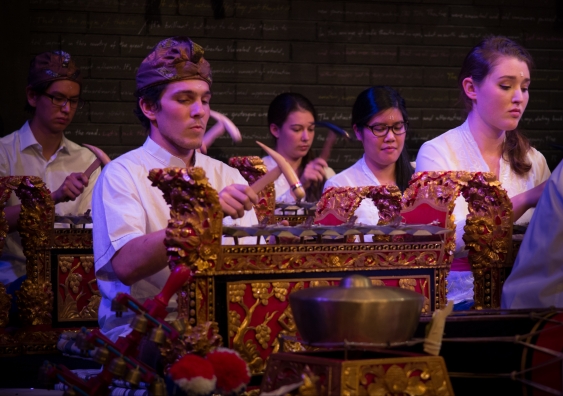 The ancient sounds of Bali

Indonesian dignitaries attended the premiere concert of UNSW's Balinese Gamelan ensemble, where music students played a range of traditional percussive instruments. A Balinese dance and ritual blessing preceded the performance, which was held at the  Io Myers Studio.

He gave a Gonski

I gave a Gonski: Selected Speeches, a book by UNSW Chancellor David Gonski, has been launched in Sydney, with  the help of Communications Minister Malcolm Turnbull.

Around 170 people from business, politics, education and the not-for-profit sector joined Mr Turnbull and Mr Gonski at the launch at UNSW’s CBD Campus.

In the collection of previously unpublished speeches, Mr Gonski reveals what drove him – the son of Polish/South African immigrants – to the highest echelons of public life as one of the country’s leading businessmen and philanthropists.

Royalties from the sale of the book are being donated to the University, to be distributed to the ASPIRE program, which helps thousands of disadvantaged school students consider higher education. The UNSW Foundation is also working with ASPIRE on a fundraising initiative.

It’s the first – and most popular – free online legal resource in Australia and this year marks its 20th anniversary.

“When we set out, we didn’t have any reason to suspect its influence would spread so far for so long,” says UNSW Professor Graham Greenleaf of the Australasian Legal Information Institute (AustLII), which he co-founded with Professor Andrew Mowbray from the University of Technology, Sydney in 1995. Today, AustLII’s 670 databases receive more than 600,000 hits each day, with users sourcing legal information from all Australasian jurisdictions.

“It began because we were frustrated that there was a monopoly on computerised legal information,” says Greenleaf. “The government  used crown copyright over legislation and case law to limit free  access to the law. Our intention in creating AustLII was to provide free access to the Australian public  to the essential legal information needed for the rule of law and democracy to function effectively.”

The resource, which relies on charitable donations from users, has revolutionised access to justice in Australia and enabled similar legal information access platforms to take shape around the world.

A new approach to ovarian cancer detection developed by UNSW Vice-Chancellor Ian Jacobs could lead to widespread screening for the disease that kills about two in three sufferers in Australia. The method uses a statistical calculation to interpret changing levels in women’s blood of a protein called CA125, which is linked to ovarian cancer. A 14-year trial, involving more than 46,000 women over the age of 50 who had ongoing blood tests, found the new method detected cancer in 86% of women. This is more than double existing screening methods, which look for a fixed threshold amount of the protein.

UNSW has claimed the top spot nationally for Accounting and Finance in the 2015 QS world university rankings, with 18 of our subjects in the world’s top 50. Accounting and Finance was placed 12th in the world and leads the University’s top performers. Rounding out UNSW’s five subjects in the top 20 are Civil and Structural Engineering (14), Law and Psychology (both 15), with the newly introduced subject area of Business and Management Studies ranked 19th.

Professor Merlin Crossley and his  team have shown that changing just  a single letter of the DNA of human red blood cells in the laboratory increases their production of oxygen-carrying haemoglobin – a world-first advance  that could lead to a cure for sickle cell anaemia and other blood disorders. Their gene-editing technique switches on a gene, which is active in the womb, but turned off in most people at birth. By keeping that gene switched on for life, the researchers hope they can alleviate symptoms. “Because the good genetic variation we introduced already exists in nature, this approach should be effective and safe,” says Professor Crossley, who  is Dean of UNSW Science. 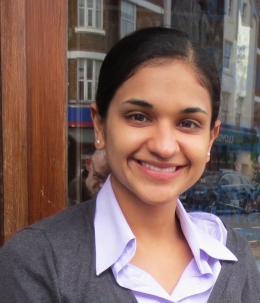 UNSW lecturer and alumna Aditi Vedi has been awarded a prestigious Gates Cambridge Scholarship to research the functional biology of stem cells to improve survival outcomes for children with leukaemia.“Despite increasing cure rates for children with leukaemia, relapsed disease still carries a poor prognosis,” said Vedi, who is a conjoint associate lecturer with UNSW’s School of Women and Children’s Health. The prestigious scholarship program was established in October 2000 by a donation of $210m from the Bill and Melinda Gates Foundation. Vedi was one of 54 successful candidates from 28 countries, and will begin her PhD at the University of Cambridge later this year. 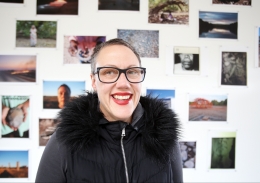 Celebrated artist and curator Brenda L Croft  has been awarded an Australia Council National Indigenous Arts Award to develop Solid/shifting ground, a multimedia artwork detailing her father’s experiences as one of the Stolen Generation. Croft is an ARC Research Fellow at the National Institute for Experimental Arts at UNSW Art & Design. She will stage her exhibition at the UNSW Galleries next year. Croft says being awarded the Fellowship, worth $90,000 over two years, is one of the highlights of her career. “I want to write my father’s story for his grandchildren, so they know they are following in the footsteps of those who fought for equal rights for all of us.” 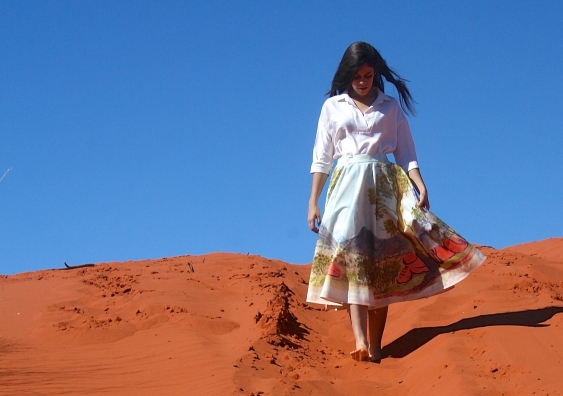 We are in Wonder LAND explores how contemporary Aboriginal desert art is breaking new aesthetic and political ground through the use of new mediums –  and old mediums in new ways.

The exhibition brings together works by over 30 artists from 18 remote desert community art, media and educational organisations, and 11 different language groups. Drs Jennifer Biddle and Lisa Stefanoff from the National Institute for Experimental Art at UNSW have curated the works in partnership with Philip Watkins, CEO of Desart Inc, a peak body representing 42 central and western desert art centres.