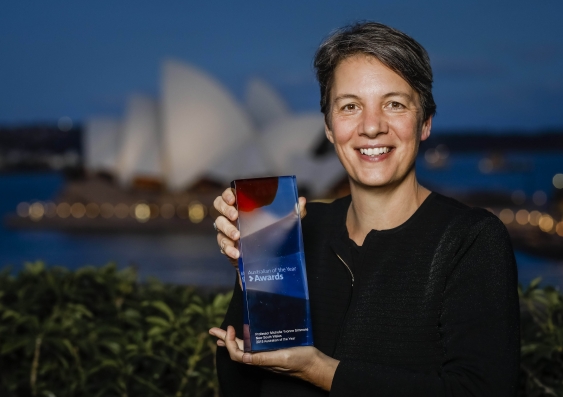 UNSW scientist Michelle Simmons has been named 2018 NSW Australian of the Year.

Scientia Professor Simmons, Director of the Australian Research Council (ARC) Centre of Excellence for Quantum Computation and Communication Technology, CQC2T, was awarded the honour at a ceremony in Sydney on Monday night.

The pioneering physics professor is now in the running for the title of Australian of the Year, to be announced on 25 January in Canberra.

Simmons was recognised for her work in the "space race of the computing era". She is the leader of a 200-strong team that is working to develop a full-scale quantum ecosystem, including technologies for computing, information storage and communications.

Simmons’ team is the only one in the world that can make atomically precise devices in silicon. They have produced the world’s first single-atom transistor as well as the narrowest conducting wires ever made in silicon, just four atoms of phosphorus wide and one atom high.

"This is a much-deserved honour.  Michelle is an outstanding scientist and inspirational leader," said UNSW Dean of Science Professor Emma Johnston.

"Her Centre of Excellence team is ahead in the international scientific race to build a quantum computer in silicon. And she has shown great leadership in building strong links with industry and government to commercialise the University’s world-leading technology, resulting in the launch of Australia’s first quantum computing company, Silicon Quantum Computing Pty Ltd, in August."

NSW Premier Gladys Berejiklian said the Australian of the Year Awards celebrated the selfless contributions and wonderful achievements of Australians.

"Their dedication to the issues that affect our State and our nation ignites discussion, raises awareness and improves our lives,” Berejiklian said.

"Leading by example, they inspire all of us to make a difference in our communities. On behalf of the people of NSW I thank them for their contribution to NSW and wish everyone the very best of luck for the national announcement."