UNSW President and Vice-Chancellor Professor Ian Jacobs has been appointed the new Chair of the Group of Eight universities. 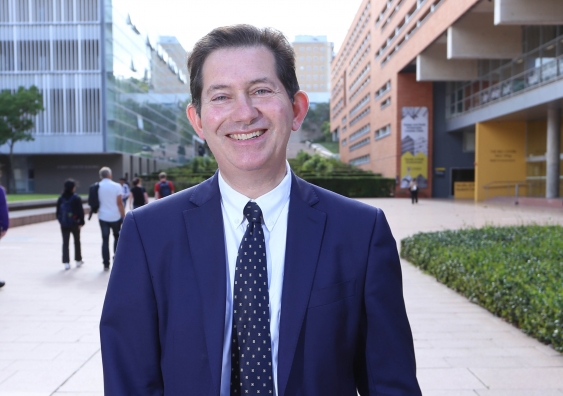 UNSW Sydney President and Vice-Chancellor Professor Ian Jacobs has been appointed as the Group of Eight’s (Go8) new Chair and will take up the role on 1 February 2018.

Professor Jacobs has been a strong advocate of the power of higher education to change lives – through education, employment, thought leadership and the impact of research.

As Vice-Chancellor at UNSW, he has implemented a bold new strategy to promote excellence in education, research, social engagement and knowledge transfer with global impact. He is also recognised as a world-leading researcher in the field of cancer and women’s health, and has a strong humanitarian focus, establishing medical charities and institutes as well as a health program in Uganda.

“Professor Jacobs has been a supportive Go8 deputy Chair during 2017, and we now look forward to working with him as Chair,” said Go8 Chief Executive Vicki Thomson. “Professor Jacobs has made it clear that he intends to use his year at the helm focusing on taking universities into the community, building stronger partnerships, and continuing to highlight the vital role universities play in Australia.”

“Universities have an important role to play in today’s society, both socially and economically. Our challenge as the Go8, and as university leaders, is to ensure that our universities deliver their full potential for Australia.

“Australia’s universities are world-class and our third largest international export. We need to effectively explain their importance to all in Australia. The sector has a key role in educating and training outstanding graduates, in generating economic strength through the application of stellar research, in delivering the benefits of international education, and in thought leadership to address the big issues facing Australia and the global community.”

The 2018 Deputy Chair is Professor Dawn Freshwater, Vice-Chancellor of the University of Western Australia.

“Go8 research universities are anchor institutions in our communities,” said Professor Freshwater, “and I am keen to work with Professor Jacobs and the Go8 team to highlight the enormous contributions our graduates and our research make to the nation.”

Ms Thomson said the Go8 thanked the outgoing Chair, Professor Peter Høj, Vice-Chancellor of the University of Queensland. “It has been a difficult and complex year for the sector as we deal with unresolved political and funding issues, and we thank Professor Høj for his leadership during this time,” said Ms Thomson.

“The Go8 looks forward to working with this strong team.”

The Go8 represents Australia’s eight leading research intensive universities, with seven of its members ranked in the world’s top 100 universities. The group supports 50,000 jobs and delivers 92,000 quality graduates each year. It educates one in three international students who choose to study onshore in Australia, enrolls one third of Australia’s post graduate students and carries out $6 billion in research each year ($2.5 billion funded by Government) and 99 per cent of its research is rated as world class or above.

ASEAN summit: universities are our gateway to the region